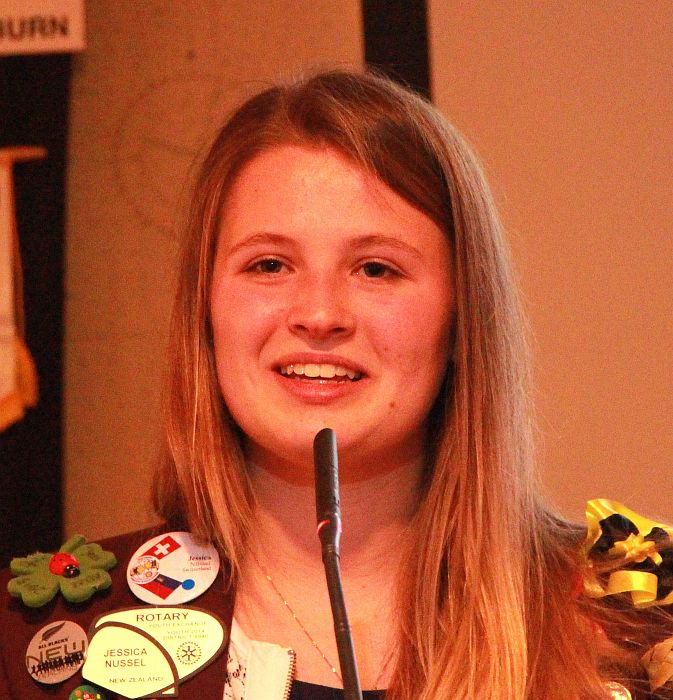 When Rotary Youth Exchange student Jessica Nuessel arrived at Plimmerton Rotary from Switzerland in July 2014, her main aims were to become fluent in English, and to learn about New Zealand and its culture.

Speaking at the Club meeting on 23rd June, Jessica confirmed she had well and truly achieved her two goals. In an emotional and confident farewell presentation, Jessica was full of praise for everyone at the Club but especially her host families: John and Cherryl O’Connell, Dianne McGavin, Bruce and Sue Couch, and Ron and Jenny Lucas. Through their generosity she had travelled the length and breadth of NZ, and learned so much from them.

“I’ve seen the most amazing things – I’ve been to all the tourist spots around your beautiful country, and have loved every minute of it.”

Jessica had especially enjoyed tramping in our great outdoors, swimming in Lake Taupo and in Milford Sound, kayaking, caving, sky diving, sailing, rafting, watching the Hurricanes –“ I’ve had such a wonderful time, and you here at Plimmerton Rotary have just been so good to me.” 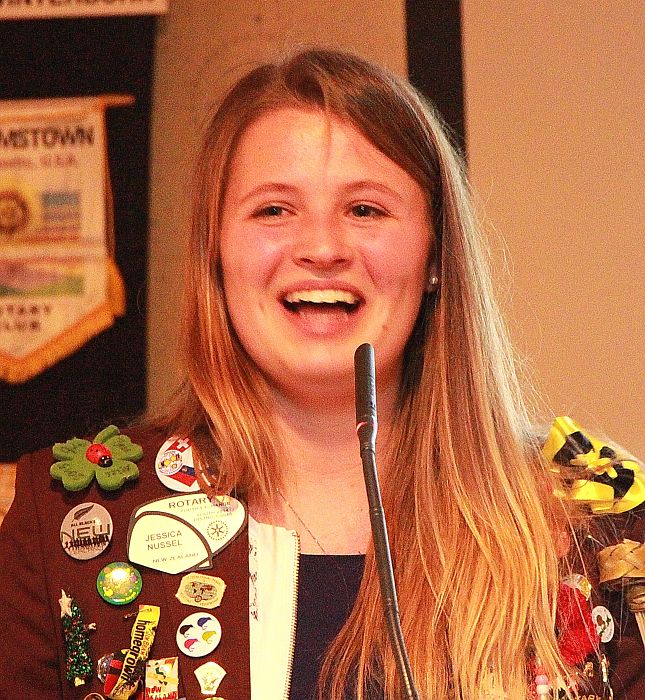 “I was determined to never let an opportunity go by, and if I had my time over again I wouldn’t do anything different.”

Jessica spoke fondly of the close friendships she had made at Aotea College, as well as being able to play her favourite sport, volleyball. “I was the only white face in the team! I chose to take Maori as a subject while at Aotea and really enjoyed it. I learned a lot about Maori culture.”

Two experiences at Aotea stood out: the formal dance, and the senior awards ceremony. “At our colleges back home, there is no such thing as a formal, or a prize giving, so they were really special events for me to be a part of.”

“I have grown so much in the past year. I have been pushed out of my comfort zone many times but have learned how to deal with it and to realise what I’m capable of. I’m much more relaxed now when speaking to groups.

“Thank you Rotary for what you do for young people around the world of my generation. Rotary Youth Exchange is a very special programme. “

And the most memorable moment of her year in NZ?  “The bubbling mud in Rotorua. It just keeps on … bubbling and … bubbling! It’s fantastic!”

President Chris presented a synopsis of his presidential year, running through the substantial list of excellent speakers, off site visits, activities, entertainment and projects participated in by the membership of the Rotary Club of Plimmerton. The club has gained ten new members and lost four, three by moving away and the fourth through the sad loss of much respected long-time member Gordon Wellwood.

Before Chris commenced on his presentations the meeting was hijacked by President Elect Adrienne Murray to inform the audience of the motion passed at the last Board meeting when Chris had been commended on the excellent job he had done during his presidential year in the most adverse of circumstances while caring for his wife Trish through her terminal stage of cancer. Chris received a much deserved standing ovation. 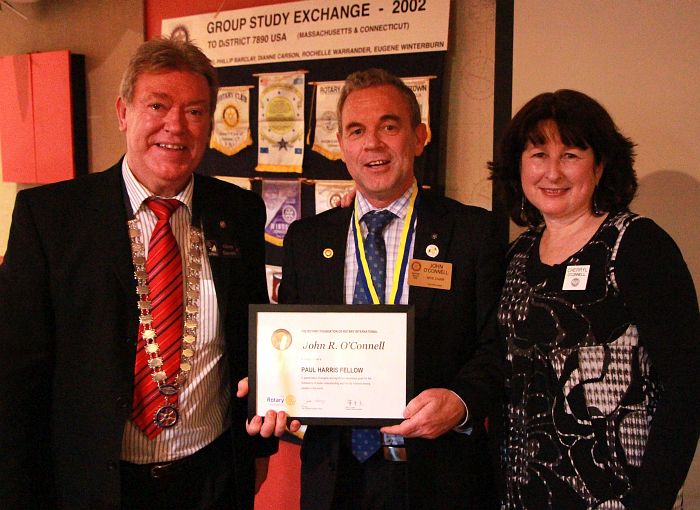 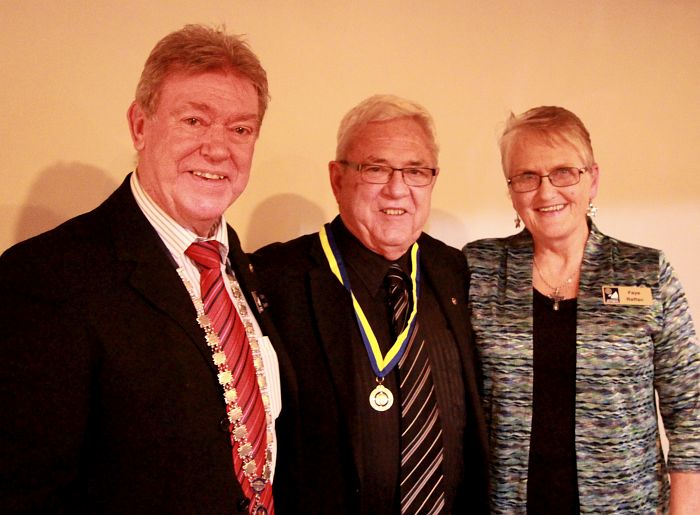 The meeting continued with two well-earned Paul Harris Fellowships:  John O’Connell particularly for his involvement with International Student Exchange at both Club and District level -  the presence of three  students in the audience was particularly fitting; and Bob Austin for his support of Chris this year, and Graeme Blick in his District Governor role, as well as his time and effort for the two Prime Ministers breakfasts.

Other awards were presented to Julie McLagan for the Special Speech contest and to Wendy Betteridge for the website;

to Bill McAulay for his support to David Knight and Terrie Turner in Youth; and to

David Knight for his support to Chris and Youth through the speech contests;

and to Terrie Turner for her leadership of the Youth Committee. 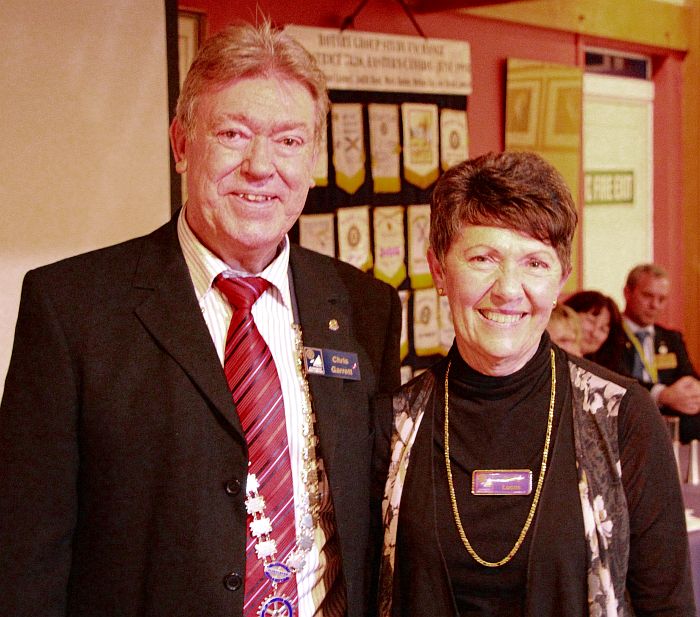 To round off the evening, President Chris, to a long drum roll, announced that the President Nominee for 2017-2018 would be Jenny Lucas. "Jenny has served as Board Member for Communications this year and after supporting both Randall & Ron through their Presidencies Jenny is well equipped to take on this role. Thanks also to Jenny for covering the website whilst Wendy was overseas and for all the years she was the Editor of the Bulletin."

High Hopes
The second successful round of interviews for Aotea students took place on Tuesday 23 June. Thanks to Philip Whearty for coordinating this event.

Bubbling Mud
+ Text Size -
Do NOT follow this link or you will be banned from the site! Original generation time 2.3135 seconds.