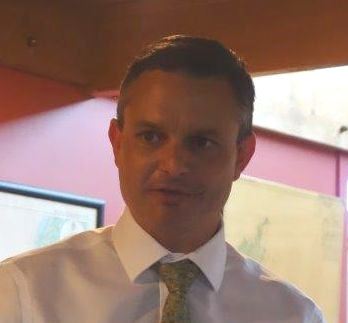 Caring for the environment and being highly profitable are not mutually exclusive aims for any business. In an engaging and intensely interesting presentation at Plimmerton Rotary on 2nd February, Green Party Co-Leader James Shaw described a multinational company which had been achieving both of these goals since 1995.

Interface Incorporated is a large global carpet manufacturer with plants and offices in several countries. In 1995 its visionary CEO, Ray Anderson, began promoting the idea that his company would become the first fully sustainable commercial enterprise in the world by 2020, by which time net emissions from the company’s activities would be zero.

The company was well down the road to achieving its aims with outstanding progress on many fronts. Waste products generated by the company had fallen 94% during the 21 years since 1995. Some 49% of the raw materials for its carpets currently came from biologically sustainable or recyclable sources such as bamboo and wood, whereas previously, nylon (which is derived from oil) accounted for half of the company’s raw material needs.

The company had previously not utilised renewable energy sources at all, but currently a third of its energy needs were from renewable sources. And since 1989, greenhouse gas emissions had fallen 71%.

“These massive changes have come about through Ray Anderson’s drive to instil a culture of innovation, vision and creativity. For example, all off-cuts from the carpet laying process are now recycled, rather than being taken to the tip. The company’s main carpet products now consist of square tiles rather than large rolls of carpet because during the laying process and when replacing sections of carpet, there is less waste and lower cost.”

While all of these changes have been happening, Interface Inc has enjoyed a doubling of sales worldwide and significantly lower costs, leading to a jump in profits. They have been so successful that they have created an in-house speakers bureau because so many other companies have asked for someone from Interface to tell them how to achieve similar results in their enterprises. The speakers bureau is a successful profit centre for the company.

Mr Shaw then suggested that there was no reason why New Zealand couldn’t become “the first fully sustainable country in the world. We have a relatively stable Government structure here, we are already regarded as being a clean and green nation, and we have the expertise and the resources to make it happen. It would probably be easier for NZ to achieve this goal than any other nation on the planet.”

Following Mr Shaw’s presentation there was a lively and prolonged question and answer session during which he gave further insights into his views, including that his party needed to shake off the stigma of its being part of the ‘loony left’; that the NZ tax system could be modified to favour recycling over creating waste; that 61% of our rivers were ‘unswimable’, and that while the amount of waste we produced was not currently a major problem, it would become a problem for the next generation.

Judging by the sustained applause at the conclusion of Mr Shaw’s address, it would probably be fair to say that the majority of his audience would have come away with a more favourable view of what the Green Party actually stood for.

Te Ara Piko
Great News! Resource consent from Greater Wellington Regional Council is now granted, so with Porirua City Council consent already in hand, progress can be made towards final design and the tendering process for construction of the next stage of our Pathway.

Book Fair
There are flyers / posters available to be spread around our community public places to raise awareness of the upcoming Book Fair – one of our major fundraisers. The editor is holding a bundle.

Creekfest
Liz Kelly, PCC Councillor, has asked for support from members of Plimmerton Rotary to conduct a survey at Creekfesf on 12 March, from 12 noon to 2 pm. A group of about 10 people is needed. Contact Allan Nichols.

Group Friendship Exchange
Chris Garret is going to India with others from our Rotary district and the return exchange of a group of Indians is in April. Chris is seeking hosts from our club who would enjoy the experience of welcoming an Indian couple for 4 nights from 11 to 14 April. Our Indian guests will attend our meeting on Tuesday 12 April. Contact Chris.

Virtuoso Strings Concert
A fundraising concert for Virtuoso Strings – a group of young Porirua Children who are learning to play stringed instruments under the expert tutelage of Elizabeth Sneyd – is being organised and planned for 7 pm on 25 June 2016. Tickets will be for sale through members of Plimmerton Rotary and Whitby Probus clubs. More info as it comes to hand.

Shrove Tuesday
Now here is a fun challenge – teams of 3 people will compete at tossing pancakes at 10 am  on Shrove Tuesday (9 February) on Steyne Ave in Plimmerton.  Contact Wendy Betteridge if you’d like to have a go.

Back Row at the Movies
Those hardy souls who braved Revenant with some degree of visual brutality last Friday night can enjoy a more gentle end to this month with 'Dad's Army'.

Porirua Configure Express
This women's gym is under  the new management of Rotarian Debbie Mair. She is offering any Rotarian that joins in February a 10% discount if they use the password: ROTARY.  Here is a flyer with more information. porirua._configure_express

Back to the Future
+ Text Size -
Do NOT follow this link or you will be banned from the site! Original generation time 1.6875 seconds.