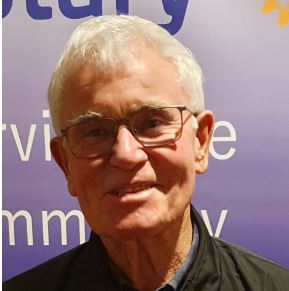 To set the scene I was born 16 May 1945 and I will leave you to do the maths around that. However, it took Rotary until 1973 to wake up to the significance of the day and charter this very club on that very day/month combination.

You probably think my career revolved around movie theatres and growing apples, but this is far from what really happened.

I left school to start an engineering cadetship having tried out as an air force pilot in the 6th form (they said come back next year) and I was under some pressure to go to Sandhurst.

The cadetship was with NZIG the only manufacturer of industrial and medical gases in NZ at the time. together with a substantial welding and medical equipment manufacturing and distribution business. Around then the company was transitioning from being privately owned to being listed with a 51% BOC ownership.

As a younger engineer in learning and green about everything, life was full of experiences. Then, as it is now to a lesser degree gas was supplied in high pressure cylinders which came and went by the truckload, I quickly learnt how to roll two cylinders at a time and stack them horizontally nine high for filling; back breaking work!

All this was supported by machinery which mostly predated WW11. It was all reciprocating (there were no rotary machines then) and high pressure up to 3000psi. Maintenance was critical and challenging. In many cases we remade the broken items as we had some hugely skilled maintenance teams and parts were not in stock anywhere close.

I never finished the cadetship as I went to Christchurch as part of the change out of the old engineers.

After a period, I came back to Wellington to set up a facility for special gases. NZIG had won the contract for LOX supply to the RNZAF so the Skyhawks could fly. It was new territory for all, involving setting up and running an infra-red spectrophotometer and gas chromatographs. These measured to fractions of ppm contaminants in gas. It was interesting and leading-edge stuff, and we were constantly being compared with labs around the world. In this we always did extraordinarily well. This work formed the basis for an extensive gas mixture business that went on to export some speciality gas mixtures.

By then a major problem had arisen in the South Island which meant we struggled to meet demand for oxygen and nitrogen. Serious indeed. With a very pregnant wife we set off to Christchurch to fix the problems. There were many night callouts and long, long hours. The most memorable was to totally dismantle a distillation, column something that had never been done or needed to be done before. It was nightmare as real shots had been fired in frustration at one of our southern branches and of course there was no Irish diplomatic post in the offing for me. It worked.

Unions then were both strong and important to the fabric of work and there were many exciting exchanges of views. There was however respect on both sides and if you saw it as the game it was, things moved along well. Negotiating the national agreement periodically was always somewhat different. The boss was never happy with the outcome and everyone else always thought we never conceded enough!

We then spent some time in Australia before returning to a national marketing role where we were heavily involved in LPG which was part of Think Big and the oil shock, Liquigas was very much part of this. Remember how LPG was to be our saviour?

A time running NZIG’s Southern Region ensued, and this was a lot of fun as we turned the business from a loss to one producing a steady ROI. We also managed collections for NZ from there and ended up with debtor days, the envy of many.

I ended up back here with the responsibility for all BOC which was at the time a $100m business. We had a plan to grow it to $200m which was achieved after I moved on.

From my experience there are usually two people behind the badge.

I was extremely lucky in meeting Janet in Christchurch. We had a longish engagement while Janet pursued her career in Christchurch, and I mine in Wellington. In those days the ferries were magic as I left Wellington at 8.00pm on Friday night to be met by Janet in Lyttleton. We spent the weekend on her parent’s farm in Akaroa and then I was dropped back at the ferry Sunday night to drive to work on Monday morning. The ferries seem to sail come what may then.

We had been married just long enough for us to move into a no cat-swinging flat in Eastbourne when I went to Auckland for three months. There were no trips home or mobile phones, so it was a long three months, particularly for Janet. The crankshaft on a very large compressor had broken so we were running some old plants to keep the market supplied.

This really set the scene for the rest of my career with frequent callouts at night (then we were also called out by the Fire Service to emergencies where gas cylinders were involved) and as the years went by more and more travel. It was rare to be home for a full week so the burden and joy of bringing up two great kids fell pretty much to Janet. When we moved to Christchurch, Janet gave up her career to become a full-time Mum so managing on one income with mortgages that had ever increasing rates and that we never thought we would ever repay was quite the issue. Without Janet’s support I could never have managed the career I had.

After 35 years I decided not to move to Auckland, so I departed the corporate scene and pottered around Pauatahanui growing apples which is where I started this story.

It has been great fun doing all these things over the years and I have been fortunate to see much that others haven’t. BOC was so diverse that we were involved in just about everything from working on igniting the coal underground in Southland to produce a fuel gas, to going beneath the Clyde Dam through the fault line tunnels, now full of concrete, to sourcing liquid helium for the first MRIs, to working with Operation Deepfreeze to get all the gases to the Antarctic, to climbing to the top of a gold mill and sugar cane factory (separately of course). The list goes on.

Janet and I have done much, seen much, learnt much, and enjoyed it all enormously.

Thanks for the opportunity to tell you something about myself and Janet and maybe we could change the name of this spot to “The Badge, the Partner and me”.