Rhondda Sweetman gave us a fascinating talk tonight about how she and Les turned misfortune into a blessing and some of the exciting adventures they experienced in the process. She said ...

'In 1976, we were living North of Hamilton on 10 acres on the banks of the Waikato River. Les was a Head of Science at Ngāruawāhia High School and I was a stay-at-home mum to our two young daughters, Lisa & Gina.  We had just built a new house, were farming some animals- we were living the “good life”.

'What could possibly go wrong?   Well, it did!

'Les got sick!  Very sick. He became skeletal and was told that he would be sick for the rest of his life and to forget about a career.  He was diagnosed with ulcerative colitis and was prescribed drugs that would cause liver damage when taken long-term.

'I was told that I was to blame for his illness! I never found out why! Les didn’t believe the diagnosis and certainly didn’t believe that I was to blame. We had also found that there was a dangerous amount of copper in our house water, originating from the corrosion of the underfloor plumbing. We fixed that problem.  Les stopped taking the drugs he was on and slowly started to get better. He went back to work. I taught a number of his classes while he was sick.

'The whole episode left us very unsettled, feeling that if life was going to be this short we might as well go and see something of the world. 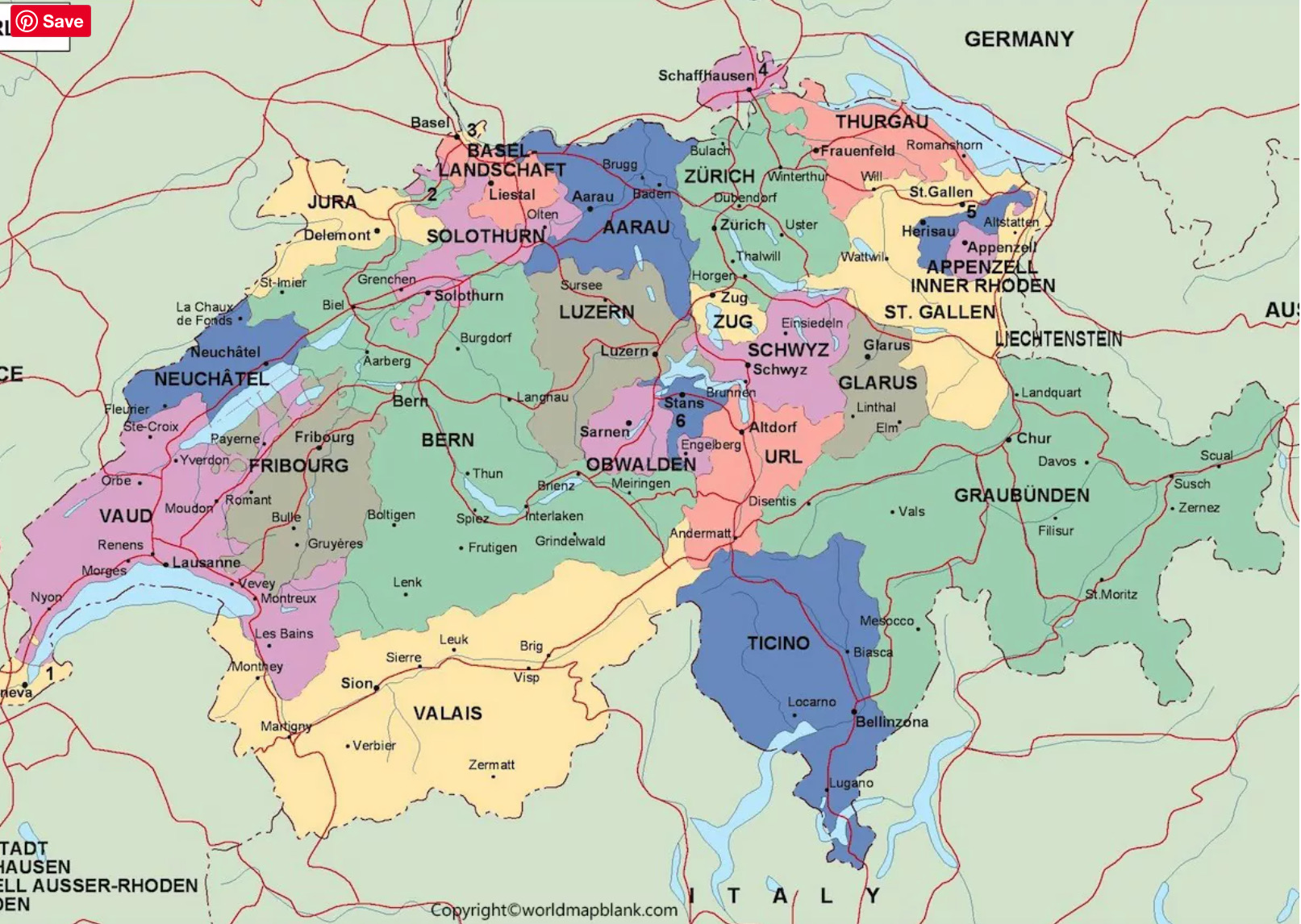 'I got old copies of the London Times Educational Supplement from the Hamilton Library and wrote about 20 applications to International schools around the world.  Much to our surprise, I got two replies - one from the Bahamas and one from Leysin American School in Switzerland.  It didn’t take us long to decide on Switzerland.

'We sold our property and flew to London, stopping for a few days in San Francisco to stay with my brother, and family.  We arrived in London the day Elvis Presley died – 16th August 1977.  We visited friends and relatives in England, bought a campervan, and then boarded a Hovercraft to cross the English Channel.  We made our way to Aigle, in Switzerland, and began 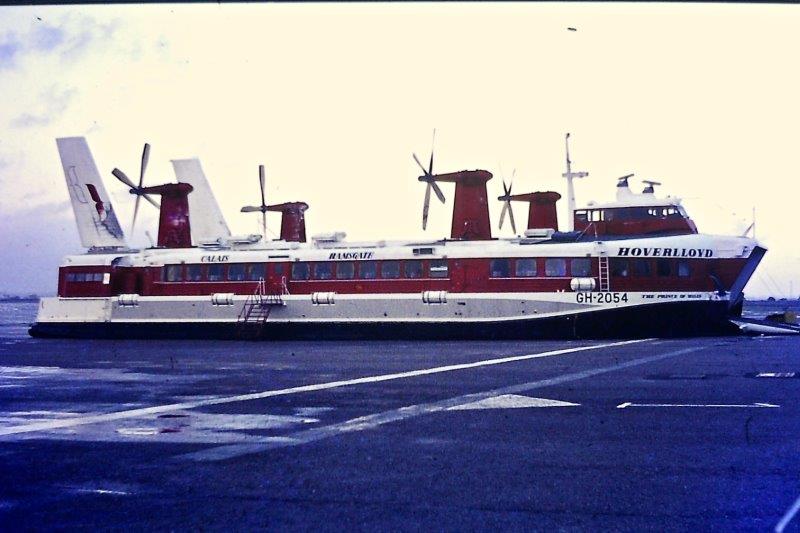 our journey up the mountain to Leysin.

'When we reached 1200m, there it was, and there was the school. We were so relieved.  There had been no way to check out the school, as this was pre-internet days.

'We were warmly welcomed and installed in our apartment on the 5th floor of the school building. The building had been built as a sanatorium for TB patients. There were a number of these buildings in Leysin and they were being used for a variety of purposes. The buildings were insulated with straw and had little in the way of fire escapes. I wouldn’t have stayed there if I had realized how bad it was. Our apartment looked out on the Dents du Midi, Mont Blanc, and the Rhone Valley and faced south. 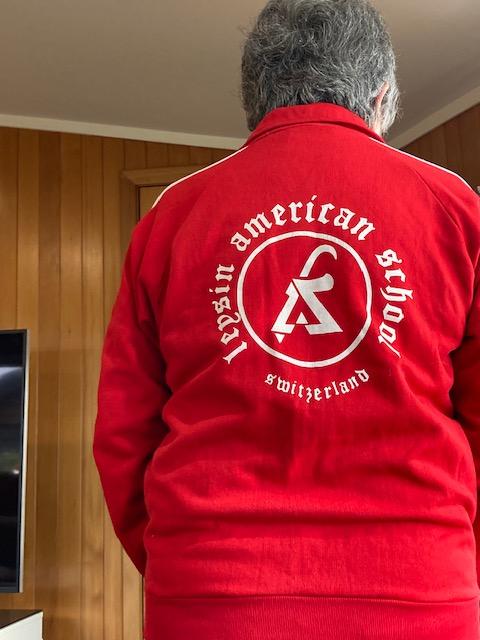 'The school was privately owned by Sigrid and Fred Ott, an American man and his Icelandic wife, who had become Swiss citizens before starting the school in the early 1960s.

'The School was accredited to the American Educational system. When we arrived, we found no schemes of work to follow in any of the subjects we were to teach, so Les wrote back to New Zealand and got the New Zealand Curriculum for the various levels. That was just to check that we didn’t leave anything out.

'The students came from all over the world. Most of the American students had parents working in the Middle East, while others were having a Gap year in Switzerland- after having finished High School in the US but not being old enough to go to College, i.e. they were very bright.

'Non-American students were keen to get into US universities and many of them did.  We had students from one of the Iranian Royal families, others from fabulously wealthy backgrounds, while 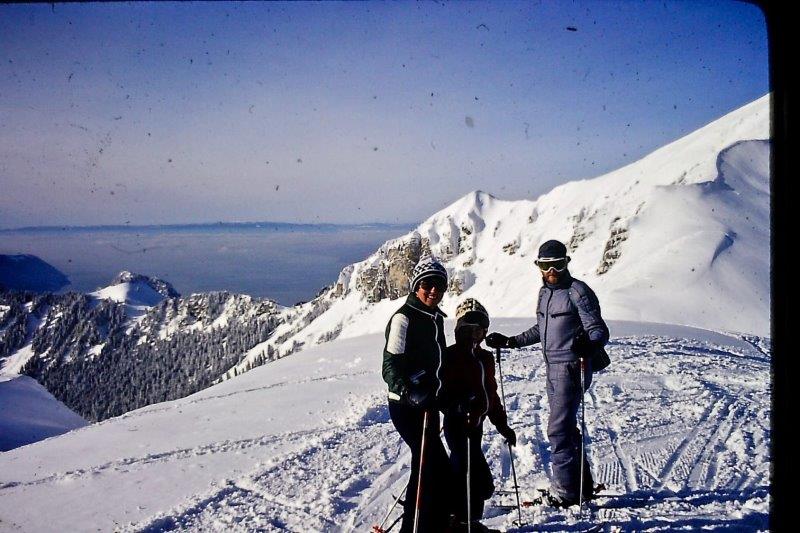 some of the Americans were from relatively impoverished families. In winter, we were required to take the students skiing on two afternoons a week. The nearest ski lift was 100m up the road.  The students would hit the ski slopes and that would be the last that we would see of them. We would be left with the ski instructors, who had been paid to teach the students, so we were the ones who got the ski lessons.

'As part of their time at the school, the students also went on trips to various parts of Europe. It was difficult for us to be part of these trips, as we had our two daughters at school. I did manage to go on one trip to England – to Devon and London. It was quite an experience being with a group of wealthy Iranians in rural Devon - they really didn’t know how to cope with it. You should have heard their protests when we went down a narrow country lane and the vegetation hit both sides of the bus. They were in their element when we reached the hotel in Knightsbridge in London.

'There were many social events arranged for the students e.g. a ball in a Chateau on the edge of Lake Geneva in France (we travelled by boat), a trip to Gstaad to hear Yehudi Menuhin give a violin Concert - to mention two. 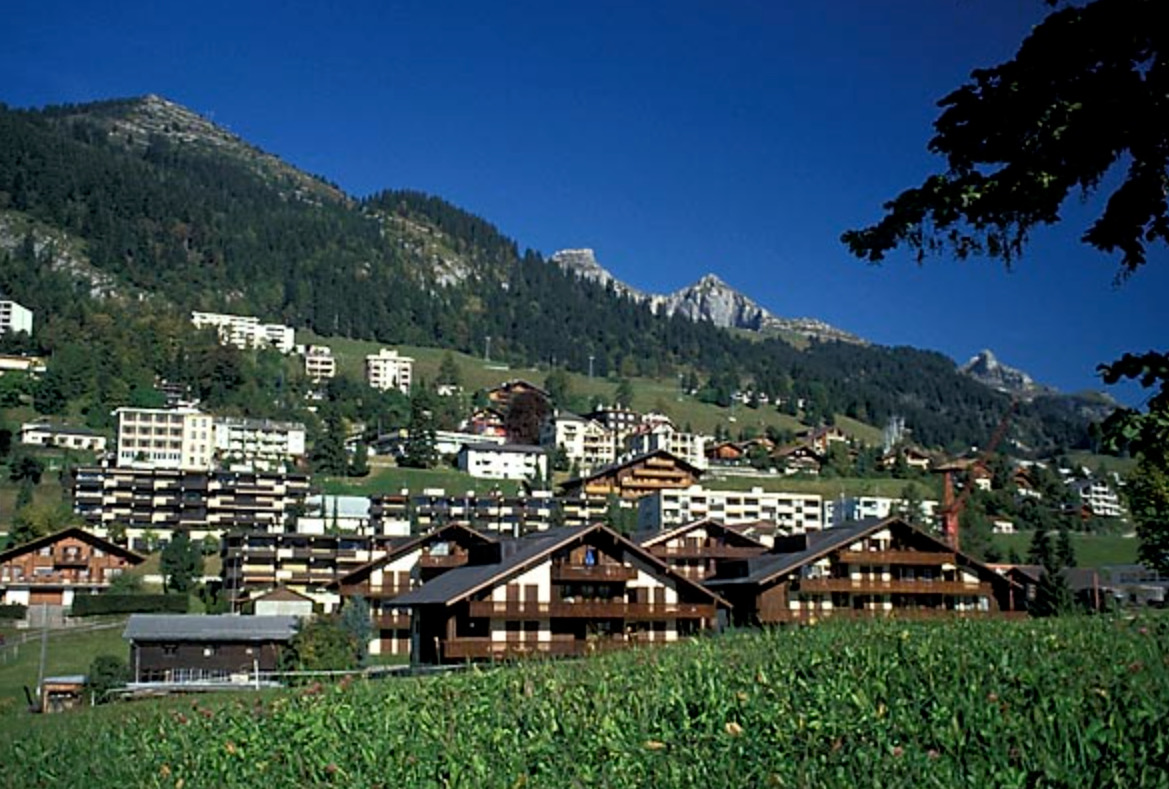 'Les also lectured part-time at the College in the Village.  Their idea of social activity for the staff was to give us a weekend in Paris, in a good quality hotel. We did go to Paris on other occasions, but it was nice being treated to a weekend there by the College.

'We settled Lisa and Gina into their local school, where the teaching was all in French. Fortunately, some of the other teachers had children, so there was a group of English-speaking children. We paid Madame Blanc to give them French lessons every day after school, which she did while feeding them pain au chocolat.

'Lisa and Gina never complained and always willingly went to school. I was horrified when I realized that the first French words they came home with were all swearwords.

'After 9 months, Lisa had to sit the equivalent of the British 11+ exam. A lot of the local children had tutors It was a big deal for the children, as it determined whether they would stay in the local school or go to the academic College down in the valley.  Only one student passed and, as a result she became a bit of a local celebrity. That was Lisa.  She scored highly on the Maths test and the non-verbal intelligence test. So, in her second year in Switzerland, Lisa had to catch the cog-wheel train down to the valley at 7.30am, wander around Aigle (with friends) for the two hours that the school closed at lunchtime and then catch the cog train back at about 4.00pm. 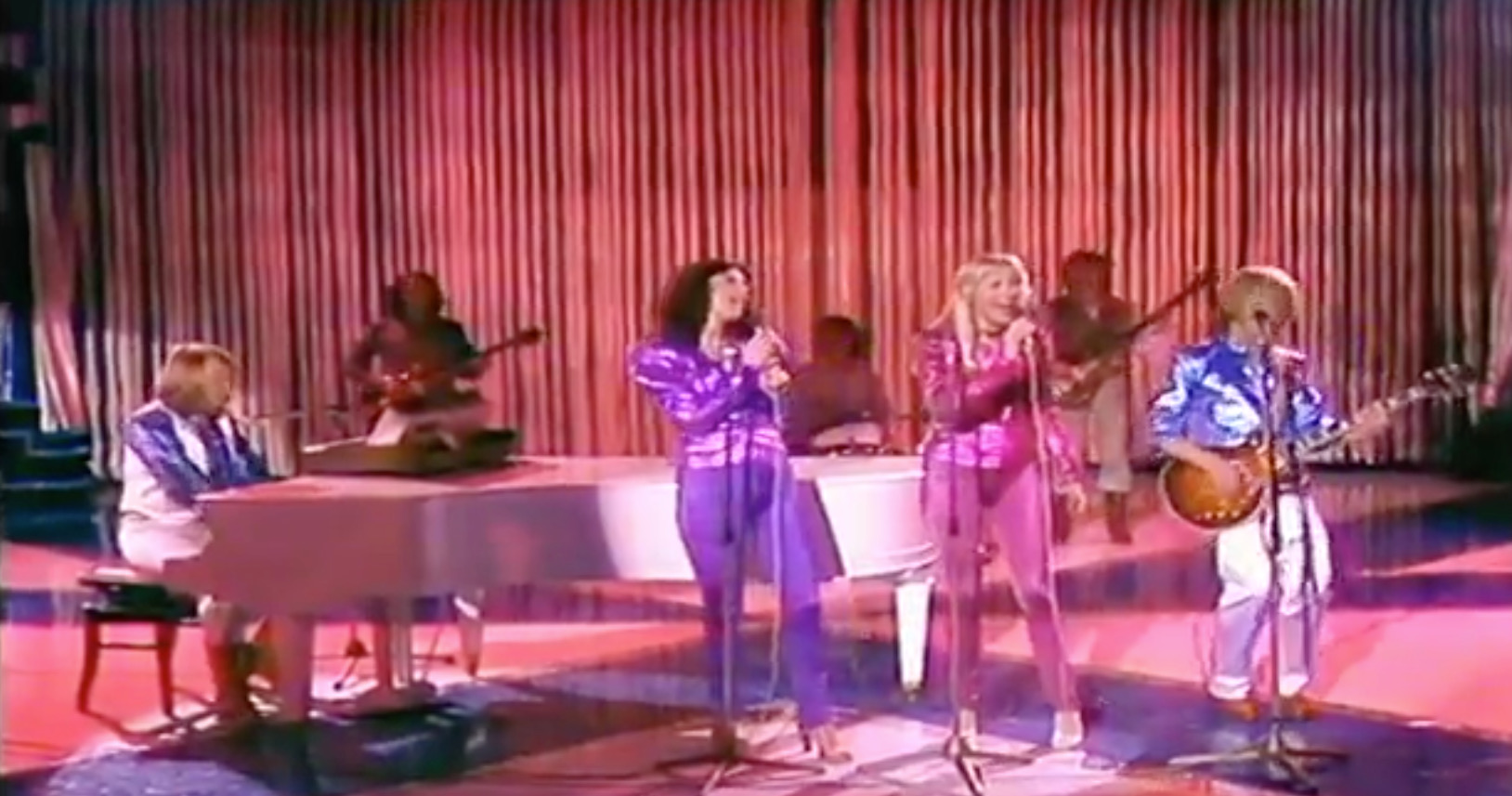 'At the end of our first year, ABBA came to town. Together with the BBC, they made a number of TV programmes:  Snow-time Spectacular & ABBA in Switzerland being two of them.  Lisa and an American boy sang Silent Night in English, while a group of Swiss children sang it in French for the Snowtime Spectactular show. It was shown here in New Zealand. We went to the recording concerts, held in a huge marquee in the village.

'We took advantage of the long school holidays to travel extensively in Europe.

'At the end of our second year at the school, the owners asked all the teachers to write some sort of review of the school. I didn’t bother, but Les, being Les, wrote the equivalent of an NZ ERO report on the school - all the strengths and weaknesses, followed by recommendations for improvements. The owners responded by offering him the Principal’s position - in what is now the sixth most expensive school in the world.  He declined the offer, as we knew that we had to bring Lisa and Gina back to the NZ school system.

'When we returned we bought 20 acres of land in East Tamaki, in Auckland, that no-one else seemed to want, so once again we kept animals - horses and goats. We bought the land for the cost of a house and moved a second-hand house onto it.  The best investment we ever made.

'Les came back to a HOD Science position, became a Senior Master, Deputy Principal, and then Principal.  By the time he retired at 53, he was very thin. A blood test showed that he was anaemic and he was identified as being a coeliac. That was the one test that was never done in Hamilton! Coeliac disease would have been a contributing factor to his illness in 1976/1977 and it certainly contributed to some ill-health in the following years.

'In conclusion, I would like to say that we would never have gone overseas at that stage of our lives, if Les had not become ill. It was a great adventure, and we are both so pleased that we went. We are still in touch with many of the staff and students and hope to go to a school reunion in June next year.'

Turning misfortune into a blessing - 21 September 2021
+ Text Size -
Do NOT follow this link or you will be banned from the site!