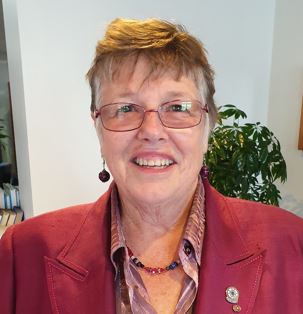 Donna Reed gave us the Viewpoint this evening. She said ...

'I cycled and barged from Dijon to Tournous-Devant, a commune in the Hautes-Pyrénées department in south-western France, a distance of over 700 km. The Musée du Vélo, the bike museum in Tournous, is a must-see for bike enthusiasts. Don't go with someone not interested in cycling because you could drift your way through three hours of the history of cycling. There were three rooms of countless bikes 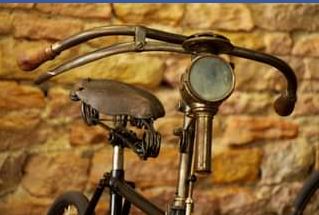 going back to 1820 when wheels were wooden and pedals hadn't been invented. There were some Tour de France memorabilia and outside there were three ancient bikes to try riding, including a penny-farthing.

'We all remember our first biking attempts and our awesome wipeouts.

'I didn't ride until my late teenage years when school friends and I went by tandem to Motunau, half way between Christchurch and Kaikoura. Later, I cycled the 3.4 km from Christchurch railway station to Teachers College every day.

'We have two centuries of two-wheeled history.

'1817 saw the first bicycle. It was a runner without pedals and metal wheels. Later it had four wheels and went along train tracks.

'In the 1850s and 60s the first three-wheeler then the velocipede was designed for a more stable ride. Later crank and pedals were included, but not yet brakes, resulting in many dangerous “headers”. 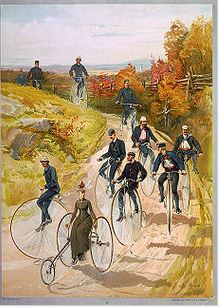 'In 1870 the Penny Farthing bicycle was invented.

'In 1885 the more efficient safety bicycle was invented with two wheels connected and driven by a chain.

'In 1894 Betty Bloomers became popular. Women were no longer limited to tricycles and could ride comfortably in their long skirts.

'In 1896 the Olympics took place. 1896 was a huge year in bicycling history; it marked the first time that competitive cycling appeared in the Olympic Games.

'Then WW1 started. On the morning of 28 June 1914, the 12th Tour de France began in Paris. The riders couldn’t have known that, over 1000 miles away in Bosnia, Franz Ferdinand, had just been assassinated. One week after the race had finished, Germany would declare war on France – World War I had begun. 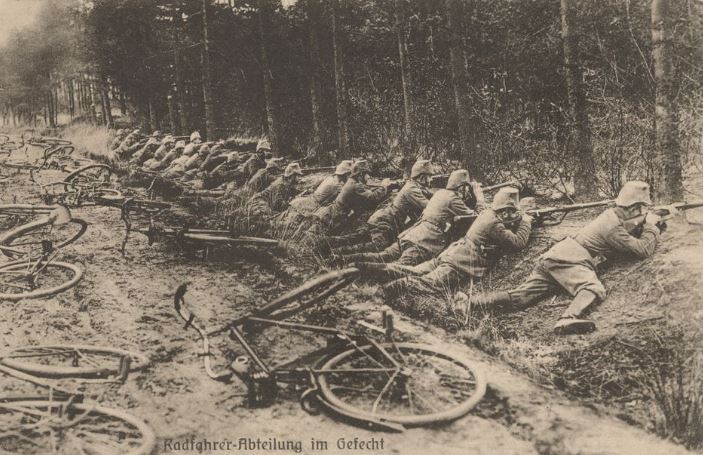 'What the Tour de France riders also couldn’t have known was the prominent role that the bicycle would come to play in the war. In its opening stages of the First World War, armies turned towards the bicycle. The British, Belgians, Germans, French, and Italians all used the bicycle.  In fact, it is thought that Britain’s first fatality of the war was a teenage reconnaissance cyclist scouting for German positions in Belgium. He was killed just days after the British Army arrived in France. The Italians made use of bicycles the most. They were used by a light infantry unit called the Bersaglieri - meaning marksmen. As the war descended into trench warfare, bicycles proved ineffective on the Front Line. British cycling battalions were instead used for reconnaissance and to ferry communications between trenches. The canal systems in both Britain and France were seen as very vulnerable to attack by sabotage and were therefore regularly patrolled by Army cyclists.

'In 1930 a spring fork and fat tires were invented to handle the abuse of teenage boys. This later became the preliminary design for the mountain bike.

' In WW2, the bicycle became a major weapon of conflict. In 1937, Japan used some 50,000 bicycle troops in its invasion of China. Early in World War II, cycle-mounted Japanese soldiers marched through Malaya on their way to capturing Singapore. The bikes provided quiet and flexible transport of thousands of soldiers and saved petroleum. The Finnish, Swedish, Polish, and German armies also made extensive use of bicycles during the war. The Swedish bicycle infantry divisions were equipped with domestically manufactured military bicycles, the most important of which was a one-speed roadster. The US army supplied folding bicycles to paratroopers and messengers. They also dropped bicycles out of planes to their troops behind enemy lines, giving rise to the term “bomber bikes”. Bicycles were also very important to the Viet Cong and the North Vietnamese army, who used them to transport supplies along the Ho Chi Minh trail. However, because they often carried up to 180 kg of rice, these cargo bikes could not be ridden but were pushed instead.

'Today, bicycles are no longer used in anger, unless you count their use by cycle-mounted police to deal with social protests and crime.

'Technology has improved and the Baby Boomers are retiring The new millennium introduced the Electric bike. Some Rotarians admired my bruises a couple of weeks back when I had a few falls off my converted e-bike along the trails of the Mighty Waikato River. I would like to blame the inadequacy of my e-bike as I jolted over a cattle stop but I glanced to admire the calves in the paddock beside me and braked suddenly as the second cattle stop appeared from nowhere. As I began to lean over towards the rising track I fleetingly wondered if the wire fence was electric and, full of grace, I catapulted to the lower solid fence post. The following day we did 56 km from Hamilton gardens to Ngarawhahia. My battery is only 50km. So there were a few tired falls and cycling uphill under my own steam. However, we completed 150 km in 4 days.

'I have now ordered a better e-bike to do Lake Dunstan at Easter. I'll be 70 by then so perhaps I should consider the Solar-powered Bike which includes a solar-powered battery to recharge outside the workplace for the commute home.

'My viewpoint is "Get out on yer bike"'.