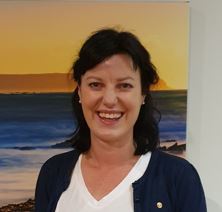 Rachel McKinnon gave us her Viewpoint tonight. She said ...

'My viewpoint is based on the book ‘Atomic Habits’ – by James Clear (has anyone read it)?

'It’s one of the few times in my life I have actually paid attention to mathematics!

'James Clear sets the scene by describing the state of the British cycling team prior to 2003 – their performance was so poor, that top bike manufacturers in Europe refused to sell bikes to the team – they thought it would hurt sales if other professionals saw them using their gear.

'Fast-forward to the 10-year period 2007 – 2017. During that time, British cyclists won 178 world championships, 66 Olympic or Paralympic gold medals, and 5 Tour de France victories.
The reason for their success? A coach by the name of Dave Brailsford and his relentless commitment to a philosophy of ‘searching for small margins of improvement in everything you do’.

'Brailsford and his team went above and beyond to make small improvements in overlooked and unexpected areas.

'These small gains had a cumulative effect. Much like compound interest! 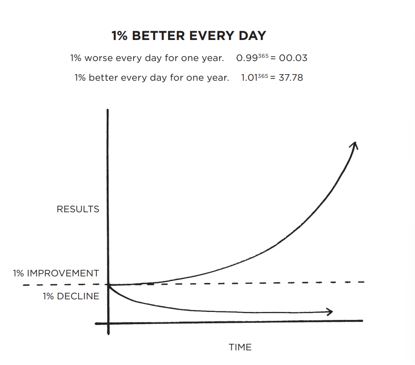 'How often do we think – big success, requires big action? Improving by 1% isn’t particularly notable, even noticeable, but like compound interest – the effects of your habits multiply as you repeat them. Sometimes we dismiss the small changes because they don’t seem to matter very much in the moment. If you go to the gym 3 days in a row, you could still be out of shape. If you study French for an hour tonight, you still haven’t learnt the language. A bit like a New Year’s resolution – we make a few changes, but the results never seem to come quickly so we slip back into our previous routines.

'The impact created by a change in your habits is like shifting the route of an airplane by just a few degrees. If a pilot flying from LA to New York City adjusts the heading by just 3.5 degrees south – you’ll end up at a completely different destination (Washington in fact – James Clear outlines the calculations for this). A very small shift in direction can lead to a very meaningful change in destination.

'Making a 1% choice may seem insignificant at the time – but it’s these moments that cumulate during a lifetime and determine the difference between who you are, and who you could be. 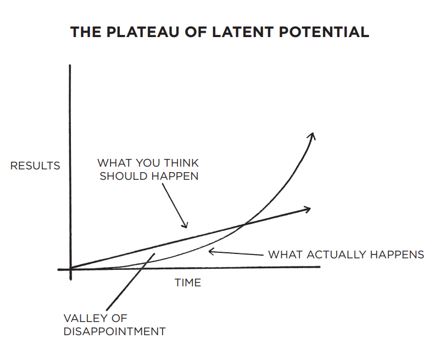 'We often expect progress to happen in a linear fashion – James Clear outlines that the results of our efforts are often delayed. He acknowledges that we often feel discouraged after putting in weeks/months of work without experiencing any results. He refers to this as ‘The Valley of Disappointment’ – I know it well and I’m sure this resonates with many of you too.

'How often do we see people as having a ‘breakthrough moment’, or ‘overnight success’ – whereas in fact, the hard yards have been completed over time/behind the scenes.