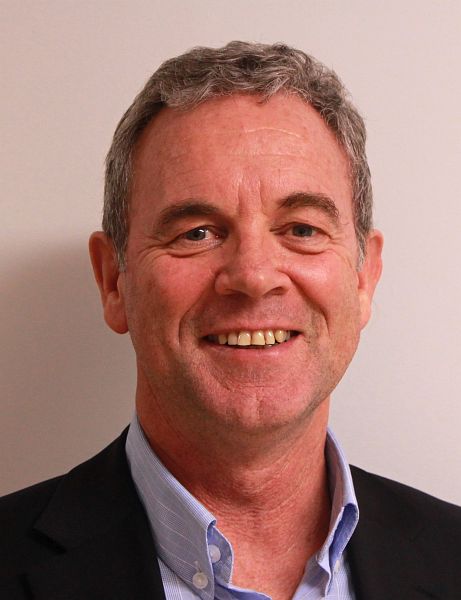 Tonight, John O'Connell revealed "The Person Behind the Badge" and this is what he told us:

'I was born in the mainland, Timaru, on 29 May 1957 and was brought up in Timaru, Wellington and Wanganui. Before it had an f and h added to it. None of my Maori friends pronounced it with an ‘F’ – always a ‘Wha’.

'I am the eldest son of 5 to Joan and Niall O’Connell.

'On my paternal side, my father Niall, was the youngest of 11 children – his father, Edward, had married twice and Dad was in the 2nd part of the family. Dad’s mother, Joan, died when he was 6 yrs old and Dad became an orphan at age of 13 when his father was killed in the Hyde train crash in 1943 aged 66. He was then raised by 2 older sisters in Dunedin. At the time of the accident, the family was living in Hyde, Central Otago, having moved back there from the farm at Frankton, Queenstown – the site of the Queenstown airport & the homestead and stables are still there - after losing it due to The Depression.

'We can trace the O’Connell side back to ancient times in County Kerry in Ireland, and are descendants of The Liberator, Daniel O’Connell.

'On my maternal side, my mother, Joan, was a single child to Joseph and Agatha Norton – Agatha was a Vincent (both surnames same as 2 very famous motorcycle brands). They come from British and North Italian family backgrounds.

'I have been married to Cherryl since May 1980 and we have 3 sons – Fraser, Edward and Regan. Fraser is married to Frances and they have a 3 yo daughter (Holly) and a 7 week old son (Levy). Fraser and Regan live here in Porirua and Edward is arriving back from Sydney imminently.

'Most of my formulative years were in Wanganui, when Dad was a wool manager with Dalgety’s. I was educated by the Marists – nuns at Primary, Marist Brothers for intermediate years, and Marist Fathers at St Augustine’s College (now a co-ed renamed Cullinane College).

'I am a member of the College of un-molested altar boys and boy scouts.

'During the school holidays I worked on farms dagging and crutching sheep, poultry farms and in the Woolstores where I was exposed to life beyond the catholic shackles. It was where I also developed my varied musical tastes having been introduced to the dark side of Rolling Stones, the flamboyant Roxy Music and the amazing instrumental Darryl Way’s ‘Wolf’. My first albums - Best of the Beatles and Mouth & McNeil, were given to me by my mother – I still have them.

'I participated in cross country running (was 1500 metre champion), tennis, basketball, rugby (2nd 15) and rowing – both as an intermediate 8’s rower and as senior cox attending 2 Maadi Cup regattas.

'Also played basketball for the Dalgety Allstars and half-back in the Dalgety rugby team against local farmer teams.

'My dream job at the time was being a Stock Agent but no vacancies at time of leaving college. I had also wanted to become a pilot but an eye injury at age 8 meant I could not meet the entry criteria – I am blind in my right eye.

'I started work at AMP in Wellington in Jan 1976 as a clerk doing quarterly mortgage interest calculations in the Home Purchase division of AMP Investments. Went on to do stints in Group Insurance and Death Claims before resigning to move to Napier in late-1980 to start my sales career as an AMP Collector Agent before moving into sales management roles. We moved because Cherryl, had got a dental nurse posting to a school at Puketapu, not far out of Napier.

'While in Wellington I played rugby for Marist St Pats Under 19’ and Under 21’s when we won the Division – also J3 grade. I retired after ACL injury.

'In Napier we rented an apartment at the top of Shakespeare Road and then built our first house in Tamatea. Our 3 sons were all born in Napier.

'I resigned from my manager role at AMP in 1983 to be the Branch Manager for Countrywide Building Society eventually becoming the Area Manager after it became Countrywide Bank. It was in 1985 that I was approached by Rodney Wimsett, a partner of Ernst Young, to join the Rotary Club of Napier – starting my enduring Rotary journey. The club met at lunchtime and was a “singing” club – at least 2 songs were usually sung at every meeting – God save the queen and the Sunshine Song before the sergeant’s session. I was quickly appointed as the Club Treasurer – I am forever thankful for this appointment as it opened my eyes up to the internationality of what Rotary is all about and is the main reason I am still here.

'In 1987 I rejoined AMP as associate area manager before taking on the Napier Sales Unit after a restructure. I had a magnificent office overlooking Marine Parade and the foreshore.

'In 1990 the family moved to Porirua after I was appointed Business Manager for the Wellington Region based over in Lower Hutt.

'I then joined Plimmerton Rotary.

'The Business Mgr role was a job that I really enjoyed, and after adding the South Island to my area, the whole Sales Division was restructured and I was offered a 2-I-C sales manager role in Palmerston North or redundancy with 6 weeks notice - which I took. I remember vividly turning off the office lights at Wellington Harbour Capital Agency and walking out with a very large cheque in my jacket pocket.

'A week later I started as the Investment Client Services Manager with Tower Retirement Investments Ltd – this was another role I particularly enjoyed as it introduced more to corporate IT operating systems and testing environments. Major projects I lead were to eliminate paper records and have everything digitised, and embedding the lastest bleeding edge workflow technology in to our call centre operation processes.

'But again, another redundancy in 2000 after the Tower Group Manager decided to reduce his ‘fleet of ships’ from 7 down to 3.

'While enjoying probably one of the best Wellington summers I can recall, I was invited to buy an insurance business off an AMP agent who was retiring early due to ill health. To me this was a god-send opportunity to be my own boss again. This business had income streams from life and general insurance, and a growing investment portfolio. Due to my past lending background I added mortgage broking to the business for a few years before new rules made that side of the business unenjoyable.

'After a few years I amalgamated my business with another AMP team, and eventually we went on to be an award-winning business for many years as Coastal Financial Planning before moving away from the AMP network briefly to join with AdviceFirst. At the time AdviceFirst was 51% owned by AXA NZ. Not long after, AMP bought out AXA. I stayed on with AdviceFirst as a minority shareholder before retiring in February 2018.

'The plan was then to travel overseas including a 3 month stint doing volunteer work on the Mercy Ship off West-Africa. But that year Cherryl was diagnosed with breast cancer and so our lives forever changed. So, the only volunteer work I got to do was the Rotary trip to Taveuni Island in Fiji to do work at the local hospital and nursing quarters along with Ron and Jenny Lucas, John Gillon, and two great guys from Kapiti Clubs. A great trip!

'As our travel plans were now on hold, and with both of us at home following Cherryl’s surgery, chemo and radiation treatment, she suggested that I should look around for a part-time job. Almost at the same time I was asked out of the blue to apply for 4 roles in financial services. I turned down 3 of those roles due to extensive travel and/or long hours, or because there were staff to manage.

'I accepted the Business Insurance Specialist role at BNZ starting 1st November 2018 and finishing there exactly 4 years later on 30 September this year when the insurance operation was sold to Partners Life - my current employer. I really enjoyed my time at BNZ working with the business, commercial, property and agri partners looking after the Wellington Region covering Taranaki, Manawatu, Hawkes Bay, Wairarapa and Wellington. In my role at Partners Life, I have those same BNZ partners as my customers and areas to look after – same job, same pay, different business badge.

'Rotary has played a major part in my family’s life – after being your Club President in 2007-2008, I was invited by the then DG, Pat Waite, to join the District 9940 International Youth Exchange committee eventually becoming the Chairperson for a 5 year stint. To me, the International Youth Exchange is Rotary’s jewel in the crown and long may it continue in a post-covid19 world.

'Cherryl and I have hosted 6 students from USA, France, Denmark, Brazil and Switzerland. We have maintained contact with them and have hosted their families or been hosted by theirs. Cherryl and I had the privilege to lead 2 NZ Exchange Student contingents to UK and to South America. Great kids who were fantastic ambassadors for Rotary New Zealand. Great and fond memories associated with those 2 trips.

'Outside of work and Rotary, my interests are vinyl record collecting, boat fishing out of Mana, and re-learning guitar playing. With pending 2nd retirement, I am keen to grow a vegie garden at our newly built home.'