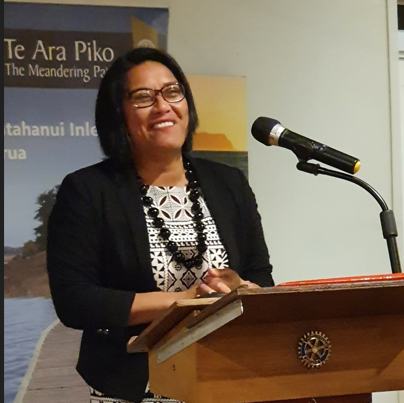 Barbara Edmonds is the electorate MP for Mana, taking over the seat from Kris Fa’afoi, who moved onto the Labour List at the 2020 election. She is a first term MP but had been around the Beehive for three years before that, as Tax advisor to National, on secondment from IRD.

Currently she is associate party whip and chair of the Finance and Expenditure Select Committee.

Barbara arrived at the last minute, having been caught up in the Dr Sharma debacle and the resignation of Speaker Trevor Mallard. This seems typical of an MPs life, rushing from pillar to post, from one crisis to the next.

Barbara described her commitments and movements in the current week, an exhausting schedule with little leeway to have proper meals or spend much time with her family.

Barbara’s family background is interesting. She is the daughter of Samoan immigrants who settled in Auckland. Her father pushed the benefits of education and trained as a social worker in later life. Barbara took a law degree at university, finding time to have eight children along the way. She happily concedes that Labour’s policies over the years have helped her family in various ways, and led to her becoming a Labour MP. She paid tribute to her husband, who is clearly a saint.

Two burning questions remain: how does Barbara fit it all in, and who in their right mind would want to be an MP?