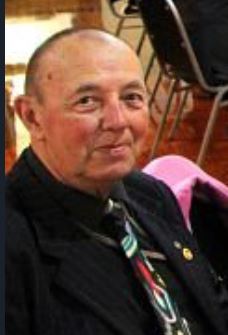 Pieter Johan Sinké told us his story this evening.

I was six when I came to New Zealand and could only speak Dutch. I was bullied by the locals at Khandallah School as I could not speak English and was Catholic. I was then shifted to a Convent School at about the time that my Dutch Dad died and we were left stranded in New Zealand. I then lived with my Kiwi Mum in the home of my Uncle and Aunt who were very, very strict. I could not bring friends home and it was a bit of a tough time.

I joined a Cub Group across the road and remained an Adult Scout Leader for 15 years. My first wife was also a Cub leader. I was with the Southern Cross Group Newtown, and then started Groups in Normadale, Maungaraki, and Belmont. I learned good skills with Scouts.

But my folks sent me to St Pats Silverstream as a boarder. It was tough, and disciplined but they were good times.

I worked three jobs concurrently to get a house deposit; commercial cleaning at Caltex in the early mornings, Petone Piecart in the evenings, and my day job was with Internal Affairs Explosives Division. They took me as a cadet and sponsored me to Polytech and University.  I ended up as an Industrial Chemist.

I wanted to build a house and get married.  So I got ambitious, and applied for a job as Production Planning Manager at the Austin, Wolseley  car plant with twice the money and a company Car.  Wow! I thought it was Christmas.

I built a three-storey house in Maungaraki but on the day of the Wahine storm, the Car Plant was flooded up to the waist, and more than 100 cars were ruined. I went home to find a huge slip all around my house.  My employer, then NZMC (Motorcorp) lent me a front-end loader and told me to take two weeks off work to sort it out. That was fun.

About then, my wonderful son, Chris arrived and his Mum stayed home. He lives in Whitby now and builds spec homes.

Austin and Dominion Motors merged to form NZMC and then also absorbed New Zealand British Leyland so Morris / Rover / Triumph / Land Rover / Jaguar and Rolls Royce all needed a Product Manager. I put my hand up and what followed were regular visits to car factories, two in Auckland and one in Nelson.

Then along came my other wonderful son, Tony, and he soon started to want motorbikes instead of rattles really early - and a pony. He is now a Technology executive in Sydney.

I found it hard to believe the money we were paying to an ad agency for printing colour car brochures for Mini !000s, Allegros, Maxis, etc., so I resigned and started my own printing business, helped by my first wife, and started printing car brochures while building the three-storey Old Rowley homestead in Moonshine Road.

I shut all that down, and sold the place as my first wife wanted a divorce - she could not cope with my work rate. So, at that point, I was unemployed.

A friend of mine recommended me to Commodore Computers New Zealand on the North Shore. They wanted me to introduce the IBM Compatible Commodore PC to Government and appointed me Regional Manager, Wellington based. I leased an office in Lower Hutt, and Insisted that they give me a qualified computer serviceman (as the Government would never send a repair person based in the Hutt Valley to Auckland).

At this point, my Linda and her husband and lovely family arrived here from Auckland. Linda often came in to act as our receptionist Okay, okay - don’t get ahead of me. I know what you are thinking. What happened was that Linda’s husband did a runner, we started dating, and we built a three-storey home on the hills of Haywards, on a 50 acre forestry/farm block actually just in Upper Hutt City.

Linda’s son Roy was a member of this club briefly a few years ago, and he printed some of our Rollups.

Peter Lillico recruited me and his sons and my two regularly put their motorbikes and mine on my large trailer and we would go away for a day or two off road. Now I have quad bikes. All great fun and adventurous - cannot tell you how many as Linda is here.

I am not good with dates, but about this time, Imagineering Pty Ltd, Australian based with branches in NZ, Taiwan, and Singapore, tapped me on the shoulder and asked me to manage their Wellington operation in the CBD. My business card said Regional Manager. My office was in a penthouse near Manners Street with an adjoining flat. They said I could have any car I wanted, so they bought me an Audi Quattro and gave me a credit card. Then followed many trips around the country, Australia and the USA with a focus on many Las Vegas week-long Comdex computer shows. While there, I even did some revolver and machine gun target shooting, Was this Heaven?

At the same time, I also bought from the Police College a BMW dressed as their cop bike and I used to jump on that with my white BMW helmet and black leather jacket, and rear aerial and come up behind a speeding car and toot. Oh what fun!

Melco / Mitsubishi Electric, Japan / Black Diamond in Lower Hutt had a computer division that sold to the dealer/reseller channel and had just appointed a very, very young-looking young man as General Manager. He was clever but inexperienced and nobody in the dealer trade would take him seriously. He looked like a school boy. So, they tapped me on the shoulder and appointed me Special Projects Manger mainly to take him around New Zealand and introduce him to the potential customer base. That went well and was followed by trips to Japan, Australia, Club Med Noumea for a product launch with 40 dealers and wives. We even went on Big Game fishing charters in the Bay of Islands.  These were great times.

One of the products Mitsubishi sold was Acer Computers. Acer approached me and asked me to be their Southern Regional Manager and I could work from home. They wanted to get their gear into Government. The money was okay and I secured a huge deal with a University that IBM had been working on for a year.

I only stayed for nine months with Acer. One day I was having a late lunch in McDonalds, Petone when a guy called Dean sat down next to me, said he was from IBM and asked if I would for them. They doubled my Acer salary, then offered me that again in commissions, and also offered free medicals, free parking, free insurance, and a car allowance.  This had to be Heaven this time. My Office was in the Hotel Intercontinental, Grey Street.

I did okay there. I got a hospital pass with the account for the Police but I overachieved budget and was awarded two $800 bottles of Grange Hermitage wine. Then more success, with many visits to Australia after which I way exceeded budget and Linda and I were awarded an awesome trip away for a week to IBM Beijing, China for morning get togethers with all expenses paid touring in the afternoons.  Wow.

When I got back, I was told that the New Zealand Manager, Dean, had been made redundant and I was now to report to Alison in Sydney and I was to fly to meet her there the next Monday. She asked what sales figures I was projecting. I said about 1.5 million dollars and she said “it’s not enough”. Huh!  My phone rang at that moment in her office and it was a guy from Hutt I did not know. He asked if he could hire my bulldozer for a year at $45 an hour and he would do all maintenance. I said yes. I thought I could make a go of that as a business, hiring gear, tools, welders, log splitters {which I made at home} etc,, so I resigned from IBM the next week.

I registered a company called Mates Rates Equipment Ltd and that’s still going. However, I moved the focus from earthmoving gear to computer gear over time. I’ve done some machinery work for some Rotarians, Bob, Ian, and many of you I still work with today supplying computers, printers, modems, cameras and expert assistance as needed. I am lucky enough to have 1000mbps fibre internet out in the wop wops and can logon to clients computers and rectify problems quickly. So, keep those enquiries coming please. I have several industrial / commercial clients today. I do website creation as well.

With this club, I have been Director of fundraising and community projects twice. I also organized school Audio Systems for several schools, and worked with a Rotary team to build exercise playgrounds for the community. I’ve also managed two off-road car trips which were well patronized and earned good money for Wellington Free Ambulance and the Life Flight Trust. And everyone had a lot of fun too.

I’ve always been very active, with good health despite high blood pressure but seven years ago I had a total surprise heart attack followed by triple bypass heart surgery and a month in hospital.  Fortunately, I’m as happy as Larry now.

I take great pride in two of my older grandchildren, Rhys who was our exchange student to France a while back (and he did a presentation here) and Myah who successfully attended the RYLA course last year, and at 21 just been promoted to Manager of the Hutt Vodafone shop. And, of course there is Linda who many of you know. She is right up there too. We also recently hosted Cristobal, the soccer mad lad on exchange with our club from Chile. A very rewarding experience. We should host more.