It is well known that bees are useful insects. They pollinate flowers, make honey, improve the environment, and are reluctant to sting. Wasps on the other hand serve no useful purpose whatsoever and are predisposed towards stinging anything and everything. 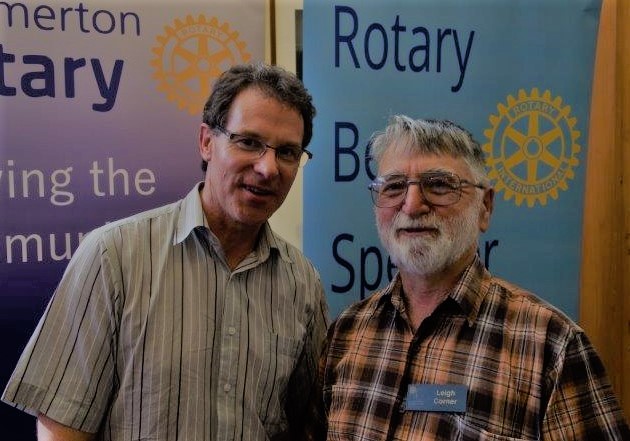 Speaking at Plimmerton Rotary on 29 November, Dr Eric Edwards, (seen here with Rotarian Leigh Corner) Biosecurity Director at the Department of Conservation (DOC), spoke about recent developments in the control of what is a rapidly growing wasp population, particularly in areas such as Fiordland and Nelson/Marlborough, or wherever there are large quantities of honeydew. “Honeydew is a sticky liquid, rich in sugar, which is secreted by insects and is usually found on the bark of some species of trees, such as willows and beech trees. It is most prevalent in the months of February and March.”

In recent times DOC had developed a wasp bait called Vespex. “We use this bait to attract worker wasps from wasp nests. Wasps are very social insects, with a tendency to share what they have with all other wasps in the nest including the queen wasp. By infecting some worker wasps with Vespex we have found that these wasps will infect all of the other worker wasps which in turn destroys the nest. Once the queen wasp is dead, the whole nest dies.”

The best time to lay Vespex was from late January to late April. It needed to be done in fine weather to be most effective.

In some regions DOC had been successful in eradicating wasps. “First we need to (carefully!) find out where the wasps are, and then lay the bait in that location. We lay it in a grid pattern, about 5 metres apart, across the infected area.”

Vespex does not harm humans or birds.

DOC’s efforts to eradicate wasps were critically important to NZ’s bush clad areas, large swathes of which had already been destroyed by the ravages of a growing wasp population. “We estimate that the detrimental effect of wasps is costing our bee-keeping industry alone about $130 million a year in lost production. We must redouble our efforts to eradicate these pests.”

To provide information to the public about Vespex, DOC had created a separate section of their website. Dr Edwards urged his audience to visit this site.

War on Wasps
+ Text Size -
Do NOT follow this link or you will be banned from the site! Original generation time 1.7003 seconds.