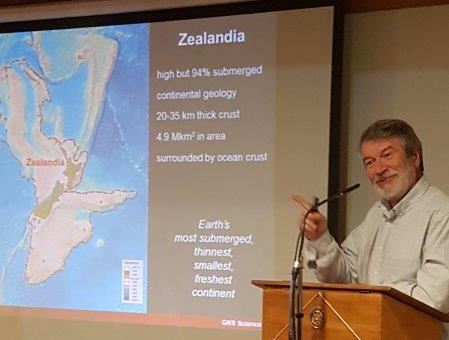 The earth’s crust is continually moving upwards, downwards and sideways. Most of these movements occur under the sea and are small in magnitude. It is part of the geologist’s role to study and to better understand these movements. 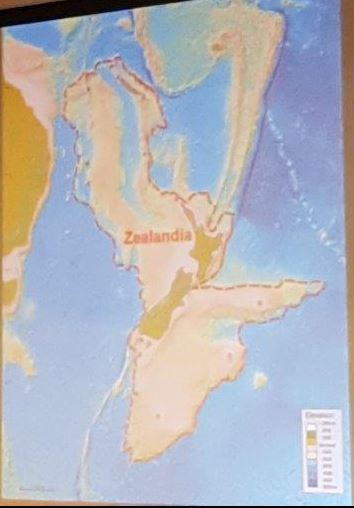 Speaking at Plimmerton Rotary on 9th May, Dr Hamish Campbell of GNS Science gave his audience an entertaining glimpse into what lies at the bottom of the sea. He used many high-quality maps and charts to illustrate his presentation. One chart depicted the submerged continent of Zealandia which lies beneath New Zealand and is larger in area than Australia. “So whenever we meet up with our colleagues across the Tasman, we remind them that our continent is bigger than theirs.”

Another chart showed the Pacific plate and the Australian plate, together with the fault line in between which started near Antarctica, followed the Southern Alps, crossed Cook Strait, skirted Wellington, and followed the East Coast of the North Island. At various points along this fault line, one of these plates was being slowly pushed under or over the other plate. Dr Campbell explained this was because the Australian plate was slowly moving northwards, while the Pacific Plate was slowly moving westwards.

In 2015 Dr Campbell had been part of an international team of scientists which took part in a VESPA (Volcanic Exploration of South Pacific Arcs) expedition in the South Pacific Ocean. Financed by the French Government, the expedition’s main task was to dredge the ocean floor and retrieve rock samples. “The dredge was not exactly state of the art but it worked well enough. It consisted of a large and heavy metal bucket with metal ‘teeth’ around the edge, and the idea was to lower this to the ocean floor on a heavy duty steel cable and slowly drag it along. After a time we would lift it to the surface so that we could retrieve the rock samples for future analysis.”

Dr Campbell noted that without the support of the French Government, expeditions like this one simply couldn’t happen. “The French take the rather refreshing view that it is worth spending money on exploration for exploration’s sake.”

The rock samples retrieved from the ocean floor were in the process of being carefully analysed, a process that could take some years. “Many will contain fossils that will help us understand some of the history of our region.”

To a light-hearted suggestion that many members of Rotary Clubs could perhaps be described as old fossils, Dr Campbell was quick to reassure members that this was not the case. “You can only become a fossil after you’re dead.”

The Crusty Geologist
+ Text Size -
Do NOT follow this link or you will be banned from the site! Original generation time 2.6078 seconds.