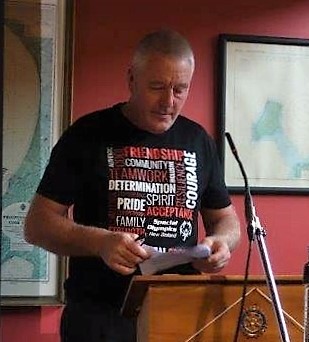 Allan Smith, chair of the Mana club, attended the meeting at Plimmerton on 4 October to accept the cheque for $300 that the club had raised for the Special Olympics. He brought with him one of Mana Club's shining stars, athlete Gary Allbright, who is currently holding down two jobs.

Gary has been selected out of a number of people from around New Zealand to begin training as an ambassador for Special Olympics and to go on to become a Gobal Messenger like Vicki Brown who came and spoke to us recently with Kathy, CEO of Special Olympics, New Zealand. Gary is the first athlete to be selected from Mana and the club has been told that the calibre of those who applied this time is the highest they have had to choose from in the past. Not only has Gary been selected for this role but he, along with three others from the Mana Club, have been selected as finalists for the Porirua Sports Awards. 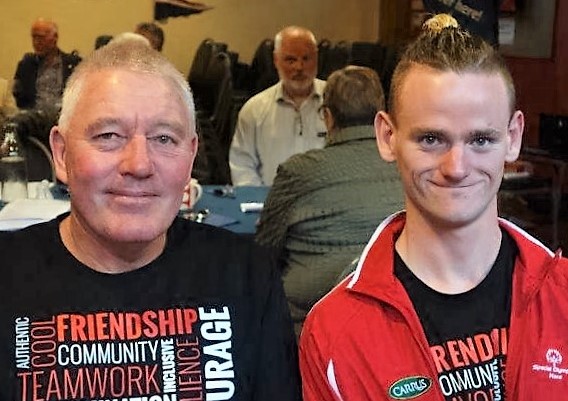 The Mana Club is the fastest growing club in New Zealand and Allan believes that there is plenty of room for more members. In the last two years alone, the club has grown from 12 athletes to 70 and from one sport to four namely ten pin bowling, swimming, football and basketball with a number of athletes doing two or three sports. They are hoping to add botchy and athletics in the near future. Allan said that not all athletes will compete in competitions but the skills they have learnt are quite amazing. Athletes, like Gary, have improved so much that they have taken up to seven seconds off their personal best times in swimming.  The club is very proud of what they do and achieve.

The support from the community is the difference between giving these athletes a chance to grow and learn or to sit at home and do nothing.

In thanking Plimmerton Rotarians, Allan invited members to attend a training to see for themselves the good that the money will be put to in changing so many lives. On Saturday 15 October, commencing at 9.30 am, there will be a competition in the main gym at Te Rauparaha and everyone will be welcome.

Explosion of Mana Special Olympics Club
+ Text Size -
Do NOT follow this link or you will be banned from the site! Original generation time 1.8994 seconds. Cache Loaded in: 0.0278 seconds.