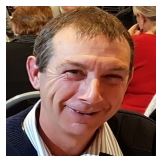 Keith Harrison gave us his Viewpoint this evening. He said,

'For the last couple of months my work life and the news has been dominated by Covid-19 and for the last four weeks, I have been stuck in my Covid bubble. Unsurprisingly, all I have to talk about at the moment is this all-consuming global event that is affecting every single person on the planet to some degree.

'The more I am involved in this event the more it becomes clear how much is unclear. We know quite a lot about this virus, at least its DNA, but we can’t say for sure what it does, how it does it, why some people get mild symptoms and some severe – regardless of age. We don’t know how long it will hang around for and whether we will be able to develop a vaccine. Science has more questions than answers and that creates a lot of uncertainty. In times of uncertainty and crisis people need strong leadership. Cometh the hour, cometh the man (or woman).

'At times of crisis, people need leaders who are decisive and committed to their decisions. Their plans may be flawed or imperfect but in a crisis, there is no such thing as a perfect plan.

'Covid-19 is not just a health crisis, it is an economic crisis. Never before has one single event shut down so much of the world’s trade, commerce, and financial systems. Whilst there have been many financial crises over the years, this event is unprecedented.

'People all around the globe are scared for their jobs, their homes, and their livelihoods. For billions of people, life has never been so uncertain. On top of this, there is the fear that they will become infected, particularly those who are health compromised. And recent findings suggest that even young people, previously seemingly unaffected may be getting strokes and inflammation caused by Covid-19.

'People want to be told what to do to overcome the uncertainty of the times. They need simple messages, repeated often, consistently, and with empathy. They also need transparency and honesty. They need something to hold onto. They need leaders who are empathic but resolute, who are seen to be acting in the interests of the nation and looking forward. Just as important is the support people need to get through the crisis, particularly financial. And New Zealand, with a fiscal surplus, is better placed than many debt-laden countries to provide that support.

'Around the world, many countries have resorted to the blunt instrument of shutting the economy and telling people to stay home. This measure is designed to stop the spread of the disease and the health system becoming overwhelmed. Some countries have been able to do this better than others. The timing of the decision to lock down the state has had an important bearing on the result.

'Countries that moved early and quickly have done better than those that did not. Making the decision to move early was a bold one.

'Some countries have taken a less restrictive approach based on personal responsibility, such as Sweden, where their cases and fatalities exceed those of other Scandinavian countries that have been more restrictive, like Denmark and Norway. At this stage, we don’t know whether this will have a net negative approach but people in Sweden are starting to get more vocal with their concerns. Public clamour may direct government response.

'New Zealand is one of many counties where leaders have stepped up, made a bold decision, committed to it, and supported their decision with support for the vulnerable, and so far New Zealand’s management of the crisis has been very effective.

'Of course, NZ is fortunate that it can shut the doors and isolate from the outside world and up to now the strategy appears to be working, although we don’t know how long the rest of the world is going to take to get on top of Covid-19 and we can’t say for sure that we have; there are a lot of unknowns with this virus.

'I think one of the other key aspects of the approach taken in New Zealand is that it is apolitical. It doesn’t matter what your political interests are, because there is no political capital being sought. Everyone can support the government’s stance. Even so, the sitting government has probably done enough to carry the next election as a result of the way it has managed Covid-19 so far.

'I don’t need to dwell too much on the leadership – or lack of it in the USA, in Brazil and in many other countries. Even before Covid-19, there were many states with weak leaders and fragile economies. Leadership in these countries has been bewildering, confusing, xenophobic, confronting, blaming, partisan, factional, and deeply political, in fact, the complete antithesis of New Zealand’s approach. This is the difference between crisis leadership and leadership in crisis.

'As a result, these countries are divided, the people are scared, confused and they are taking to the streets. These are also countries that don’t have a social welfare safety net and where business imperatives are taking precedence over social cohesion and public health. Whilst a lot of these countries that lost control of Covid-19 – Italy, Spain, and the USA particularly, are seeing a possible tail off in their cases, there is no indication that the virus is under control or that it will be for some time. Who knows what impact this will have on these countries’ economic and political stability?

'This viral outbreak may have a long way to run yet. Whether NZ has taken the right path may take a while to determine but I certainly feel more comfortable in my bubble in Whitby than I would be anywhere else right now!

Crisis leadership and leadership in crisis - 28 April 2020
+ Text Size -
Do NOT follow this link or you will be banned from the site! Original generation time 1.9221 seconds.