'Those who haven't been in close contact with us will be wondering what has been happening since our earlier fundraisers when you all supported the polar fleece and rebuild projects in one way or another - making food, donating goods, money, books, expertise, etc etc. That was so much appreciated.

'Vicki has recently been to Nepal and reported that the library is going well and the people are in good spirits, though there has been a lot of chesty sickness amongst the children - largely as a result of the lack of housing. 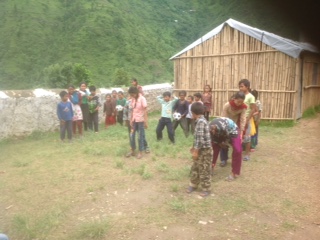 'The project to rebuild the bamboo classroom has been somewhat drawn out since we originally mooted it eighteen months ago. Collapsed hips interfered but I have two good strong legs now so I am ready for running up those steep Nepali hills between the bottom and top part of the village in Ghusel.

'We fly out on 23 October, armed with school equipment, books, vegetable seeds, and some woollies for the children aged 0 to 2 years who have been born since we fundraised for warm clothes. The Nepali government haven't reached this village to rebuild houses so they face yet another cold winter under plastic and corrugated iron.

'I want to thank you all for the hard work you put into supporting the previous fundraisers and we will be sending photos and updates from Nepal on the building progress.

'This fundraiser is not going to be labour intensive. We just want people to come and have a good time, dancing to the band "The Tarps" who were so popular last time as was Rochelle - a last hoorah before we head off!' 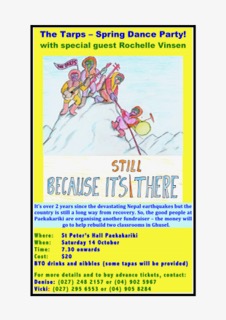 "The Tarps" will be playing at St Peter's Hall, Paekakariki, to celebrate Spring and for our final fundraiser for Nepal to replace two demolished classrooms.
- seventies music - all the classics!
Special guest Rochelle Vinson will be accompanying them for a set as well.
Make up a party, bring drinks and nibbles and join us on Saturday 14 October from 7.30 p.m. onwards at St Peter's Hall, Paekakariki. (Some platters of tapas will be provided)
Cost : $20
Any contributions of items towards a raffle would be gratefully received.

Celebrating Spring for Nepal
+ Text Size -
Do NOT follow this link or you will be banned from the site! Original generation time 3.3845 seconds. Cache Loaded in: 0.0006 seconds.