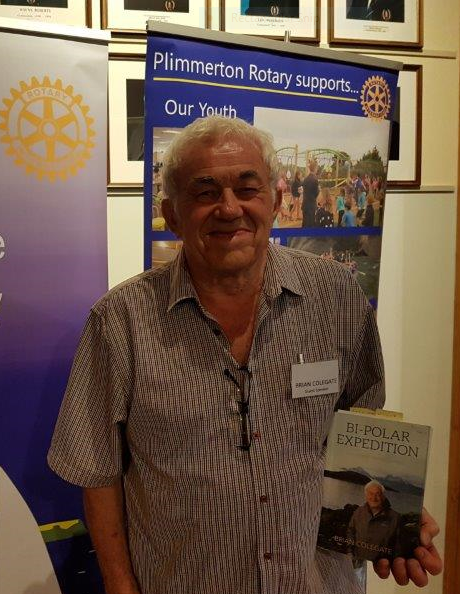 This intriguing phrase is the title of a new book from local author Brian Colgate, a life time sufferer from bi-polar disorder. In a courageous and frank presentation at Plimmerton Rotary on 2nd May, Mr Colgate explained the condition and its effect on him and his family.

A past Kapiti District Councillor, Mr Colgate had recently become widowed when his wife Ann had passed away. “We were married for 55 years. She was my rock. She was small of stature but a tower of strength.”

Mr Colgate explained that bi-polar disorder had previously been known as manic depression. It was a neurological condition that caused the person to suffer extreme mood swings ranging from deep depression to high elation. Each period of depression could last for as long as 3 or 4 months. In Mr Colgate’s case the condition had meant four separate stays in hospital during which a number of different treatments had been tried with varying results.

“At one stage I became so desperate that I asked to be treated by ECT (electro convulsive therapy), which is done under general anaesthetic. The hospital wasn’t at all happy about it but I persevered and they eventually agreed. With ECT, electric currents are passed through your brain, and this often leads to an improvement in brain chemistry. Fortunately the results were pretty positive in my case.”

Statistics showed that 47% of people experienced mental illness or addiction at some point in their lives. “Depression is the second largest cause of disability among New Zealanders. At any one time, around 16% of our population is suffering from a mental disorder.”

Often, humour could help someone who was a bi-polar sufferer. “You never know when a light-hearted comment might save a life. A local bi-polar sufferer recently took his own life. He was a high achiever, very successful in his profession, but he tended to worry about the most insignificant details. At the end of the day I guess he was just sick of living in a haze.”

There was no definitive explanation as to the cause of bi-polar disorder. “It could be genetic, or it could be caused by the general environment. No-one knows for sure.”

The message Mr Colgate wanted to spread far and wide was: “ It really is time for all of us to talk about mental health and well-being.”

Bi-Polar Expedition
+ Text Size -
Do NOT follow this link or you will be banned from the site! Original generation time 1.7459 seconds. Cache Loaded in: 0.0347 seconds.