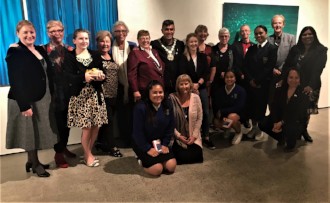 On Wednesday 17 October, Pataka was the venue for one of the most amazing Rotary events this Rotarian has attended: A celebration of 125 Years of Women’s Suffrage in New Zealand. The managed to secure four wonderful speakers and to provide a contribution from the local whizz-girls, Le Art.

An enticing and tasty array of food awaited guests as they arrived. There was time to chat and meet new friends. 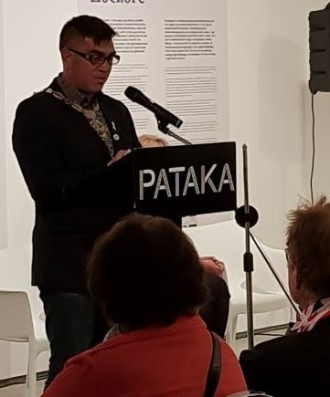 Formalities began with a karakia from Ngati Toa’s Rihia Kenny, followed by Mayor Mike Tana who, as Master of Ceremonies, welcomed everyone and explained the purpose of the evening – a celebration of women of Porirua and all Aotearoa. 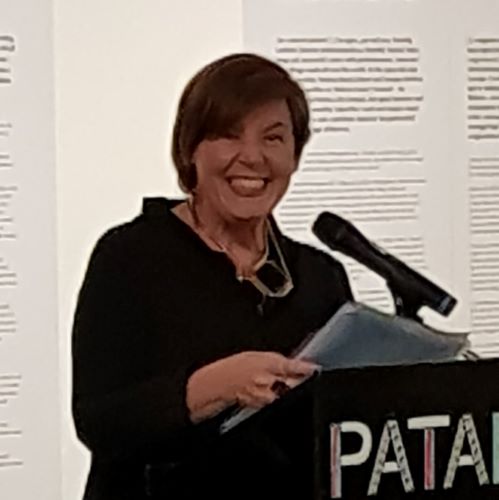 First up was Jan Logie, Greens MP, who acknowledged Mayor Mike and then Judith Collins as a campaign friend. Jan is currently Parliamentary Under-Secretary to the Minister of Justice for Sexual and Domestic Violence. She has a long history in social development in New Zealand. Jan said that one million New Zealanders were impacted by domestic violence with 1:3 women suffering psychological or physical family violence. Another 20-25% of incidents are thought to go unreported. These statistics cross all strata – races, ethnicities, social and financial groups.

Jan stated “it is our duty to the extraordinary strength of the survivors and to get them the help they need. The abusers must be held to account, but we must also hold out our hands to help them change”. Jan is committed to creating a culture of non-violence in New Zealand.

A pilot programme in Christchurch and Hamilton has brought together ten government agencies that will, for the first time in NZ, work together to deal with family violence and to be , rather than separately, responsible for a national strategy. They are collaborating with local communities and iwi and report to Jan.

Jan was thanked by President Donna Reed of the Rotary Club of Plimmerton, with a gift basket from Whitby Pharmacy which Jan donated to Women’s Refuge.

Judith Collins, National MP for Papakura began with a touch of relating to the tumultuous week the National party was having.

Judith pointed out that people usually only know what the Media present about politicians. She told us a little of her personal history which revealed a caring and passionate person.

A former Minister of Police, Corrections, and Justice, Judith was responsible, for forcing an into the effects of Agent Orange on former servicemen.

Another of her achievements was the successful “Puppies in Prisons” scheme in which puppies were trained by prisoners to do tasks to support people with disabilities, including opening doors and picking up a ringing phone. One woman, in Wiri Prison, told Judith that the best thing about the programme was the sense of purpose and power she felt in being able to help someone else. 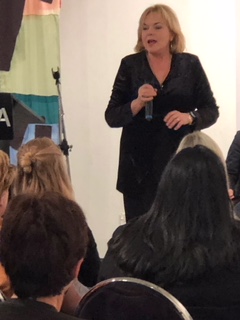 Judith agreed with the horrendous statistics presented by Jan but added that living in fear is abnormal in our society. No-one should have to live this way and most of us do not. She always the importance of education as it provides us with choices in our lives. Life, she said, was easier for people with choices. People who are educated have far more positive results in all the negative national statistics.

A final plea by this Wahine was to make weak men strong and to celebrate the strength of women. Wendy Betteridge, from Plimmerton Rotary thanked Judith. 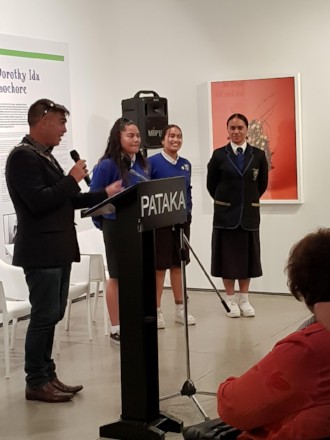 We were treated to a heart-warming rendition of a Gospel Medley by Le Art. These three young women from Porirua College, also very much Wahine Toa, are making a name for themselves as talented singers. As an aside, they sang the National Anthem beautifully at last week’s Silver Fern’s Constellation Cup netball game against Australia’s Diamonds. 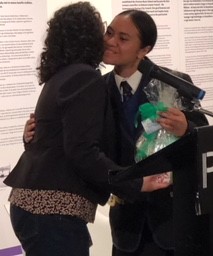 Le Art member, Lopa, Head Girl of Porirua College, was introduced by MC Mike. described her upbringing in which her parents fulfilled the traditional roles of men being the providers and women looking after the home, as had her mother, and mother’s mother and so on in Tokelau.

said, “What matters is the freedom to choose my own path without being restricted by gender.”

As well as singing, plays piano and guitar. Heading into a degree in Performing Arts and as a skilled musician, she has been appalled to hear people advise her that her career will depend more on her appearance than her abilities. finished an extremely moving speech by wishing, “Not to be a woman asking for equality but a person demanding it!”

What an amazing young person is. Her words will stay with me for a very long time.

President Paula Williams of the Rotary Club of Porirua gave an enthusiastic vote of thanks supported by the entire audience. 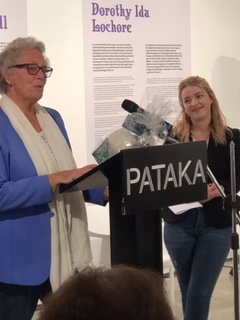 Our final speaker, Maisy Bentley, was New Zealand’s Youth Ambassador to the United Nations. Another treat was in store.

After attending a primary school where women’s achievements and leadership were celebrated, Maisy first came across attitudes from some boys at intermediate school. She quickly learned to deal with such negative attitudes.

Maisy said that helping someone to help someone else finds their strength and yours. She feels this engenders a feeling of being valued.

Maisy is emphatic that everybody can do “stuff” every day. We can all make a difference for Good. During her time at University, she has volunteered for charitable groups. In particular, Maisy described a project which included approaching staff at Glasson’s, New Zealand’s largest women’s wear retailer, to sell T-Shirts on behalf of her charity. Every Glasson’s store sold the T-shirts and $10,000 was raised to help lessen emotional violence in relationships and promote true love (as opposed to romantic love) for others.

Maisy wanted the older members of the audience to remember three things:
● Young people are really time poor so please be flexible when engaging with young people. Busy with tertiary studies, jobs to pay their way and volunteering, young people communicate online;
● The world is becoming increasingly complex, far different from the more simple world most of us grew up in;
● Strong women make strong men.

Maisy finished, “We are all affected by issues (of violence and gender discrimination), not just adults. We all need to work together to solve issues. New Zealand needs to be a nation continuing to lead the way in gender equality”. Maisy would like to be able to mentor another person.

Thanked by Wendy Betteridge, who is a great admirer of Maisy, we were urged to Google Maisy, especially her TED talk.

Wow! Our brains were full of fantastic speakers and their thoughts. I cannot recall a time when I attended an event with such fabulous speakers. All were inspiring and talented.

President Donna thanked the sponsors, Pataka, Breast Cancer Awareness, Nutrimetics, Whitby New World and Whitby Pharmacy. Chris Blick provided catering especially with the touch of the white camelia to Kate Shepherd. Marty Donoghue the drinks (well served by Phillip Reidy, who also took some great and Don Johnston). President Donna said our thoughts were with Assistant District Governor Adrienne at this time of family illness. She thanked the Rotary Clubs of Johnsonville, Tawa, Porirua, and Plimmerton. She made special mention of how lucky we were to have Mayor Mike not only still with us after his head-on car collision but in lending his support to having the event in the Pataka Exhibition Room, surrounded by “Wahine Toa.”

MC Mike Tana wound up the evening adding that we have a duty also to raise our sons to show respect to all. The funds from this evening’s event are going to digital devices for Porirua College leavers going onto Tertiary. Le Art completed the incredible evening with a rendition of their version of the National Anthem.

An Evening to Remember
+ Text Size -
Do NOT follow this link or you will be banned from the site! Original generation time 1.9678 seconds. Cache Loaded in: 0.0234 seconds.