The Rotary Club of Plimmerton in New Zealand is providing financial support for a female student to undergo a 4 year undergraduate course at Svey Rieng University. The scholarship is a new scheme started as the brain-child of a New Zealander, Bill Shields, who is a resident teacher/adviser at the university and the first foreigner employed there. Like many community schemes it has grown from his personal contact with Rotarians.

Svay Rieng is a poor rural part of Cambodia in the South East of the Country near the border with Vietnam at Bavet. It is not a tourist area and there are very few foreigners there. The University was built in 2005 and opened in 2006 thanks to donations from wealthy families who have connections with the province. The aim of the University is to provide affordable education for the young people of the province. 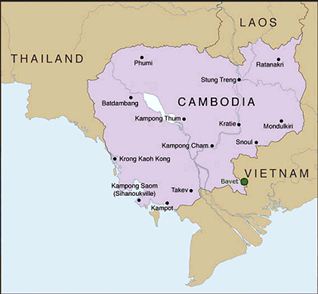 The Khmer Rouge took control of Cambodia in 1975 and remained in control until 1979. During that time over 2 million were killed including academics and people who looked like academics. The education system was destroyed with schools converted into pig sties and prisons. From 1980 until the mid-1990s there was a period of civil war while various factions fought for control. This ended with Hun Sen taking control and he remains in power now. With some stability, the slow rebuild of the Education system has begun.

While change is starting to take place in the large cities, in the poor rural areas the value of a young woman is her virginity so she can be sold into marriage. This is done to get money to feed the rest of the family or in some cases to send a son to university. Young women who lose their virginity, either through rape or pre-marital sex, are often discarded or put out into the streets. Some are then rescued by the Cambodian Centre for the Protection of Children’s Rights, CCPCR, and are provided with shelter, food and basic education. Some of these girls end up with CCPCR as young as four after being raped by someone within their own family. Most end up in poor paying factory work and do not get the opportunity of a university education. 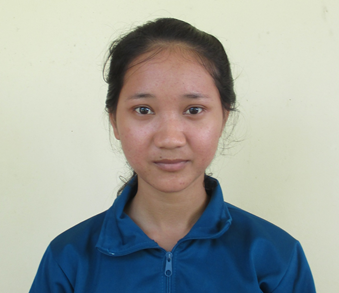 The purpose of this scheme is to bring these young women and Svay Rieng University together, through the provision of scholarships, which will enable them to get a university education and then be role models for others. The selection process is focussed on disadvantaged young women who have the ability to be successful in their study. Study priority areas are English, Business Studies and IT. These young women have a strong positive outlook and this scheme will provide an incentive for them to study hard to try and obtain a scholarship.

The first student to be selected is a young woman called Sok Vanda, who comes from a poor family. Her parents are manual workers. She has one brother and three sisters and they live at Ta Pov village. In Cambodia the family name goes first so her first name is Vanda and Sok is her family name.

It is hoped that this will be just the start and others will also see the value of the scholarship scheme and offer their support too. If any clubs wish to know more they can contact the Rotary Club of Plimmerton. It only needs a few hundred dollars a year to give a whole generation a bright new future.

We have received a short note from Sok Vanda which reads:

I am studying five subjects such as:

Everything is going well.

I really thank for your supporting without your help I can't come to study in SRU. I promise that I must study hard from now on to pass all the subjects that I have learned. At last I wish you to get good luck, long life, happiness and good health.