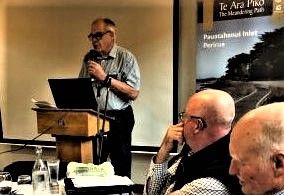 They are so confusing!

And that rule should apply to people who are “different” as well. Why can’t the world, or at least our country think like me – or maybe Winston Peters? Let’s have a universal set of values and a universal “Kiwi” way of doing things. Life would be far simpler. I’m sorry Winston, but I think you are on a lost cause – folk just too different to make it work.

A very simple case to illustrate this point:
A colleague at work appeared pedantic, inflexible, direct and abrupt - a real pain to work with. She probably felt I was this strange creature from left field that could not fit into any of her pigeonholes. We had to work together in a team, so had a professional responsibility to get on with each other. One day, as we discussed our different approaches, she dropped into the conversation – but Philip, you do I am Dutch.  That key unlocked an understanding of what made her tick. Those used to the “polite” indirect, deferential ways of the English or easy going “Kiwi” attitude struggle with the directness typical of the Dutch, Germans, Scandinavians, South Africans… A directness that is the norm in one culture is seen as rudeness in another.
Now that we understand how each other works, we are now the best of friends.

If Kiwis of Dutch and English descent don’t quite hit it off at first, what hope do we have for other groups in society?

To me, we should celebrate diversity, not force conformity. To misquote, the devil is in the differences. Diversity is always amongst us, it is the norm, not the exception. It does not always have to be big. It does not always have to involve race, ethnicity, sexual preference, religion, politics… Key is our attitude to, and exploration of diversity.

At the beginning of this Rotary year, we heard different stories about the rise of Pleiades or Matariki, and there is a myriad of other names given to that constellation. Exactly the same stars, in exactly the same place in the universe, but attributed different meanings and stories by different groups, depending on where and how they view them – both literally and figuratively. None of those views is necessarily right or wrong, they are just different. By hearing those stories, we can identify some common ground and acknowledge differences. The common ground gives us a connection point with others, the differences give the place of interest – adding variety and richness to our lives. We do not need to travel to find it, it is literally right on our back-door step.

How big does that common ground have to be? In the big picture, there are some fundamentals that define it – the sanctity of human life, the rule of fair and just laws. In Rotary terms, the four-way test. Does it need to be much more than that?

Relationships can be built on sharing and appreciating the differences. The common ground is the starting point of the journey. To start this journey, it does take a fundamental shift from views of right and wrong – my way or the highway, to an acceptance of difference and diversity, but the rewards can be huge. I’m not advocating we stop international travel, just maybe explore our own backyard as well. It can be an uncomfortable place to start with, one Abraham Lincoln addressed by saying: "I don’t like that man. I must get to know him better."

Aren't People Annoying?
+ Text Size -
Do NOT follow this link or you will be banned from the site! Original generation time 2.0012 seconds.