Editor's note:
Before the 2015-2016 President Adrienne Murray passed the baton to incoming President Peter Cox, she made a number of awards. Chris Garrett and Jenny Lucas were both awarded Paul Harris Fellowship Awards, and Phillip Reidy was awarded a Sapphire Pin to his PHF, for their contributions in so many ways. All were richly deserved. Wendy Betteridge was awarded a magnificent steel Kiwi on an engraved plaque for services to the web site. Bruce Couch received a new President's Award for his contribution to the President and the club, and it will be passed on next year to a recipient of the President's choosing. And finally, the President Nominee for the 2018-2019 year was announced as Donna Reed. There was also great entertainment from a troupe of dancers from Kuranui College in Greytown. The item was titled ‘Tere te Tapahi’, choreographed and led by Peter's granddaughter. Thanks to Graham Craig's photography, you can see a selection of photos from this Changeover in our Gallery. 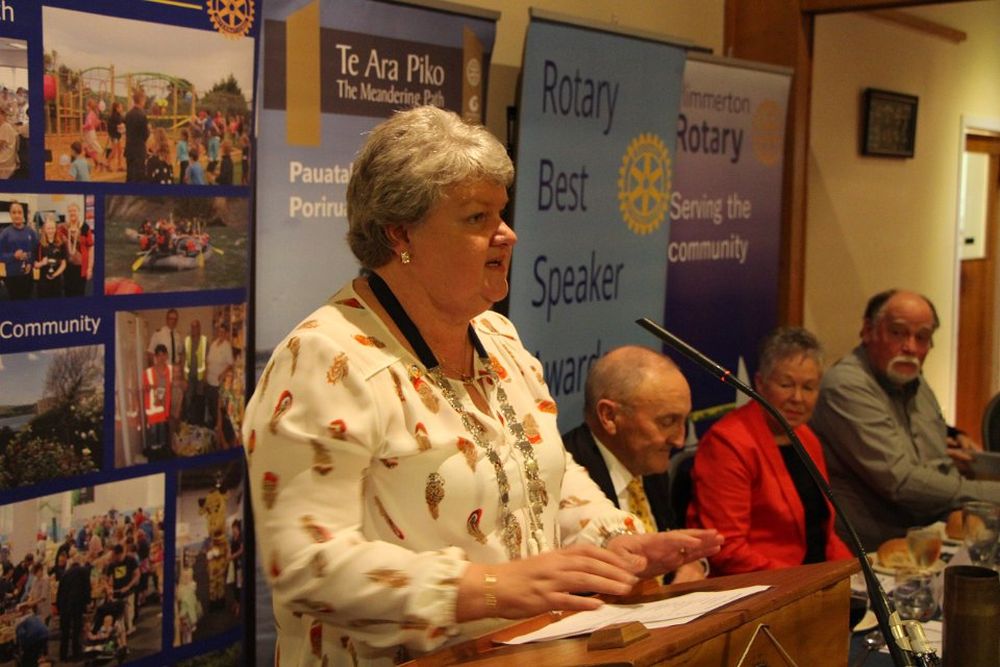 It seems like just a few days ago that I was standing in front of you all shaking in my shoes just from learning that you expected me to be confident and lead you all into another successful year. And what a year to follow. Thanks Chris.

We started the year with a unique event, one that I am told was a first in New Zealand. The only problem was that it coincided with a truly national event - the final of the Super 15 Rugby with Hurricanes playing Highlanders. It meant that we had to home by 7.15 at the latest - but the least said about that the better.

The joint changeover was hosted by Nick Leggett, the Mayor of Porirua who commented that this was Porirua’s 50th year and the first time that the two Rotary Club Presidents in the Porirua area in the same year were female. We were also honoured with the presence of past District Governors and PDG Howard Tongs came to MC the event for us.

District Training tells you to set plans and follow them, and then provides you with a number of goals that they want you to meet. So we looked at their goals, mostly ignored them and worked on our own. The Board had a vision to work with; that the Plimmerton Rotary community would be connected locally, engaged with Rotary International, while serving the interests and needs of our community.

The first object was to adopt a partnership model
We said that we would connect to community groups and pool resources and knowledge, with the aim to have better outcomes.

We have run activities and events where we have worked on some events with Porirua Rotary Club, some with Porirua City Council and some with both. Changeover, and the Primary Schools Leadership Awards come immediately to mind. We have also worked with Mana Zonta on the Celebrity Debate.

This year our International student was ‘shared’ with Porirua and Tawa Clubs. Not one club alone was able to find three or four host families, so we shared Helena Sak from Brazil. It worked well. This year we are keen to get back to our tradition of hosting a student on our own and this will happen when Laurie arrives from France next month.

There have been others shared events like projects with the Inner Wheel Club of Plimmerton. Inner Wheel has worked with us successfully over a number of years with the Book Fair. This year the joint project of the Pauatahanui Garden Trail was very successful. There was wonderful food on both occasions - thanks for all the baking and of course the number of people who worked at the various garden locations.

We have even had one event where we worked with Rotary Clubs in other parts of the country. Thank you, Julie for organising the Rotary Best Speaker Awards for the second year. Demand is high for this to continue.

We have a very successful relationship with Porirua City Council across several fronts. Te Ara Piko on strategy, joint funding and managing the build - but they still leave it to Bruce and Mike to find the weasels and the stoats. We have just signed a memorandum of understanding with the Council to work with them to review the City’s playgrounds with the objective of making as many as possible truly accessible for all children. John Barber and I will work on that together.

The second objective was to embrace change - to have a relevant club now and for the future
We wanted to respect traditions, embrace new ideas and acknowledge our club's mana. We expected that this would lead to active participation. This led to full houses at most meetings, with lots of chatting, laughter and discussion of new and potential ideas. New projects were put forward, promoting the youth in our community whilst maintaining some of the projects of the past, children’s parties, speech contests, primary children’s awards for service to their school. New projects included the new Garden Trail. We continued with the Annual Book Fair, the traditional Christmas party and the Melbourne cup evening. We organised a Flappers and Dappers evening with our DG, a ‘Roast’ of one of our own. What a fun night that was, even if the Club Service team had their hearts in their mouths, hoping it would be a success - as did I! We had a brand new and totally different Changeover at the beginning of the year and we’re enjoying a very traditional Changeover now. I think we have both respected traditions and embraced new ideas.

The third objective was to increase the public’s knowledge of Rotary, gain community buy-in, achieve more sponsorship and organise more successful projects
No one can doubt the success of the Prime Ministers breakfasts that were the brain child of Chris Garrett, first held in his year, which meant that more people know about Plimmerton Rotary. It also resulted in Chris accepting a citation from Mary Potter Hospice on behalf of the club for our support of the Hospice.

And of course there were individual awards. Ron, for Te Ara Piko yet again and an award at the Porirua 50 year celebrations. And, at District Changeover on Sunday, we received a District Award for Public Image and Communications.

The Primary School Leadership Awards was a great event which we ran in conjunction with Porirua Rotary and Porirua City Council. There were certificates for over sixty proud children, accompanied by proud parents and proud principals. This year we need a bigger venue for all the whanau who wanted to be there too. After such a successful event embracing all thirty-two of the primary schools we are looking forward to running this event again in September. We have full support and some of the funding from the Council.

The Garden Trail will happen again in November because the public want it (and of course because it makes quite a lot of money). Our thanks to Jenny Jackson and her team for all the organisation.

The Primary and Secondary speech contests will continue. Peter Sinke has created great videos of the some of our major events and our thanks go to David Knight and his team for the great organisation he puts into these events.

We are a vibrant club with lots of stories to tell and we are well-known through the district as a very successful club. I would love to take recognition for this but it is an accumulation of many, many years of hard work, fun and public involvement.

Thank you to Jenny and her Communications team for our frequent articles in Kapi Mana and Whitby NewsBrief and thank you to Wendy for our articles in RDU, Rotary South Pacific Blog, Rotary International Showcase and District Newsletters. We have even been mentioned in the Dom Post.

Our web site is part of the wider network of the Porirua region, aligned to the community as well as to Rotary, and it works. Numbers of people visiting the site continue to rise. We have Wendy to thank for this. The hours that she has put in to develop our website have been phenomenal. She works long and late hours, I know this from the time that emails are sent. Watch out Pete!

The success of our projects is signified by the requests that we repeat them and that we enlarge on what we have been doing.

An example of this is the request from other areas in Porirua that we help them set up cross primary school speech contests and manage a final across the whole of Porirua. At the thought of this, David Knight throws his hands up in horror!

Our speakers have informed, inspired and entertained. We have had some great speakers, some good speakers and as always, some OK speakers. Regardless of this, you kept coming back. Thank you. And thank you to Phil Reidy and his team for organising this for us.

I have not talked about all the things that we have done. However I would like to thank the International team, in particular Nick, for arranging the University Scholarship in Cambodia, a scholarship that continues for 4 years.

For Peter Lillico, for cutting, sorting and selling firewood, not to mention his team, including Bryan Waddle, who took over while Peter was off overseas.

For the work of the Youth Committee. Grant a Wish has been going for five years now and we have been able to support a number of primary schools in East Porirua, Waitangarua and Cannons Creek with a range of things from Wifi systems, speakers, sports equipment and computers, to name just a few. And then there’s RYLA, RYPEN, the Science and Technology Forum. I could go on.

Police vetting of all club members is a new requirement and meets the new expectations around security for working with children. This is, of course, something that we do on a regular basis. Thank you to everyone for your wholesale support with this.

I have not talked about the RI and Foundation information sessions that I think were a success.

I have not talked much about Te Ara Piko our largest, most time-consuming and most expensive project. It continues on. Whilst this year may have looked quiet it has been like the ducks - quiet on top and madly paddling underneath, gaining consents, doing repairs, applying for grants, etc.

And I have not thanked Don tonight for his role in membership. Over the last four years he has introduced 28 members into the club. He apologised to me that he had not reached thirty.

It is important to acknowledge the people who manage the administration and finance – Roy and Bruce. I always assume that everything is working properly there and when I've checked, it certainly is.

One other person to thank is my husband, Ian. Using his words – ‘it is best to simply let you get on with it’, and that he has done, supporting me all the way.

I can’t finish without thanking the Board. Without their support I could not stand here and talk about a successful year. It has not always been easy but we have reached this point, surviving, happy, successful, and with a good reputation, quietly having embraced change as we have respected our traditions.

And on that note I will say thank you to you all.

Peter, I believe I hand you a club in good heart and with a good reputation. Over to you …