Ron Lucas, Chair of Club Projects, gave a comprehensive outline, both of completed projects and those still in the pipeline. He is seeking a leader or two for the Transmission Gully project scheduled for 22 April so if you'd like to put your hand up, please let him know.

Mike Doig gave us a thought-provoking introduction to his Yellow Book, and you can read more about that here. 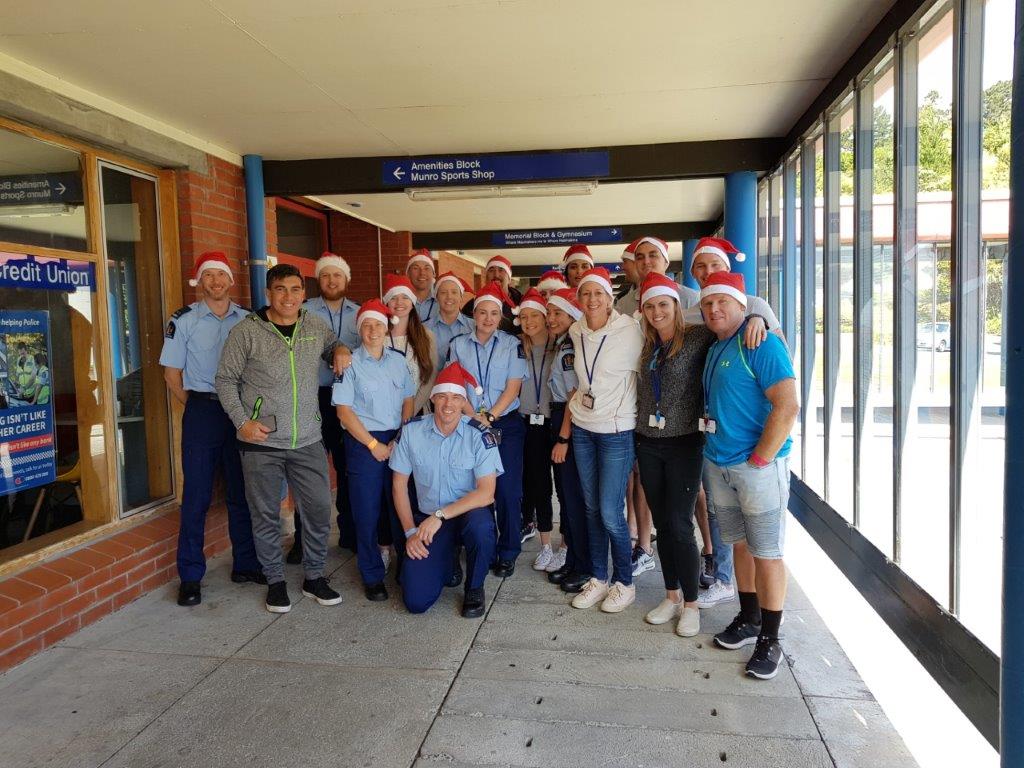 The Children's Christmas Party on 18 December was a great success. There were two intakes of Police Recruits - those going out and those coming in who have been there for two weeks (and are still in mufti). Mayor Mike was there to join with the fun. Chief organiser, Ian Turner, thanked everyone for the help received on Saturday. It was a very successful party and a report will follow shortly. Graham Craig took some lovely photographs which will appear in our Gallery soon.

David Knight has arrangements for the Parumoana Speech Competition on Friday 1 December from 9.30-11.00 well in hand. You are encouraged to come and listen to the creative, entertaining and well-delivered speeches given by some of our primary school children.

Nick Walmsley read out letters of heartfelt thanks from the two young women whose tertiary education the club is sponsoring in Cambodia. They are both studying hard and doing very well.

The Pop-up Shop was the first fundraiser of the year and President Jenny offered many thanks to Allan Nichols and Adrienne Murray for their organisation. Inner Wheel made approximately $3,200 and Rotary approximately $1,500. There will be a report in more detail soon. Allan thanked everyone. He also said (tongue in cheek) that Porirua City Council would not be using the space so it will remain available if anyone wants to run it!

Following her extended trip away in South Africa, Debbie Mair presented President Jenny with a beautiful flag from the Rotary Club of Hoedspruit depicting the big five - Rhino, Buffalo, Elephant, Lion and Leopard. She outlined some of the projects needing funding. You can read more about her adventures here particularly about the Black Mamba Project and the Bush Babies Education Program run by the Black Mambas which is receiving worldwide recognition. 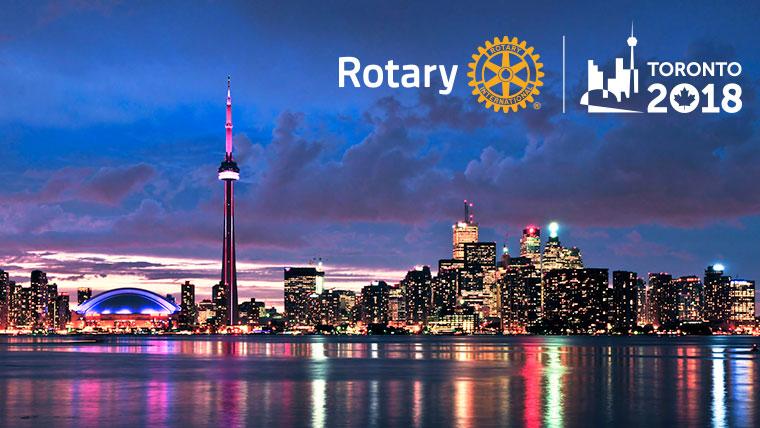 Register by 15 December to take advantage of the early bird discount. It's said that you'll find inspiration around every corner of the 2018 Rotary Convention in Toronto, Canada.

Graeme Blick gave us the parting thought:
'Be prepared!'
(He didn't forget his duty, did he?!) 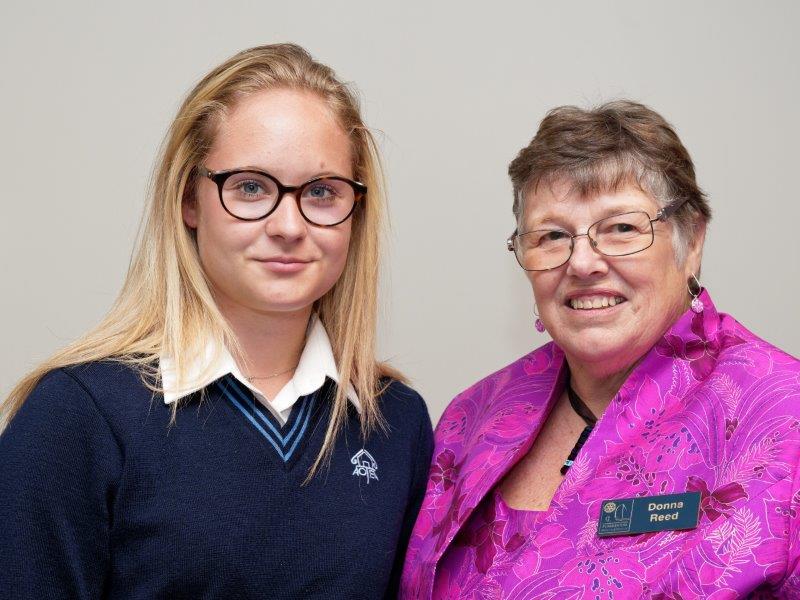 As promised last week, here's the information about the Service Above Self Awards presented by Donna at the Aotea College Prizegiving on 7 November. Amandine featured at the prizegiving, receiving awards for English, French and Te Reo.

A meeting, detailing the outcome of the Playable Porirua Audit was held with not only the Parks team but also members of the Council from other teams who have an interest in Porirua Parks. The council has determined four priorities, two of which they are wholly responsible for. The other two are of interest to us as well of course Plimmerton Rotary Club and now Porirua Rotary club who have joined us in this important project. They are improvements to our destination and community play spaces and retrofitting of some older playgrounds to improve playability. The team from our clubs will meet later this year to develop our own preferences for funding and support. If you have any comments that you would like input to our meeting please email Adrienne at amconsultingnz@gmail.com

Special Olympics week will run from 27 November to 1 December. We have committed to help at the Opening Ceremony from 7.15-12.30 on the 27th. The Special Olympic organisers are desperately short of volunteer helpers for some of the events so if you can help through the week, please let Jenny know. If you are one of the helpers, please arrive at Te Rauparaha Arena at 7.15 am on Monday.

Next week, Jan Nisbett will talk to us about her passion for the outdoors, cycling, kayaking, travelling, including a stint of 3 months on the Galapagos Islands. She will also be talking to us about bicycles ...

And very soon after that, on Friday 1 December, it's our Christmas Party at The Spine at Pataka. This will be in lieu of our meeting on Tuesday 12 December, when there will be a Grandchildren's Christmas Party, so your $25 meal money will go to cover your costs on 1 December. Bruce will send out invoices for the balance. Please remember to bring money or a Christmassy food gift for the Food Bank and additional pennies for the raffle.

Whitby New World is doing a major stocktake on the evening of 3 December, from 6.00-9.00 pm. They will pay $18.00 per hour and we are looking for volunteers. A board went round this evening, but if you missed it, please let Donna know if you can help as this will be our second fundraiser of the year. Tell Chris Garrett if you want to go to the monthly Wine & Cheese beforehand.

Committee night is on 5 December, the AGM on 19 December, and the first meeting of the New Year will be a social evening at Ron and Jenny's on 16 January 2018.

And looming ever closer is the Garden Trail on Sunday 28 January 2018. Vouchers and tickets are now available and the proceeds are very important for the ongoing development of the Pathway. Gift vouchers would make wonderful Christmas presents so get those thinking caps on.

Please arrive at 5.45 pm if you're on Door duty.
Please arrive early to greet the Guest Speaker and be his/her host for the evening if you're on Introduction duty.
Unable to do your duty? Please find a replacement and inform Philip Mottram.
Need to apologise? Email the Receptionist at Professionals before 10.00 am on the Monday before the meeting on paremata@dwre.co.nz Or you can ring on 233 9955 if you prefer.
If you are bringing additional guests, the same time-frame applies and please make sure that you provide the name (and spelling if necessary).
The same applies if you need to let someone know that you're going to be late. 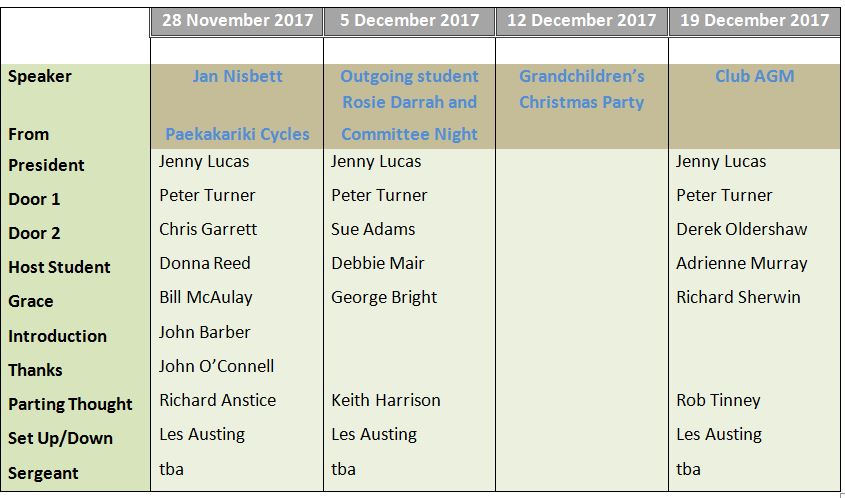 Weekly Update - 21 November 2017
+ Text Size -
Do NOT follow this link or you will be banned from the site! Original generation time 1.6935 seconds.