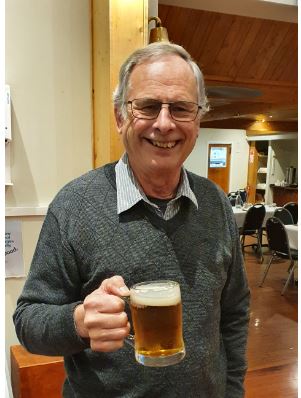 Some 30 years ago, our speaker tonight, John Burnet, acquired a single beehive, and this introduced him to the exciting world of bees and the consequent growth of his hive holding to twenty-four. This hive empire, which is urban-based, produces about 200 kg of honey in a year and John consumes some himself and then sells the surplus on the local market.

Bees are essential for pollination in agriculture and horticulture and so, in 1839, Mary Bumby managed to establish two hives in the Hokianga (imagine the issues around bringing hives on a sailing ship from the other side of the world!) and then commercial beekeeping was established in 1878.

Most bees in New Zealand are honeybees (an Italian variety) although there are less social and shorter living native bees and smaller numbers of other introduced bees.

We have the highest number of hives per capita in the world with 885,160 registered hives with 10,340 beekeepers managing them.

We all know about the pampered life a Queen bee leads but of interest was the fact that any worker bee can be transformed into a queen if the need arises. The queen also, by choice, chooses the sex of her offspring.

Worker bees are infertile females, and they work a punishing schedule during their life that can last from six weeks to six months in the winter. It is all work and no play.

The drones are indolent males; however, there is a certain brutality to life as they are thrown out in winter when the hive population declines from around 60,000 to 20,000 and their sexual abilities are no longer in demand.

There is considerable interest in having bees in an urban environment and brightly coloured hives can be seen in many locations. If you have wondered why the multi-colour hives exist, the answer is it helps the bees find their home after a hard day in the field.

There are many plants that can be used to attract bees which are in everyone’s interest but the tip that found the most favour was to let your lawn grow longer by mowing less frequently.