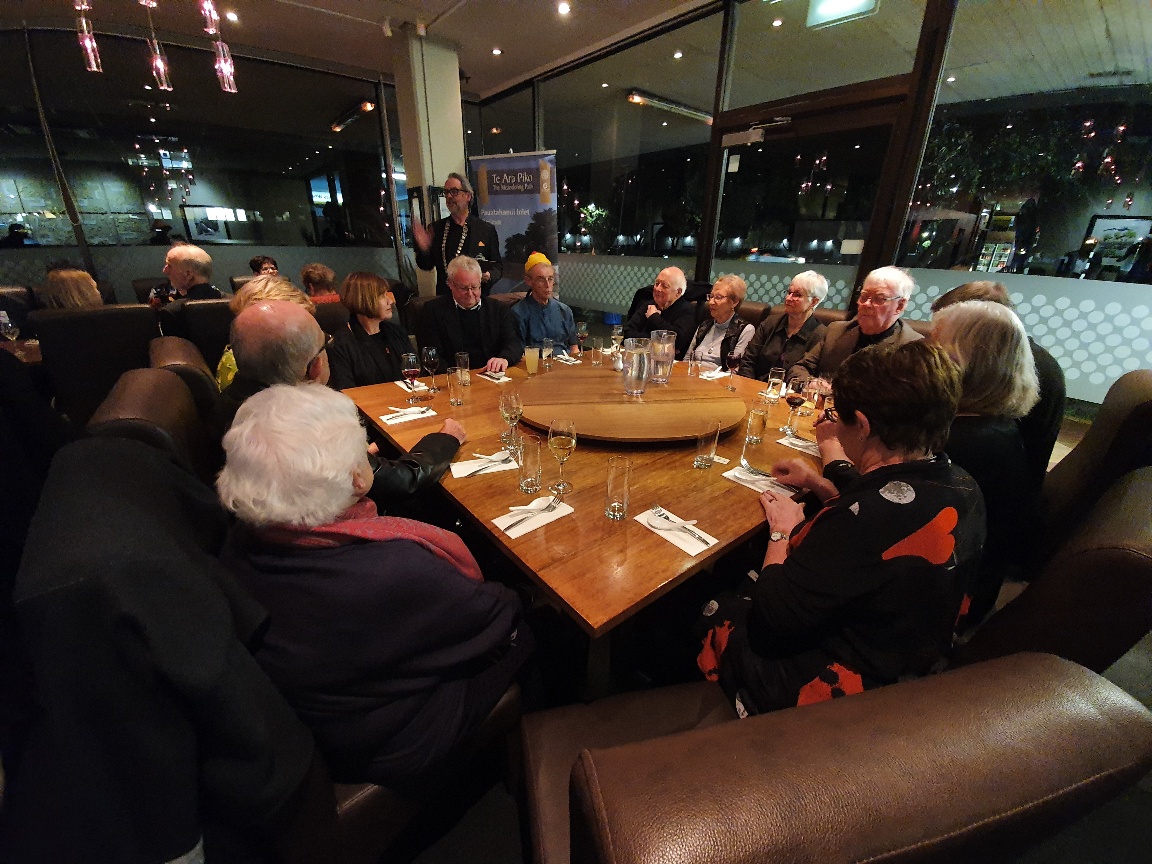 President-Elect Bill had suggested that some members might like to dress with a Chinese theme and there were several weird and wonderful attempts to enjoy and appreciate. He congratulated those who had given it a go.

President Euon spoke to an excellent visual presentation (beautifully prepared by Phillip Reidy) which showed all the things that were accomplished during his year. He'd imagined, before he began to prepare, that it wouldn't have been a very long list, given the dire circumstances of the lockdowns. However, as you can see from the presentation, much was achieved. Euon also highlighted the events that would have been accomplished if things hadn't taken such an unexpected turn, and these have been postponed to an assortment of dates in the future. He thanked all the members for the support he had received during the year. 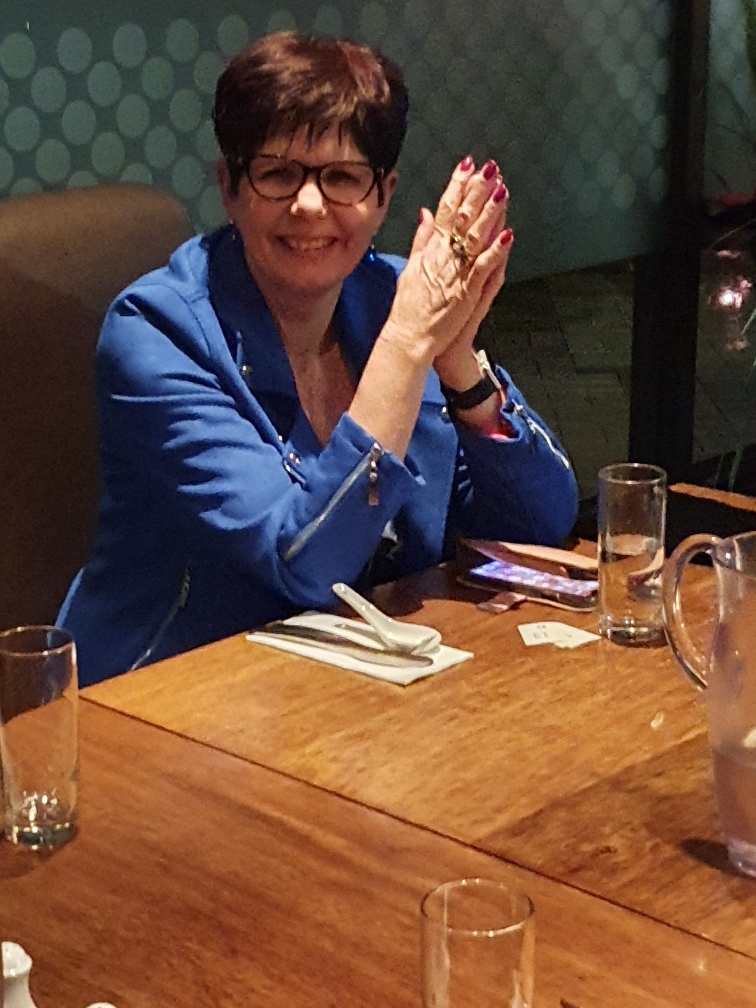 And then it was time for Mayor Anita to present some awards. There were so many, that the photos appear on our Gallery page (with apologies to some subjects for the poor photography). President Euon remarked that many of the Awards he intended to hand out were timely as 2020 marked the twentieth anniversary of our involvement with Te Ara Piko. Unfortunately, two awards couldn't be handed out, one for Brian Paget who has sadly died, and Roger Fitzpatrick who now lives in Australia. However, he was delighted to honour the following: 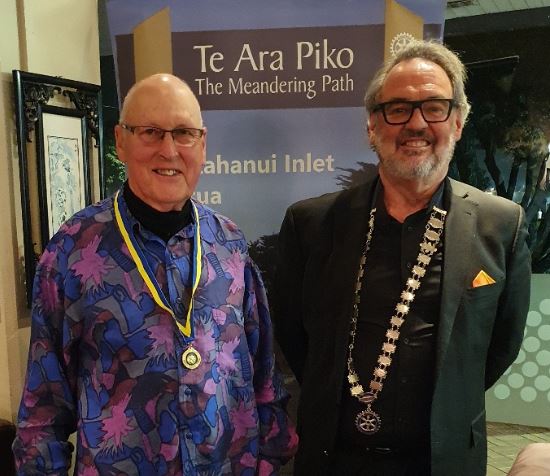 And President Euon wasn't finished! It was with great pleasure that he followed with a special award of a Paul Harris Fellowship to Graeme Tongs, Secretary extraordinaire for many years. It was clearly a popular decision as many members are aware of the thorough and detailed work he does behind the scenes. 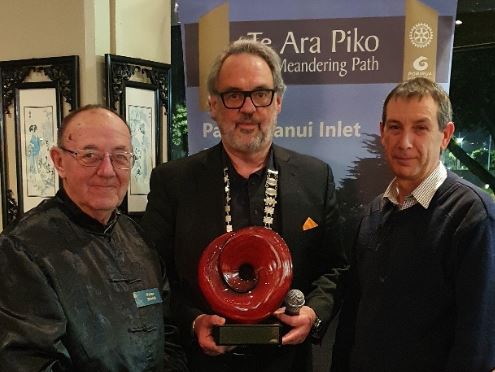 And there was one final award to present, the President's Award for an individual who, in the President's opinion, had given service over and above 'the call of duty'. Euon said it had been too hard for him to choose between two members who have given the Club exceptional service during the year and he invited Keith Harrison (our speaker seeker) and Peter Sinke (our IT guru, especially during Covid-19) to share the Award until the next Changeover. 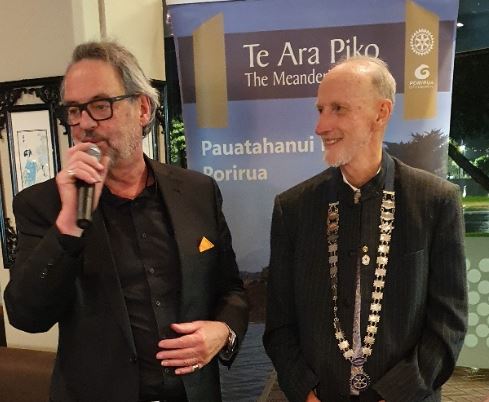 Finally, the moment arrived when it was time for President Euon to hand over to President-Elect Bill McAulay to take over as President for the 2020=2021 year. The chain duly changed shoulders and pins were exchanged.

President Bill then delivered a short presentation giving some insights into the things he would like to emphasise in the year ahead. More will be revealed at our next meeting on 7 July when President Bill will chair a meeting called 'Opening Opportunities in 2020 - the New Normal'. You can see Bill's presentation here.

Here's a Notice from your Fellowship Director, Kay. President Bill and I have agreed that Fellowship should take a greater place in our Club this year. Covid-19 kept us isolated for too long. We want to ensure that you all feel connected under the two main tenets of Rotary: Fellowship and Service. Two of our major Fellowship events require some advance planning so at next week's meeting there will be check sheets passed around to indicate interest in:

We have received a letter of thanks from Gaylene Lines, Rotary Youth Exchange Incoming Chair Here's an excerpt. 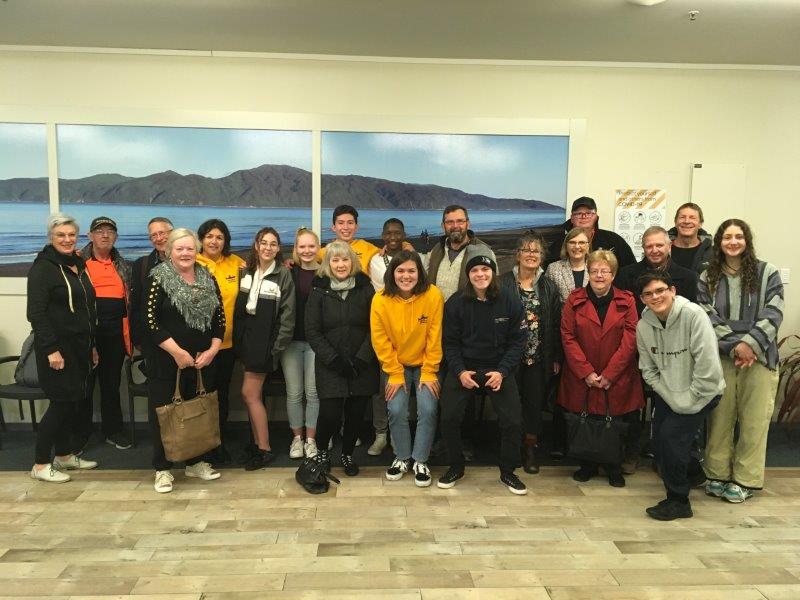 'Firstly, my very grateful thanks to the Plimmerton and Kapiti Rotary Clubs for agreeing to host a student each this 2019/2020 year. I know I have said this many times before but without Clubs so big-hearted as yours and having host parents who also are able to take in a student and give them a loving household makes the world of difference to our children and young people around the world. Unfortunately, this year was not one that any of us envisaged. It was devastating. It was very hard on host families too. Unfortunately for the Chilean boys, they 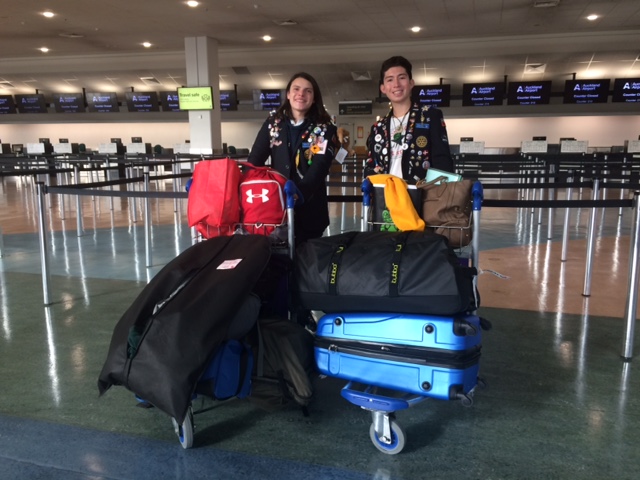 could not do anything about it. To go home early was not an option as their borders had closed February/March. The boys did not want to go home either hence our letter to your Clubs asking what your thoughts were. Getting them on the repatriation flight yesterday was definitely the right time for them to return home. I also think the repatriation flight was the right one thus not picking up any germs during that flight back to Chile. I, and our RYE Committee members were privileged to have had your Club's support for Cris and Felipe's home journey and for seeing all the families that came to see both boys off and to have been able to fly up with the boys in case they needed support along the way or in case their flight did not take place'.

Bill Day, Chair of the Wellington Hospitals Foundation and Wellington Rotarian, has written a media release saying that Wellington Region's New Children's Hospital took another significant step towards completion on the weekend of 27 June when builders McKee FEHL removed the multi-storied crane, allowing the new hospital to be completely enclosed and interior work to take place. You can find more information on the WHF web site.

Editor's note: I have been attempting to bring the web site into the new Rotary year. If you see any reference to the 2019-2020 year, please let me know!

Nick Walmsley, our new speaker seeker, has designed a google calendar showing upcoming events for the year as they are arranged. If you go to the Home page, you will be able to open it and download it.

Future events can be found on the Events page here.

Given all the excitement (and noise) our new President Bill forgot to call upon Nick Walmsley to give the Parting Thought which came from a novel by Marthe Troly-Curtin, an early 20th-century author. It was especially for those who don't believe in relaxing; 'Time you enjoy wasting is not wasted time'. 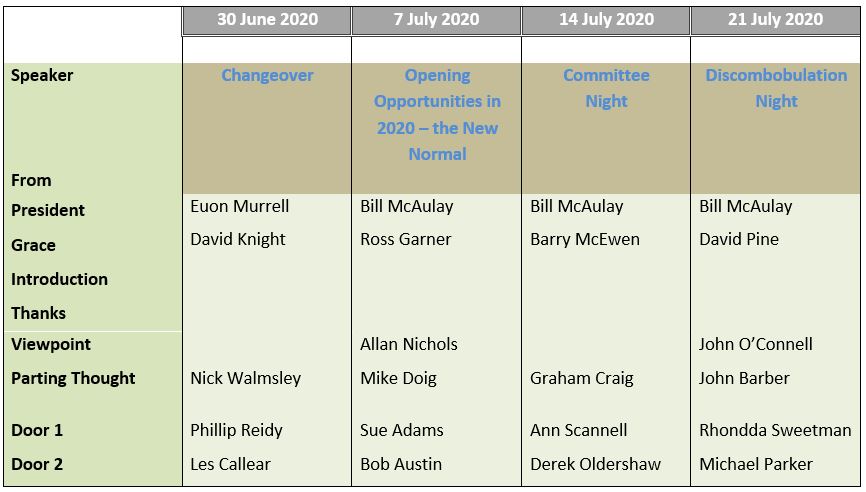