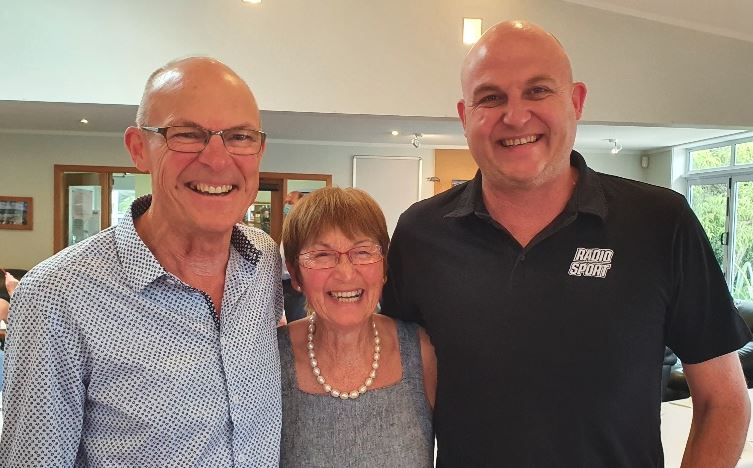 President Kay warmly welcomed our guest speaker, Broadcaster Jason Pine who had already been given a big hug by his parents, David and Margaret. She also gave a warm welcome 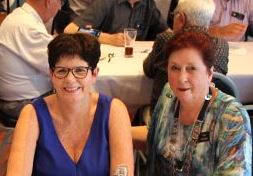 to Mayor Anita Baker, one of our Honorary Members. She also welcomed Alan Chadd, a guest of Peter Sinke who soon gravitated towards Allan Nichols where 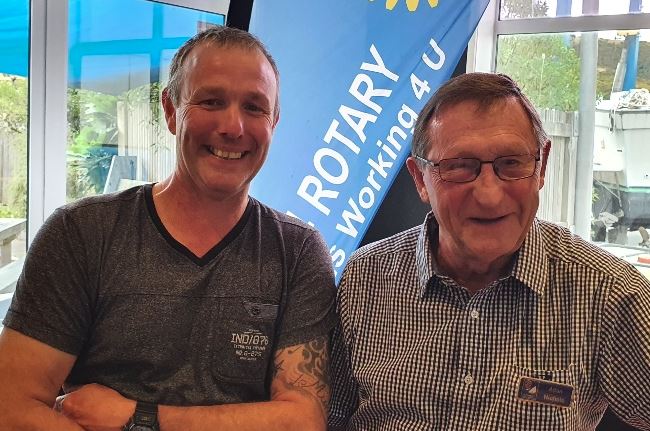 they both happily conversed in their native Scouse accent! Other welcome guests included Glenys Greaves, Bev Lillico, Margaret Pine, Faye Raffan, Janet Reidy, and Joy Tongs. Graham Craig took some photos at the meeting and you can enjoy those here.

Apologies are not ordinarily mentioned but Kay asked members to keep in contact with Peter and Jenny Jackson who are wisely self-isolating at present to avoid the potential dangers of Omicron. 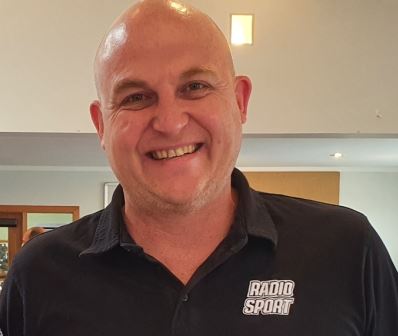 As Mike writes, 'After a false start pursuing a career in the law, Jason saw the light and enrolled at Broadcasting School in Christchurch. This was followed by the normal progression in Broadcasting- working at a succession of regional stations but getting ever closer to the centre and to national exposure. Keep reading ...

What’s coming up in February and beyond?

Next week, 1 February, is Committee Night. As we have a lot to get through in the next six months, Kay would appreciate it if all members attended.

Kay has sent out an invitation to a Rotary women's morning tea gathering at 10.00 am at Judgeford Golf Course on Friday 4 February. The caterers need the numbers in order to prepare so Kay would appreciate RSVPs as soon as possible. Members - please remember to pass this invitation on to your partner if she hasn't already seen it! Kay also asks that the women members and partners keep 2.00-4.30 set aside for a 'Surprise Event' on Thursday 10 February. Kay will explain what it's all about at the morning tea on Friday 4 February.

Allan brought the welcome news that the Melbourne Cup night which was sadly postponed in 2021 will be replaced with a Casino Night and BBQ on Tuesday 8 February. As always, there will be unbelievable prizes including those for the Best Dressed Man and Best Dressed Woman.

Phillip announced that there was to have been a movie night in aid of End Polio Now on Thursday, 17 February at The Light House. The movie is The Duke, 'a ridiculously charming British comedy'. It is based on the true story of a 60-year-old taxi driver who steals Goya's portrait of the Duke of Wellington from the National Gallery in London in 1961. He sends ransom notes saying that he will return the painting if the government invests more in care for the elderly. The actual painting was not recovered until 1965. However, since the announcement, Phillip has decided to postpone the movie night until later in March. With signal red protocols in place there is a limit on the number of seats available and hence the fundraising potential is significantly reduced and the socialising beforehand is also limited. The same movie, so watch this space.

Kay introduced a new project, A Community Garden. Graham Craig reported that investigations had shown that there is a significant need for fresh vegetables and two Foodbanks have indicated that they have no access to them. The Club has provided funds, in conjunction with the Menz Shed to make a start, and more funds are expected from a Community Trust at the end of March. A committee has been set up with Carole Brown, Graeme Blick, Ron Lucas, and Graham himself. The land has been cleared and levelled, trenches have been dug and pipes have been put in for power to the shed. Wood is on-site and the first garden has now been established. The team needs more helpers, perhaps 1-2 hours each week, to look after the gardens on an ongoing basis. The first garden will be up and running in the next couple of weeks. Garden beds will be raised!

Kay has sent out an invitation to a Rotary women's morning tea gathering at 10.00 am at Judgeford Golf Course on Friday 4 February. The caterers need the numbers in order to prepare so Kay would appreciate RSVPs as soon as possible.

Phillip thanked those who had voted for Te Ara Piko as the People's Choice for the Wellington Airport Awards and hopes that the Club will be successful in its class in the final awards. Due to Covid the awards ceremony has pivoted to a virtual event.

Phillip also reported on the meeting late last year with the senior management  of  Todd Digital (including our own Mike Scott), on the project being worked on. There is still time for more volunteers to put their names down for the trial, so if you interested please let Phillip know.

Phillip also reported on some memorabilia that had been given to the club by Gordon Gandell's daughter.  Gordon was the Charter President in the 1973-1974 year and the documents will prove useful for the 50th celebrations next year.

Donna reported that, thanks to the generous couple who have donated funds for the past two years to buy clothing for children who haven't sufficient of their own, there is now a sum of $12-13,000 available, thanks to a District Matching Grant that was put in place. The fund has now increased, thanks to a second family whose donations are also being matched. Two kindergartens in East Porirua are the beneficiaries at present. They are setting up an office as a shop and the little people work out their shoe size and choose their own shoes. One child sat on the couch and looked at her shoes all day! Donna needs some volunteers who will go shopping with her! This is a project that is making a real difference and demonstrates the effectiveness of leveraging District Grants.

The ShelterBox’s Emergency Response Team has been closely monitoring the situation in Tonga and, after consultation with local partners, it has been decided that ShelterBox will not be responding in Tonga.

The need for shelter around the globe due to disaster and conflict displacement is huge. With such unprecedented need, it is important to focus on responding where people will not receive shelter support from any other sources after a disaster, and where there is a clear need for ShelterBox aid.

In Tonga, large-scale government responses are being provided by New Zealand, Australia, China, and with further support from Japan and the UK. Support is also coming from other organisations with local or regional presence, including the Red Cross, UNICEF, and Rotary New Zealand’s ERKs. ShelterBox is Rotary International’s Project Partner in disaster relief, and we are proud of our deep global partnership with Rotary. In this instance, the needs of Tonga are better met by the provision of ERKs

ShelterBox New Zealand relies on ensuring they are prepared to help wherever needed in the world. They welcome donations from Rotarians around Aotearoa New Zealand at any time during the year, and are grateful for the ongoing support of so many New Zealand Rotarians. More information can be found here.

The RYPEN Convenor, Mel Cook, reports that the RYPEN programme which was to have run from 25-27 March this year will not go ahead, given the challenges of the COVID restrictions. The decision was made to postpone until such time as they have confidence that they can run the weekend safely for all concerned.

Michael Parker gave us the Parting Thought tonight. 'Nothing's right or wrong, but thinking makes it so'. 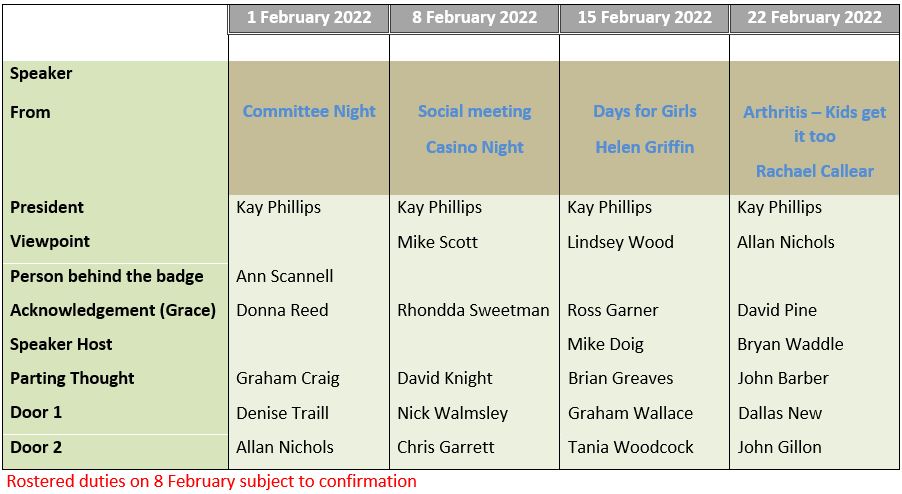