President Euon welcomed members to the new year. He said he was not planning to spend much time on notices at our meetings and urged members to read the Update to get their information about things that are happening. He was keen for the Committees to have as much time as possible for their first planning meeting and would be finishing the meeting quite quickly.

Talking to his slides, Richard Sherwin explained that he was giving members an update on the progress on Te Ara Piko. As members know, this is a joint project with Porirua City Council (PCC) who will always own the Pathway so that no costs for ongoing maintenance will fall onto the shoulders of Plimmerton Rotary. PCC is delighted with the joint partnership as this is the only one they have entered into which has actually worked. Usage of what has already been completed continues to grow. Following a presentation to PCC, Phillip and Richard got another $400,000 allocated in their Long Term Plan. The Pathway committee has, in effect, raised the funds from external sources and have ensured that there has been no drain on club funds. The final section is expected to be the most expensive. Detailed costings are still being finalised but the club will need to raise a further $50,000, even though there is no binding commitment. Building the pathway is only part of the club’s contribution. There has been a huge input of over 10,000 volunteer hours in addition to the $1,000,000 raised. The Whitby side of the Pathway is in the hands of PCC and New Zealand Transport Authority. You can see Richard's presentation here.  Viewpoint_July_2019

As there were no notices in last week's Update, some of this news has been waiting for two weeks.

Plimmerton Inner Wheel celebrated their Changeover on 18 June at a fun occasion when outgoing President Janet Reidy handed over the chain to the incoming President, Yvonne Thomson. Brenda Callear is Magazine Editor for the District and you can see their June edition here.

On 20 June, Rotary launched their centennial projects at Government House. Apart from a photo of the incoming District Governor, John Mohi, it's good to see Le Art performing at such a great occasion. And for those of you who would like to listen to John Mohil's speech at the occasion, you can listen to the video here.

The New Zealand International Film Festival has announced thirteen new New Zealand film premiers, Among these is one made by Tania Woodcock's partner, Tony Sutorius, with his documentary, 'Helen Kelly - Together'. These will be shown in Wellington between 26 July and 11 August. There may be a party wanting to go. A few of us have already seen Tony's documentary and it's outstanding.

Following Leigh Corner's Viewpoint, you may have received the email from Peter Turner about the importance of getting vaccinated against Shingles. He sent a link with his email which is well worth checking out.

WELLfed has sent out their Winter 2019 Newsletter and we've got a mention! They're doing well, as you can see if you read their newsletter here.

A new membership list is now up in the Intranet which you can download as a pdf. Things may change from time to time, as they often do, but this list is up to date as of 1 July. If you scroll further down the right column on the Intranet page, you will see that the Board and Committees for 2019-2020 have also been loaded.

Deb Mair has let us know that Fonterra air freighted a 1.4MT shipment of milk powder that arrived in Sabah on 21 June for the orphan elephants. $13,827 was raised for the shipment which will feed the elephants and keep twelve keepers in jobs. These unskilled keepers (wildlife rescue team) have been trained through an Oregon Zoo program. They go into schools in Sabah and teach children about endangered species and why people should not poach animals for bushmeat or monetary gain.

We have received information about an initiative that some of you may be interested in. A new job site called 'Seniors@work' is about to launch, and is designed exclusively for people over 60 who are looking for work opportunities. It has been set up by a fellow Senior as a tool to connect employers with a fantastic pool of talented, skilled and experienced people who can add real value to the workplace i.e. us! If you are interested in learning about great work opportunities guaranteed to be suitable for those aged 60 plus then you can visit the job site and hit the “Register” button to create an account in just two simple clicks. For the social media savvy amongst us, you can also like and follow them on Facebook at https://www.facebook.com/SeniorsatworkNZ/. If you’d like further information, contact Ian Fraser who can assist you in registering as a Job Seeker (or even a potential employer).

Our Peace Scholar, Jessica Sebastian, sent us happier news last month. 'Admittedly the first few months was a hard slog and if I’m honest, I truly wondered whether I had made the right choice. But support and connections are important. I am loving Berlin and feel much more optimistic about my time in Germany now with a bit of hindsight and distance from the racial incidences. I’ve had two winters in a row so am ecstatic to have some lovely weather. I will, however, be 'up the wazoo' with essay writing and prep for my thesis – so excited about my topic – which is to assess the overall effectiveness of protection orders for women of migrant/ethnic backgrounds. I’ve had some support from Women’s Refuge about this topic (I had a colleague from here that helped me hone my topic) and leaving space for the fact that this could become a PhD proposal. I have met people from all universities around the world too who have suggested their unis for consideration (Copenhagen University, Lund University, Geneva etc). Not 100% if this is the path I will go down but optimistic that it is an option. Not heard back from the Open Society Foundation yet but we still have half of June to go so fingers crossed there'.

The Our Porirua newsletter for June was sent out at the end of last week. If you didn't receive a copy, please let the webmaster know and she will add your name to the list of subscribers.

It's likely that there will be one or two events being organised by Mana Zonta that you may like to take advantage of. You can find them in their July newsletter.  Mana_Zonta_July_newsletter_2019

Allan informed members that a contract has been signed for the Men's Shed (three big sheds and quite a bit of equipment, in fact) at Kenepuru Hospital and an opening day has been planned for Saturday 4 August.

The good news is that Tania Woodcock is home and recovering well from her surgery, Terrie Turner can now walk much further and can sometimes be out and about when visitors call, Allan Nichols is recovering well from cataract surgery, and Wendy will be home on 13 July following a hip replacement and visitors will be very welcome while she is unable to drive. .

Phil Currie has notified us that, due to conflicting priorities, he is unable to meet his commitments to Rotary and has reluctantly resigned. He thanks the club and wishes members well in future fundraising efforts. Ron Lucas has also notified us that he will be resigning.

At a Rotary District Conference in Spokane, Washington, USA, Bill Gates thanked Rotarians for their leadership and dedication to eradicate Polio from the planet. He was just a few months old when the first polio vaccine was developed in 1955. Now the American philanthropist is at the forefront with Rotary in the fight against Polio. 'Never, never, never give up. So long as Rotary members continue to believe that - so long as we never give up - then polio does not stand a chance'.

STOP PRESS: The correct time for District Changeover on Sunday 7 July is 11.45 am for midday until 2.00 pm, not as previously notified.

A reminder to get your tickets for the Wellington Forum 2019 on Thursday 4 July 2019.

On 9 July, Chris Durno, Z's Strategy Manager, will be talking to us about Z's strategy of meeting NZ energy and fuel needs and transition to a zero carbon world.

You can find information about future events here.

Phillip Reidy gave us a quote from George Bernard Shaw, 'The biggest problem with communication is the illusion that it has happened'. 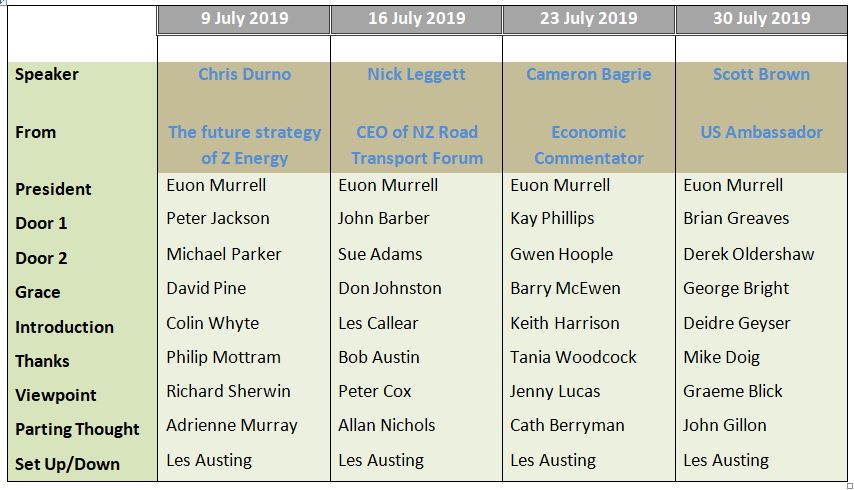