Gallipoli with an Assisted Mobility Pass

I’m going to cover not only Gallipoli but also aspects of Turkey which I saw during our Gallipoli-focussed tour. Turkey is about three times the size of New Zealand. The total population is about 80 million, 14 million of which live in Istanbul.

My interest in Gallipoli stemmed from my father’s WW1 involvements. He enlisted as a gunner at the very start of WW1 at the age of 19. He went first to occupy German West Samoa, then to Egypt and Gallipoli and then to the Western Front, returning home in 1919. He was gassed, but suffered no wounds. His only physical injury was to break a leg while playing rugby. 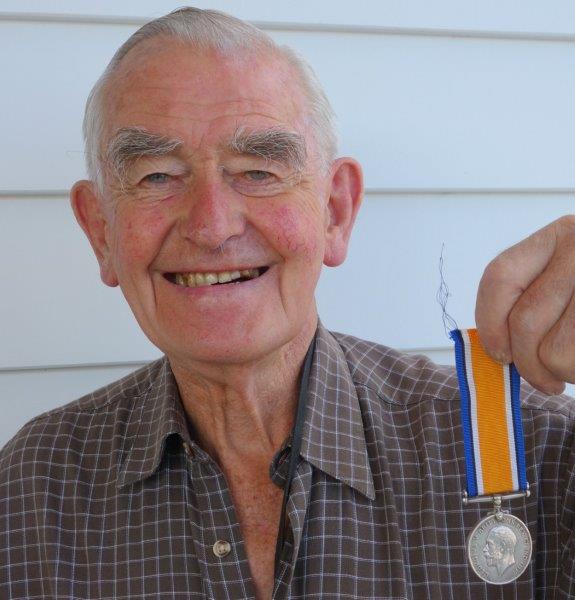 As with many returnees, he never spoke about WW1. However, not long before he died, he gave one of his three WW1 Service Medals to each of his three grandchildren (my children). They were aged 6-10 at that time and not surprisingly, one of the medals became misplaced. You may have read in Kapi Mana news how that medal came back to my family from Perth. 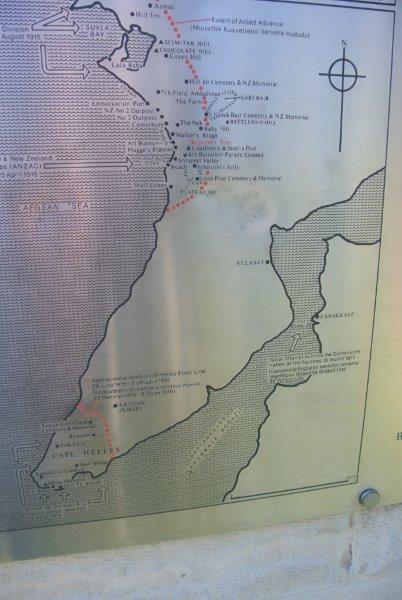 Late last year, before the return of the medal, the possibility of my attending the Gallipoli centenary was developing. My son, Lachlan, who lives in Sydney, had put his and my names in the ballot for places at the ceremonies. We had good credentials through my father (Lachlan’s grandfather) but in fact very few descendants were awarded places in the first two ballots. Instead the Prime Minister announced that the great majority would be open to all New Zealanders. (The Aussies did it much better, with many places being preferentially filled with direct descendants). Then, in October, Lachlan won a place in the third ballot. Would I come with him as his ‘entitled other person’? Of course, yes!

In parallel with this, Lachlan had learned that the House of Travel were running a tour focussed on Gallipoli and would I book for the two of us through House of Travel, Johnsonville – within the next day - if we were to be eligible to be included in the New Zealand quota at the Anzac Ceremonies? Because of site constraints, this was limited to 2,000 from NZ, 8,000 from Australia plus 500 VIPS – 10,500 in all. 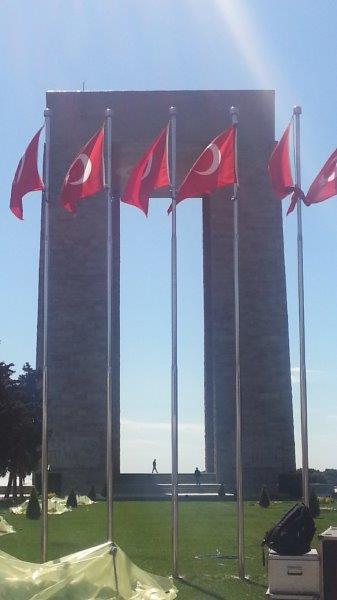 So, quite suddenly, it was all happening. Accepted in the ballot, booked on an 11-day tour to Turkey – Istanbul briefly, then several days in the Gallipoli vicinity, visiting numerous battle sites and cemeteries, then the Anzac Day commemorative services with Lachlan and me wearing my father’s WW1 and WW2 medals. Also, two side trips to the ruins of Troy (a flourishing city 3,500 years ago) and to Assos (where Aristotle had an academy 2,300 years ago).

In March we received official acceptance within the New Zealand quota and a 24-page booklet giving very detailed instructions on the Anzac Day commemorations. And, quite essential for me, an Assisted Mobility Pass. Without the Pass I could not have managed the demanding nature of parts of the commemorations – notably walking 6km on an uneven track including a 300m ascent. Fit people had to walk whereas the aged and infirm (like me) had Mobility Passes which entitled us to climb that track by bus. Lachlan got a pass too to enable him to look after me. There were five of us over 80.

About that time we also received from the House of Travel some information on the day by day activities on the tour.

We flew to Istanbul, arriving early in the morning of Sunday 19 April. We were among the early arrivals with the tour proper starting on Monday morning. So we had all of Sunday to do our own thing around Istanbul, visiting sites not included in the tour. 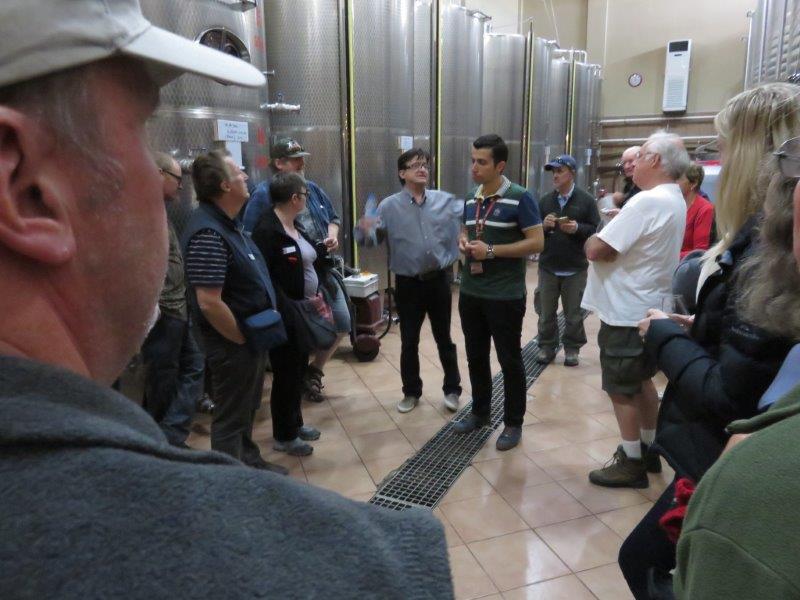 Now is a good time to explain the structure of the tour. There were 103 tour members – that’s three full buses. Although set up by the House of Travel in New Zealand, in Turkey the tour was run for them by the Australian based tour company APT. We had with us three New Zealand academic historians and two local Turkish guides. Between them all we had almost continuous commentary on the buses and on the tour sites and some evenings. The first two nights were at the Grand Hyatt Hotel in Istanbul, the 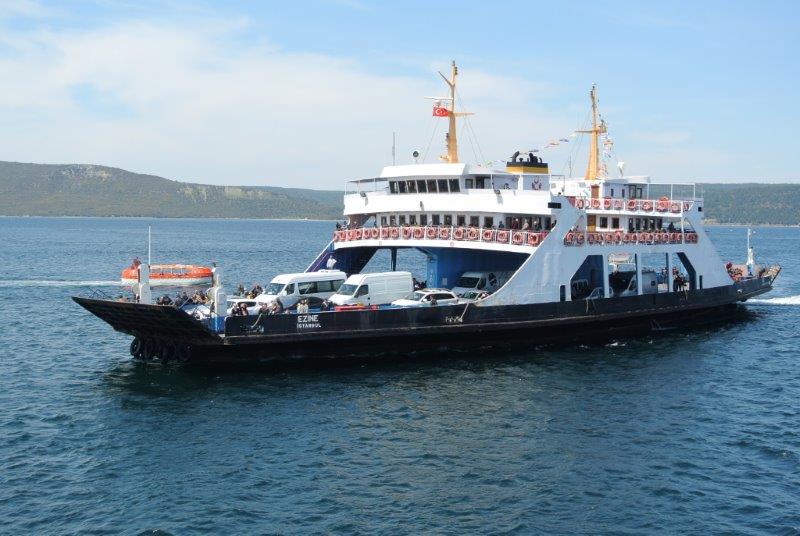 day between touring in Istanbul. Then to the Gallipoli area by bus, staying four nights at Assos. Then a last night back at the Grand Hyatt, Istanbul. All exceptionally well organised.

Because of the size of the tour party and there being only smallish towns in the Gallipoli area, the closest accommodation to Gallipoli was at Assos, 2 hours away from Gallipoli – by bus ferry across the Dardanelles, then 1½ hours to Assos. This meant 4 hours per day to get to and from Gallipoli from Assos. Hence, 6am breakfast, 7am start, back to Assos between 8-10pm at night. Long days! 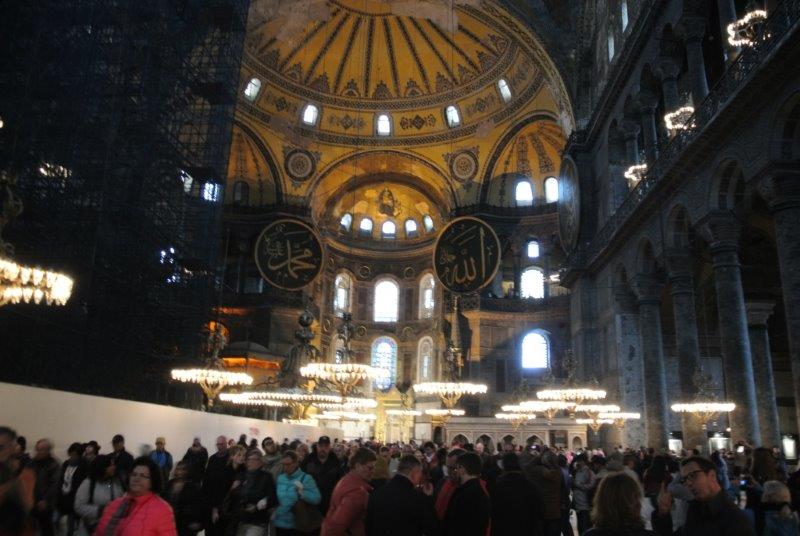 We focussed on two features in Istanbul, the Hajia Sofia church and the Cistern. Both are major attractions for tourists and locals with lengthy queues for admission. Both were built

about 500-600 AD and are hugely impressive. The Hajia Sofia dome provided the largest enclosed space in the world until the 1500s. Many of its interior mosaics remain in good condition and their artistry is superb. The Hajia Sofia was the headquarters of the Orthodox Church until Constantinople was captured by the Ottomans in 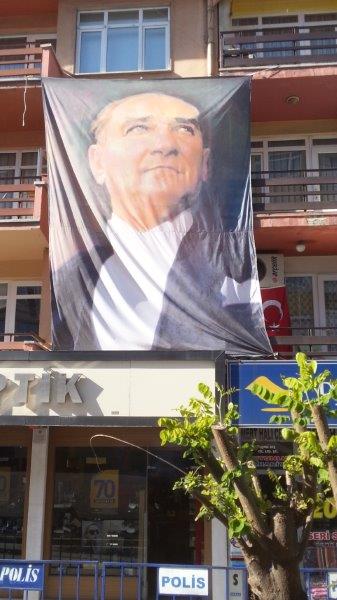 1453 when it was converted to a mosque. In 1934 Kemal Ataturk (the founder of modern Turkey) established it in its present secular role as a museum.

The Cistern stored 80,000 m³ of water for central Constantinople. It was roofed over with supporting columns, 9m tall and had an area of 1½ football fields. Water came to the Cistern from streams up to 18km away, partly by aqueducts, one of which still remains today, intact but unused. 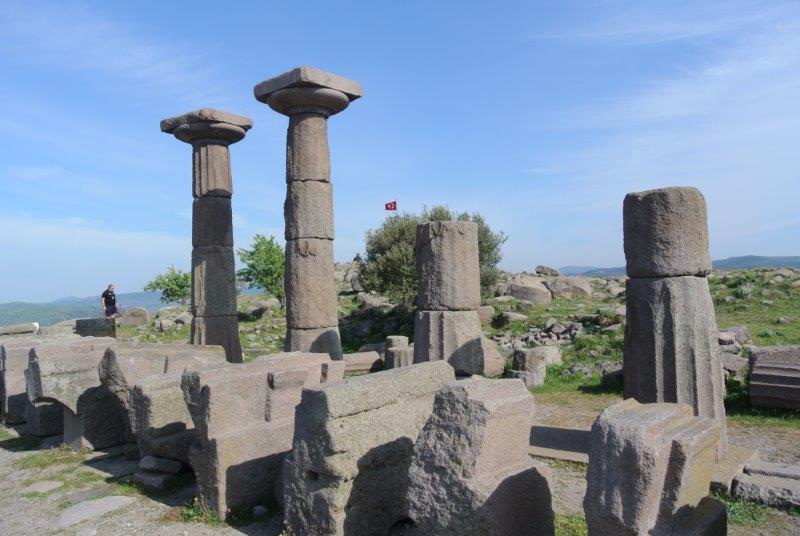 On the Monday, the tour started in earnest. The group spent the day sightseeing around Istanbul. Tuesday morning we left for Gallipoli where we did our first battlefield visit. We finished the day at Assos where we were to spend 4 nights.

Over the time before Anzac Day we spent 3 days learning about the Gallipoli area, including visit to 6 battlefield sites, 3 major memorials and more than 30 cemeteries.

Leading up to the Dawn Ceremony we spent the night in the open. There was appropriate big screen entertainment and no-one got

much sleep. The last attendees didn’t arrive until after midnight, by which time those on the grass became increasingly congested. We, with the Disability Passes, were on tiered seating but even that got pretty hard by the end of the night. After the Dawn Ceremony the Australians moved to the Lone Pine Cemetery for their commemoration services and the Kiwis moved further on to Chunuk Bair for theirs. After the services, 400 buses moved people from the sites, some waiting for up to 4 hours. Eventually we got back to Assos for the fairly early start – this time to travel back to Istanbul with a visit to a winery and lunch en route. 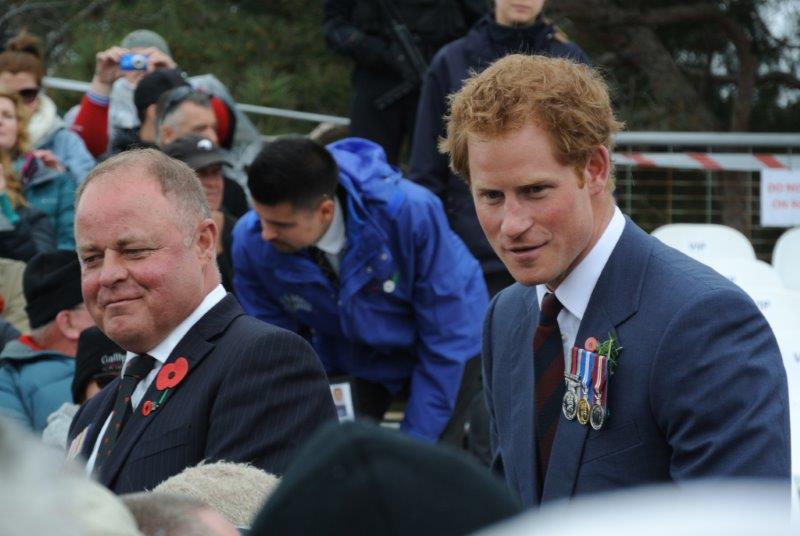 As well as the expected VIPS at Chunuk Bair (Prince Charles, Prince Harry, John Key, etc.) there was an old (my age) Turkish guy. The previous day we had met him in a 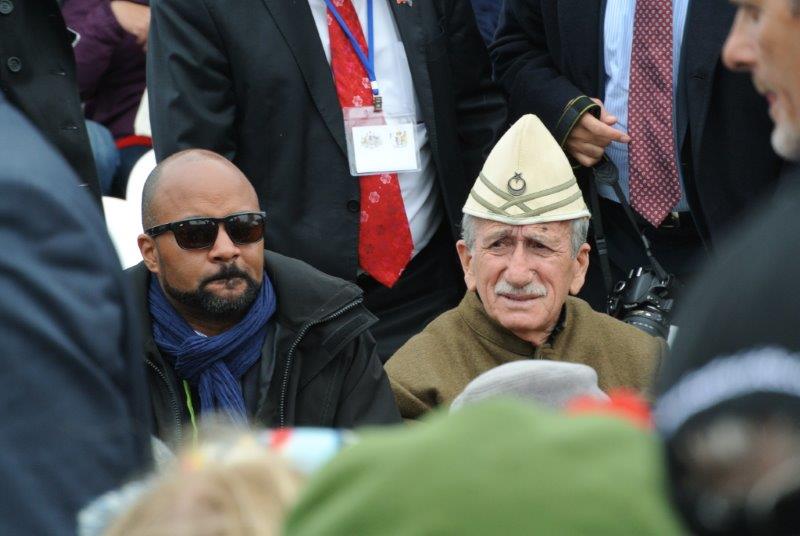 café in one of the small Gallipoli towns where we learned that his father had been the last remaining one of the Turkish defending troops and he was (I think) the last of the following generation. In the café, he was quite a character, but I don’t know what gained him his place with the New Zealand VIPs.

The tour finished after breakfast the next morning (Monday) with tour members being delivered to the airport or other onward transport.

Lachlan’s and my flight was not until midnight so we again had all day in Istanbul. I’ll briefly sum up that day, perhaps amplifying points which I missed on the way through. 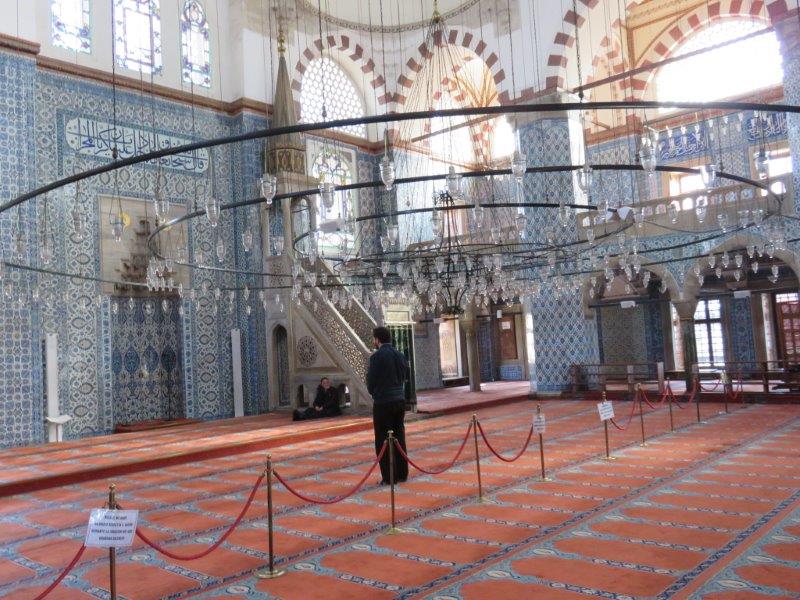 We visited two further mosques (shoes off respectfully at the door). In each case the whole floor was carpeted – not just prayer mats. There were taps outside for washing 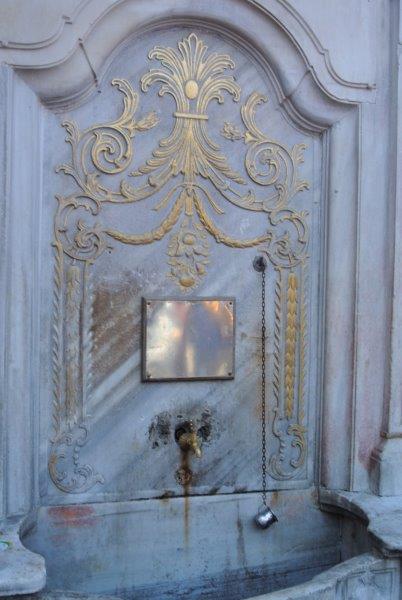 One was the Blue Mosque. It is comparable in size to the Hajia Sofia but built about 1,100 years later.

The other mosque was relatively small, very tiled and built in the 1500s. There were books at the entrance for anyone wishing to extend their knowledge of Islam.

Several times during the day there were calls to prayer from the mosque minarets. These days the muezzins have it easy with electrically amplified speakers. 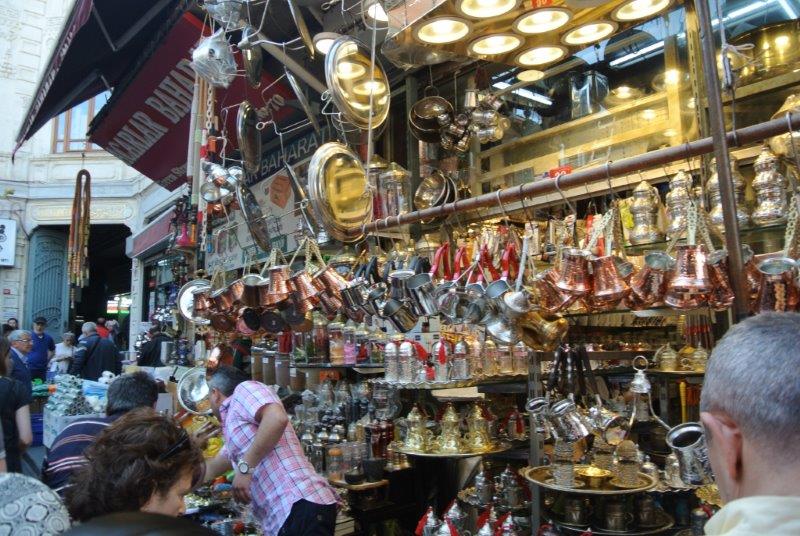 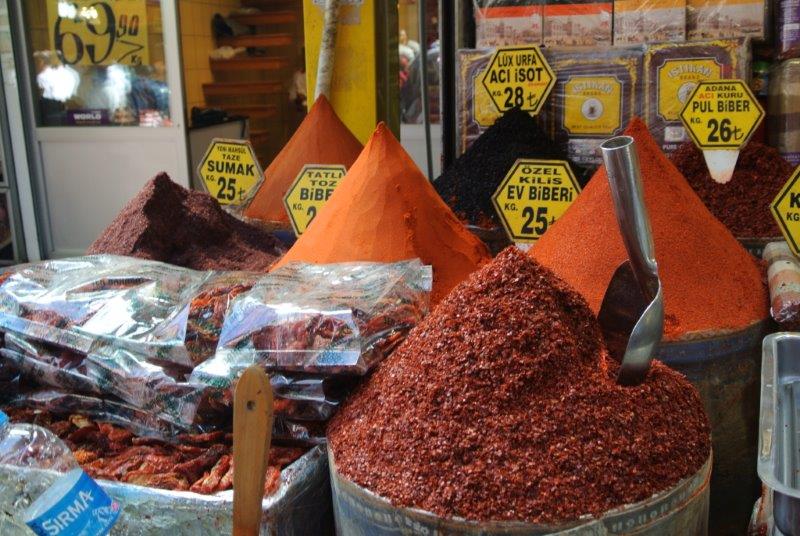 The spice market is relatively small and frequented mostly by locals. Very densely packed with customers.

Modern parts of the city are spacious and clean with lots of tulips in the many parks and gardens.

Traffic is very dense and moves quickly, taking opportunities which we wouldn’t dream of here. We didn’t see any accidents.

In Istanbul, major buildings over 500 years old are not uncommon, giving a sense of age which we don’t find in New Zealand.

To finally sum up on the Gallipoli theatre of war.

There was first a failed allied naval attempt to break through to the Black Sea. This was followed up by landing ground forces. The NZ / Australian troops were, by error, landed at what came to be known as Anzac Cove. The terrain there was very comparable to the coast road between Pukerua Bay and Paekakariki, steep and high, ascending to over 900 feet above sea level and covered in dense 10-foot high scrub.

Blame for the error is still debated. 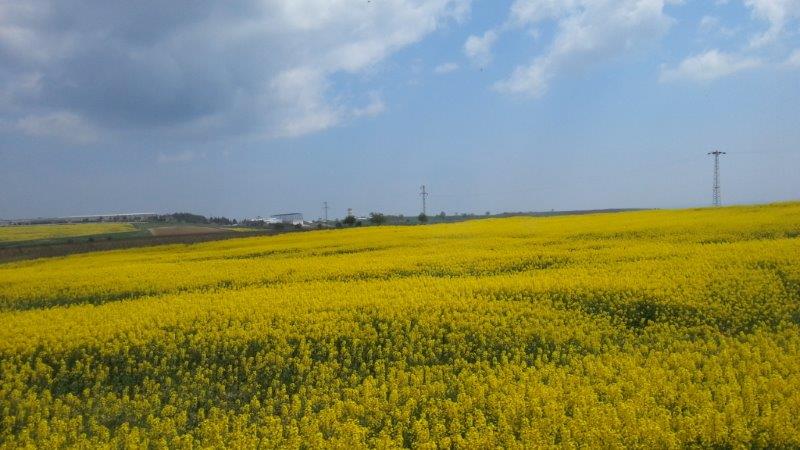 A mile or so either side from this ridiculous site were easy beaches with low, undulating country inland, much of it farmed as you can see from these photos. 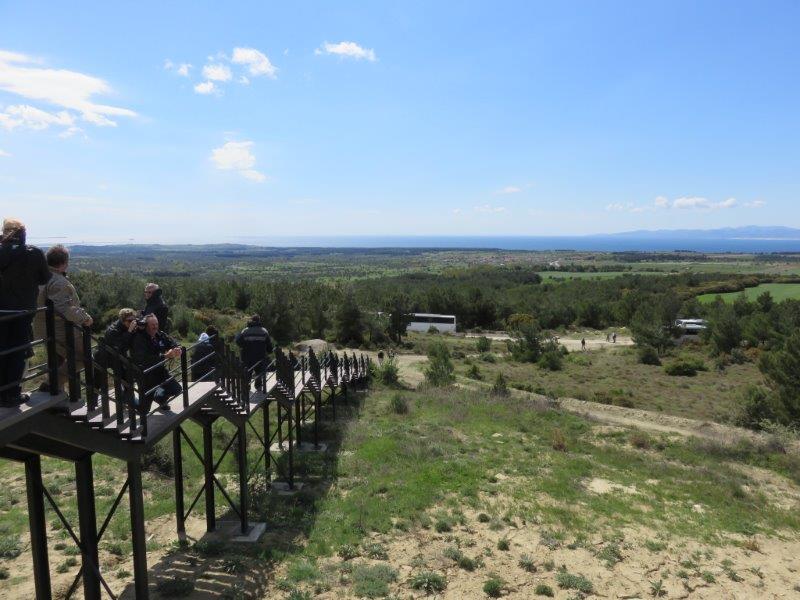 The British Empire and allies deployed 470,000 men during the 8.5 month campaign.

If you want to read about it, the definitive book on the New Zealand involvement is Christopher Pugsley’s ‘Gallipoli’. I read it before the trip. It is a compilation of reports, plus letters from participants, with continuity text by Pugsley. 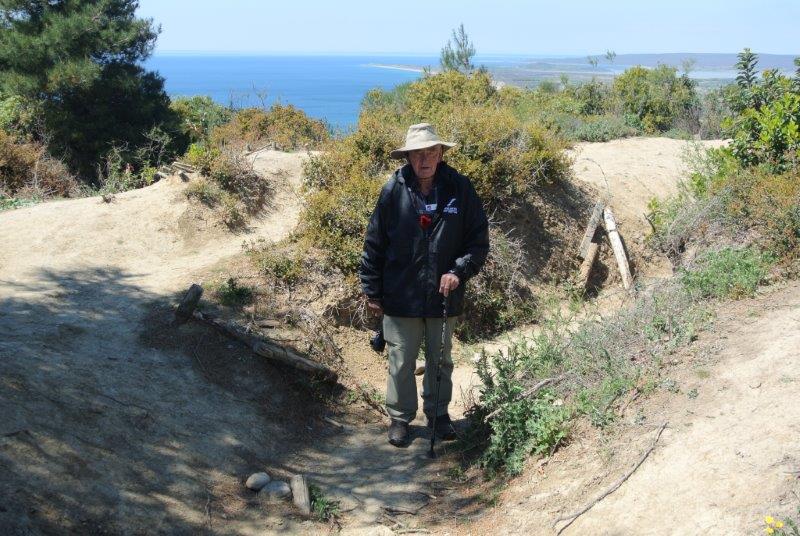 This is an example of typical trenches. Many were so shallow that you had to stoop to keep your head below the line of fire. Also the two sides were often very close to one another. Pugsley’s book reports an encounter between the two sides who, by night, had entered the same trench from opposite ends, and fought in the dark with bayonets. In this, or some similar instance, bodies were left lying 4 deep in the bottom of the trench.

Before going to Gallipoli I had thought of it as pretty bad. But after seeing for myself the trenches, the terrain and the cemeteries and reading Pugsley’s book, it became to me awful beyond belief. No wonder my father, in common with many Gallipoli returnees, never talked about it.

But I’m helluva pleased to have now been there and seen it for myself.

+ Text Size -
Do NOT follow this link or you will be banned from the site! Original generation time 1.7639 seconds.