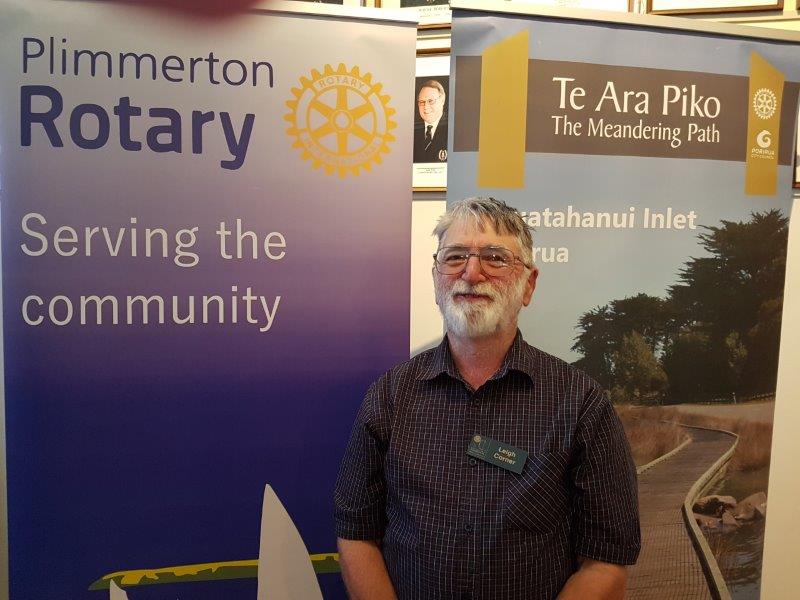 Members of Plimmerton Rotary Club had the privilege on 28th February of hearing from someone who not only holds a Masters degree in Veterinary Science, but is also a Veterinary Epidemiologist. Such a man is Club member Leigh Corner.

Dr Corner has a particular interest in eradicating tuberculosis from animals. “We’ve found that in order to obtain accurate research results about how TB affects animals, it is necessary to study whole populations of a particular species rather than just a small number of individual animals. Only by testing large numbers can we get an accurate picture of the effects of the disease.”

There were synergies between veterinary science for animals and medical science for humans. “A recent example of this is the Interferon-gamma Test. This test was originally created by veterinary scientists to solve a problem of TB testing wild bush cattle in Northern Australia, and I can say that I had a part in its invention.

“In fact this is the first new test for TB in animals or humans since the 1880’s.”

The new test could be used to complement the Mantoux test for TB in humans and the Tuberculin Skin Test (TST) in animals. The test had been enthusiastically adopted for the diagnosis of TB in cattle in many parts of the world and adapted to diagnose TB in humans. “The Mantoux test and the TST in animals involves an injection into the skin, and a second visit three days later, whereas the Interferon test is a simple blood test: one visit, one blood sample.”

Dr Corner mentioned the BCG vaccine which had been used for many years around the world for protecting children for TB. “In 1908 a veterinarian and a physician in France began a project to see if they could create a vaccine for use in people. They took TB from a cow and re-cultured it in a laboratory 230 times over a 13 year period. By 1921 they had succeeded in adapting the characteristics of the vaccine so that it could no longer cause disease but could be used in animals and humans to protect against TB.”

Every year about 100 million children around the world were successfully vaccinated with BCG, which was 80% effective in children. In recent decades BCG had been shown to be very effective in animals as well, in cattle, deer, possums and badgers. Other species of animals, both domesticated and wild, harboured TB and the protective effect of BCG vaccine was currently being investigated.

Dr Corner was particularly interested in the use of BCG where TB affected species of animals facing extinction. “An example is the Liberian Lynx which is found only on the Liberian peninsula (comprising most of Spain and Portugal). There are less than 100 of these beautiful animals left and TB is threatening the last remnants. Another threatened species is the Wood Bison in Canada, where numbers are down to under 3000.

“There is no doubt in my mind that there is a strong connection between the health of humans, the health of animals, and the health of the environment generally. All three are closely intermingled.”

TB or not TB, that is the question
+ Text Size -
Do NOT follow this link or you will be banned from the site! Original generation time 1.6694 seconds.