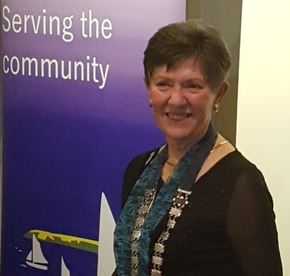 Incoming President, Jenny Lucas thanked Peter and Alison for leading the club for the past twelve months.

World President of Rotary International, Ian Riseley from Australia, had chosen for his Theme for 2017-2018, ROTARY – MAKING A DIFFERENCE and Jenny said that she felt honoured and privileged to serve as president, with this theme.  She realised that she needed the support of all members who would be led by the new board who she called forward to receive their theme badges.

Jenny would be the 45th President of the Rotary Club of Plimmerton and said she was honoured to wear the chain with the names of the 44 presidents before her, two of whom had a special connection to her. 'Plimmerton Rotary', she said, 'is a wonderful club – the friendliness is palpable, the buzz in here each Tuesday is almost deafening'.

She laid out some of her plans for her year of ROTARY: MAKING A DIFFERENCE such as continuing with several existing club projects like Te Ara Piko, the various speech contests, the Leadership Awards, the Garden Trail, the Book Fair, etc. She quoted from a former headmistress from her schooldays who said, 'We build on the achievements of the past, but we do not rest on them'.

She outlined some new projects, like Playable Porirua - a shared project with Inner Wheel. Another project on RI President Ian’s wish list is to plant a tree for every Rotarian in the world and she didn't think this would be difficult to achieve as we were already talking to people in Council to select an appropriate site.

There were other things that she would like to see happen in her year. At the Inner Wheel Changeover some new joint initiatives were mentioned with Mana Zonta, Plimmerton Inner Wheel and Plimmerton Rotary planning to collaborate on fund-raising projects and events in our city, to make a difference, and support our charities. Jenny said she wanted to see continued collaboration with Porirua City Council. 'I believe we have a unique relationship', she said. 'We have two Memoranda of Understanding with them, one for Te Ara Piko and the other for Playable Porirua'.

Jenny went on to say that she would like to have more involvement with our colleges and schools and felt we could work together with some of the incredible principals in our city to make a difference. She was sure we could use strong young people to help with the projects like the Book Fair and the Inlet clean-up, while at the same time helping them by making them aware of Rotary programmes that could benefit them, such as the Rotary Youth Leadership Awards, The Rotary Youth Programme of Enrichment, forming an Interact club, the National Science and Technology Forum and International Youth Exchange. She said that project focus groups would be set up for specific projects, such as was done with Te Ara Piko. Members with particular skills or interests would be identified to participate in certain projects, and she was thinking particularly of a possible new event at Battle Hill. The new committees would not have hard and fast boundaries, and some members would be wearing more than one hat. She said she would like to see a team go to Taveuni Island in Fiji, to help with rebuilding teachers’ accommodations and to improve their water collection systems,  and a team was already working on grant applications to get the funds that would be needed.

Jenny concluded by saying that she would like the club to work on being a 'future focused' club with the formation of a satellite club to encourage more younger members. But most of all, she said, 'I want our Rotary club to continue being fun and effective. We will continue to make a difference within our community and promote the International theme of ROTARY: MAKING A DIFFERENCE'.

President Jenny's thoughts for the future
+ Text Size -
Do NOT follow this link or you will be banned from the site! Original generation time 2.2089 seconds. Cache Loaded in: 0.0405 seconds.