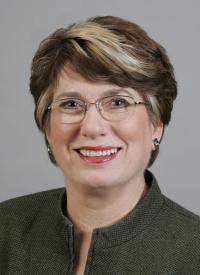 Hon Fran Wilde CNZM QSO has held a number of leadership positions in business and politics. She is currently Chair of the Greater Wellington Regional Council and also chair of the Local Government New Zealand Regional Sector Group, which comprises of Chairs and CEOs of all regional councils in New Zealand. Fran is a company director and has her own consultancy business, Fran Wilde & Associates Ltd.

In politics Fran has been MP for Wellington Central, a Minister in the Labour Government of the 1980s and Mayor of Wellington. Leadership positions in business have included CEO of the New Zealand Trade Development Board, Chair of Wellington Waterfront Ltd and of Housing New Zealand Ltd, and director of a number of listed and privately held companies.

In many of her leadership positions Fran has been an effective change manager and in Wellington, in particular, has a legacy of successful initiatives. Fran is active in the philanthropic and community sectors. She has an honorary doctorate from Victoria University of Wellington and is a Fellow of the NZIM.

Combining Wellington Region’s nine existing Councils into one is definitely the right way forward for everyone in the region, according to Greater Wellington Regional Council Chair Fran Wilde, who spoke at Plimmerton Rotary on 26 August 2014.

A former Minister of Tourism, and Mayor of Wellington in the 1990’s, Ms Wilde spoke passionately about the future of the region she clearly loves. “We are a small region compared with Auckland. Every week members of the Auckland Council have a formal meeting with senior Government officials to discuss issues of the day. Here in Wellington we hardly ever have a meeting with Government officials, and the reason is that we are too fragmented. We have 9 Councils serving 500,000 people.”

There were some disturbing megatrends emerging that would severely affect the Wellington region in the future. Statistics NZ had estimated that between 2006 and 2031 the total population in the Wellington region would increase by 16%. However, the increase in those aged between 25 and 64 was expected to be just 9%, while the number over age 65 would double in the same period.

“To put this another way, the number of people in our work force is declining as a percentage of our population, while the number of elderly is increasing dramatically. Further to this, there is a major trend for people to move away from smaller centres to larger centres.”

Another trend was that there would be more “big weather” in the future which would in turn mean more weather-related damage in our region. In addition there was a steady increase in the number of insect and bird pests in the region which would become more costly to control.

“All of these trends will create more pressure on rates revenue in our region. Where is the additional funding going to come from in the future? We have to be better organised and more efficient in the Wellington region so that Central Government will see us as a region they are prepared to support. At the moment the amalgamated Auckland Council seems to get all the support and attention.”

The Local Government Commission was currently reviewing submissions from all Councils in the local area and would shortly present their recommendations on a way forward. It was likely they would recommend having a number of local Boards with members drawn from the local community, each with its own Chair, and with legal protections as to how much funding would be available for each local community (likely to be around 25% of rates collected in that region) and how those funds could be spent.

There would be a single Wellington Council with one Mayor for the region. Ratepayers throughout the region would pay just one lot of rates rather than paying rates to the council and to the regional council.

Ms Wilde hoped that the matter would be finalised in time to be put to local voters at the 2016 local body elections. If passed by a simple majority of voters, there would be a phase in period before the new Wellington Council took over. “But given that in a survey we commissioned, 67% of people in our region wanted the Basin Reserve Flyover to proceed, it’s by no means a foregone conclusion, even though it’s the only sensible way forward.” 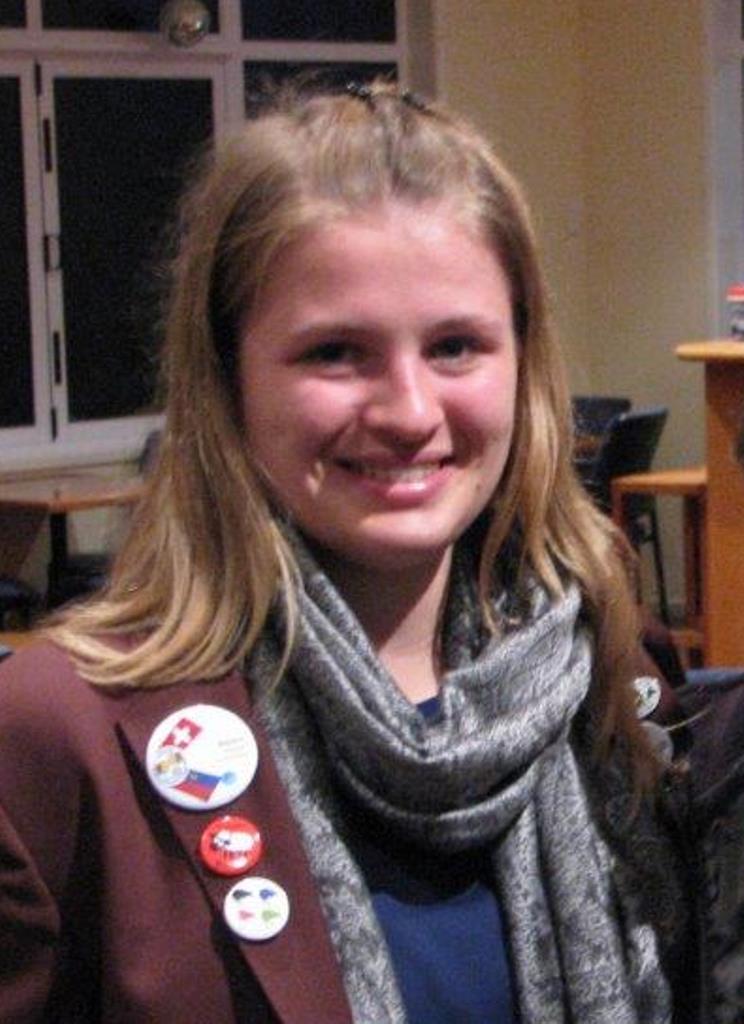 Describing her home country of Switzerland as a land of chocolate, cheese and scenery, 16 year old  Rotary Exchange student Jessica Nüssel gave her first presentation to Plimmerton Rotary on 26 August.

In fluent English (her native language is German) Jessica explained that she was born near Munich and when she was a young child the family moved to Switzerland because work prospects for her parents were better there. Her mother is a professional writer and her father manages a textile firm. The family settled in the small town of Hagendorf, population 5000. Jessica has one brother aged 14.

While here in Wellington, Jessica is attending Aotea College. At home she attends a school which could hold the world record for the length of its name – Alte Kantonsschuleaarau – where she studies a total of 12 subjects. This is probably double the number of subjects studied by most NZ students.

Jessica’s interests include sport, particularly volleyball, as well as cooking, baking, music – she plays the saxaphone - and, more unusually, she loves creating complex robots using Lego and electronic components. A robot she helped to build recently won a major competition in Switzerland.

While in NZ, Jessica wants to learn all she can about New Zealand, its people and its culture. By doing so she will mirror the central aim of the Rotary Youth Exchange programme which is to foster international peace and understanding.

Next week is Quiz Evening and it is a supper night. There will be no buffet dinner so have a light meal before you come.The quiz will commence at 7.30pm and the bar will be open from 6.30pm. Supper will be put out on tables during the course of the evening.

The Quiz masters will be Graeme Blick and David Knight.The questions will be NZ General Knowledge on various topics (there will be no Rotary questions). We will be joined by Quiz teams from Porirua Sundown, Zonta and Inner Wheel.

Wives/Partners of Rotarians attending who have not yet  registered with Inner Wheel will be rung to confirm numbers.

Grant a Wish - to Tairangi School: The wish granted to Tairangi School was for a sound system for their school hall. President Chris and Donna Gemaries went along to make the presentation and experienced to new sound system being put to good use. Children aged 5-12 years were all very confident to stand in front of a hall of approx 300 people to share the fruits of their study.The children were split into groups and each child in each group got a chance to speak. Some spoke of “Water” and how we use it, some recited poems they had written and they covered various other topics along with much cultural based singing and dancing. The school is very grateful to receive this sound system which will benefit all the students.

Gigatown:  What is Gigatown? The purpose of the Gigatown competition is to bring three years of fast, affordable broadband to the winning town. We want that place to be Porirua – in order to create jobs and hi-tech careers for our community and particularly our young people. The win will help to transform our economy, learning and lifestyles – which will have positive flow-on effects across the lower North Island.

How do I do the Quiz to earn points? Please complete the Quiz Masterclass series online. Here’s how:

1.Join-up as a Porirua supporter at www.gigatown.co.nz  You will receive an email from Gigatown. Open the email and click the Verify link and select Porirua as the town you support. [Can’t find the email? Check if the email has gone to your junk mail – if it has, you’ll need to drag it back to your Inbox for the verify link to work.]

2. Once you’ve joined up, then Sign-in at www.gigatown.co.nz

3. Hit the Quiz Masterclass icon – and answer all questions correctly to earn the bonus points – and find the answers by clicking the link under each question. This is an educational quiz about digital technology, so you’re unlikely to know the answers in advance.

4.For your chance to WIN 3 prizes of 10 Peanut Slabs – complete the current Quiz by midnight 29 Aug and send an email confirmation to arose@pcc.govt.nz with “Quiz” in the subject line and the name of your workplace. 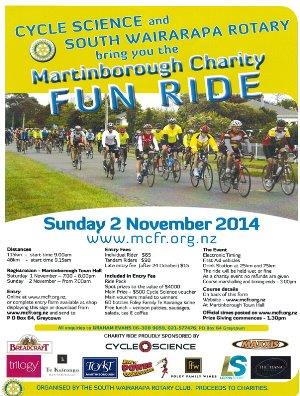 Milton Rotary and the Otago Youth Adventure Trust, have for many years taken independent tramping groups on many of our 'Great Walks', and other tracks. Read more about trips for the next season here

Routeburn/Kepler or Kepler, another combination of 2 classic kiwi tramps—March 17-23 or  join the Kepler leg of this tramp from March 19-23.

Day Trips from a Lodge Base:

+ Text Size -
Do NOT follow this link or you will be banned from the site! Original generation time 1.9335 seconds.