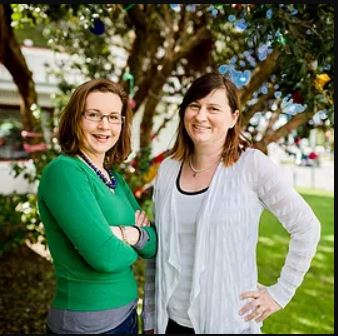 Two weeks ago we had a talk by the two founders of ‘Little Sprouts’, who provide baby packs to needy families. To start with, they focussed on families in Porirua but since then the charity has spread its wings to other parts of the country.

Last evening we heard a remarkably similar story. Kim Murray and Rebecca Morahan are two local women who identified a different need in Porirua: some mothers, or other family members, need to be coached to help them feed their families properly.

Kim and Rebecca started ‘WELLFed’ in 2016 with eight volunteers and offered their services to families with children at decile 1 schools in Porirua East. Many of these families need help to assemble cooking equipment and basic ingredients, understand simple recipes, and in some cases find out about locally available fruit and vegetables.

Free cooking classes are held every week, attended mostly by women, but there are men and teenagers involved too. Rebecca stressed the intangible benefits they are noticing: greater confidence, willingness to try new experiences, and better social skills. This spills over into improved literacy, numeracy and willingness to learn.

WELLFed now has 50 volunteers and has delivered 102 cooking classes and 14 block courses to 200 families. Porirua City Council has been supportive and has provided a large building in Hampshire Street, where Kim and Rebecca will teach their classes and start a community garden.

Rebecca has plans to spread the WELLFed model nationwide, starting in Hamilton.

The club could help these enthusiastic young women in various ways, which will be taken up in the Community Committee.