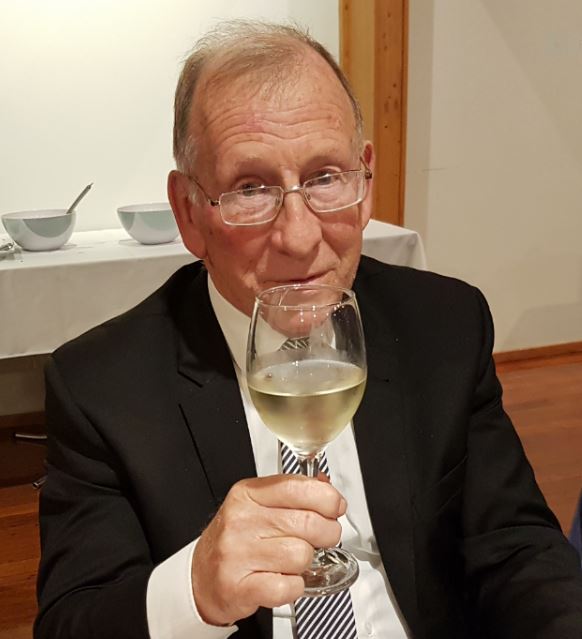 Members of Plimmerton Rotary were privileged to hear from Wellington Regional Council Chair Chris Laidlaw at their meeting on 24 April.

To describe Mr Laidlaw’s CV as impressive would be a gross understatement. A former All Black captain and half-back in the 1960’s, he is a Rhodes Scholar through being selected as “an outstanding student”. He has served as an MP, Regional Councillor, High Commissioner to Africa, and Race Relations Conciliator.

Mr Laidlaw explained that the main purpose of the Regional Council was to manage core services throughout the Wellington region such as water supply, electricity and transport. He described Wellington’s transport system as being convoluted and a nightmare to manage. “The main issue is the fragmented ownership of these services. For example, in the transport sector, the railway lines are owned by NZ Rail but the rolling stock is owned by an overseas company. Then you have all the overhead electricity services and signals which have another owner. The buses are owned by other companies.”

A major role for the Regional Council, perhaps its primary role, was to build resilience in the Greater Wellington region in case of a major weather event or earthquake. “Everyone is more nervous these days, and with good reason: insurance companies, property owners, business owners, service providers, and councils. The legal issues are especially challenging.”

There was a growing realisation that the people of Wellington and of New Zealand had been too complacent for too long. “New Zealand is a clean green land with a small population. Why should we be concerned? But this attitude is completely wrong. We are vulnerable in this region to flooding, erosion, and degradation of our soils and water supply. Our resources must be carefully managed.”

Mr Laidlaw explained what he believed was planet Earth’s highest risk factor going forward. “We are all going to be affected more and more by the warming of our oceans, which will result in the generation of ever more violent storms around the world. These, in turn, will have a severe effect on coastal communities in particular.”

Already the value of properties in some low-lying areas of the region being adversely affected. “Seawalls are only effective for so long. Sooner or later the sea will find its way around the walls and come ashore in a different place.”

For earthquake protection, there had been major advances in base isolation technology for new commercial buildings, but this was not 100% effective in the event of a major shake. Modern technology had also enabled early warning systems to be developed. “At best, these systems will give up to five minutes warning of a major earthquake.”

On a more positive note, Mr Laidlaw urged his audience to ensure they had an adequate supply of water and warm clothing at home. “We sense that there is a growing move towards local communities coming together in tough times and helping each other out.”

Asked whether he would rather have played rugby in the 1960’s or the present day, Mr Laidlaw observed that in his day there were injuries but these were relatively minor. “Nowadays the speed of the game is so much faster and players smash into each other with more force than when we were playing. I wouldn’t be surprised if helmets are compulsory soon for all players.”