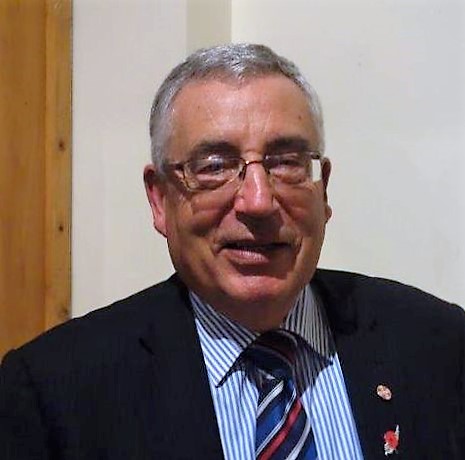 In what little spare time Mr Day has, he is also involved in a Rotary sponsored charity called ROMAC, Rotary Oceania Medical Aid for Children. He explained to club members the extraordinary work ROMAC does in this part of the world.

ROMAC funds operations performed by a team of four NZ based paediatric surgeons, for children from the Pacific Islands, Timor-Leste, and elsewhere in our region. Mr Day showed photos of children who had received surgery which transformed not only their lives but also the lives of their families. “The medical conditions the team has treated include severe burns, disfiguring facial tumours, and also internal deformities which would have prevented these kids from leading normal lives if their conditions hadn’t been corrected.”

In one case the surgeons operated on a little boy who had an enormous tumour growing in the region of his stomach. “As you can see from the photos, the poor little chap was blown up like a balloon, but after a short operation the team was able to remove the tumour completely.”

Mr Day paid tribute to the surgeons who performed the delicate operations, led by Brendon Bowkett of Wellington. “Without the generous support of people like you here at Plimmerton Rotary, ROMAC just couldn’t carry out its precious work. On behalf of all the kids whose lives are being transformed, thank you Plimmerton Rotary!”

Partners Evening
The speaker on May 3 is Matthew Hooton, political commentator. Matthew is an excellent and entertaining speaker.

Letter from Jessica
Dear Rotary Club of Plimmerton
It has been a while now that I am back in Switzerland and many things have happened. I am very well and my family too. My parents are working and my brother and I we are still going to school. We have hosted a guy from Columbia for 4 months and it was a great experience.
Here is just a short overview on what has happened in my life: The school year is almost over and the last exams are coming up. I have been able to reach most of my goals and I am working on those that have not been achieved. There are still 11 weeks to do so. And after the summer break the first exams for my graduation will take place. In the meanwhile I have to write a research paper about a chosen topic. This is going to be a biological topic with a focus on body cells.
I learnt about body and cancer cells when I took part in a medical study week at the University of Geneva in March. The participants were given a topic and were able to do the research in the laboratories of the University. I have learnt so much during this week and I was inspired by the speech of a professor at the closing ceremony. Dr. Nicola Harris from Upper Hut was speaking about how she became a scientist and what difficulties she had to overcome. She is now living in Switzerland but can still remember how it felt to leave New Zealand behind. It was inspiring to talk to her and it shows us how small this planet actually is.
Before I end this letter, I like to ask something. I have a friend who is the most dedicated fan of Lord of the Rings and his goal is to visit all the places in New Zealand. He will fly over in late December 2016. Unfortunately the friend he is travelling with will join him a month later. Now he came to me to get some advice for his travels. He would be really keen to work during the time from late December 2016 to late January 2017. So my question is, if anyone of you needs two helping hands during this time on the farm or any other job or if anyone of you knows anybody who might be interested in two helping hands? He is a really good guy and I would not ask you if I am not convinced that he is a reliable and honest man of 19 years. Please contact me if you have an idea or offer. Thank you very much!
I am sending you my and my family best wishes and all the best for the next time. Jess