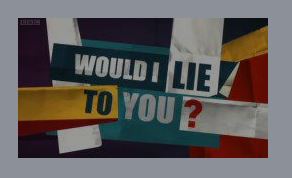 Last evening our weekly meeting was about Fellowship, and Kay Phillips organised a fundraiser based on the panel game “Would I lie to you?”*.

Five club members were asked to tell a story about a possession, or object, and the rest of us had to judge whether the account was true or a lie.

Nick Walmsley brought along a small wooden camel, claiming it had been bought in the middle east under risky circumstances, and Ann Scannel passed around a rock from Ecuador. Brian Greaves had eaten guinea pig in Peru, or so he said, and Bob Austin broke ranks and described how he had finagled his way into the Hokitika Rotary Club.

Finally, Mike Scott told a lengthy story about a moth-eaten squash racket which he claimed had belonged to a former world champion.

On each occasion the club was divided as to the truth of the stories, which meant a good deal of money was collected.

A fun evening and thanks go to Kay, Nick, Ann, Brian, Bob, and Mike.

Now, did I ever tell you about the time I got a phone call from the Duke of Edinburgh…?