After contributing to the international Polio Plus programme and hearing about the Rotary initiatives to rid the world of Polio, a group of 20 Rotarians and partners from District 9940, four members from the Rotary Club of Plimmerton visited India in January 2009 to experience first-hand a National Immunisation Day (NID). The group worked with local Rotoracters and UNICEF teams to cover an area in the slums of Firozabad, 50km southeast of Agra.

Due to huge international efforts, Polio today is endemic in only three countries - Pakistan, Nigeria and Afghanistan. When our Rotary group visited India, the region of Uttar Pradesh (where we volunteered) accounted for 40% of India’s 874 cases in 2007 or 25% of cases world-wide. 80% of India’s cases occurred in Muslim communities, with the barriers to immunisation being religion, culture and beliefs.

The usual manner in which NIDs are organised is to hold a rally through the target area late in the afternoon before the NIDs. We wore yellow vests and red caps and set off walking behind with an Indian man on a rickshaw with a loudspeaker announcing the immunisation days to follow.

Two of the taller men in our group held up the banner and the rest of us distributed lots of yellow leaflets.

It was fascinating walking through the slums, past homes, shops and workplaces and hearing the call to prayer from the Muslim temple at 6.00 p.m.  Lots of children followed us around and one particular lad seemed to be assigned to look after me and make sure I kept up with the group.

On the Immunisation days we left our bus on the main road and travelled by various means - tuk tuk, motorbike or walking - deeper into the slums to the clinics, where nurses and doctors were vaccinating and immunising the children and the pregnant women. We were in groups of four with several Rotoracters and a Unicef volunteer. After helping briefly in the clinic we set off to visit the homes of families who had refused to have their children vaccinated. The actual presence of foreigners has big impact and a highlight was one mother who had initially refused to have her children vaccinated, but later turned up at the clinic for the nurse to do it. We gave polio drops to many babies some just one day old, accompanied all the while by a noisy parade of children.

The conditions we witnessed were unbelievable; filth and rubbish, animals everywhere, men sitting about, women washing clothes on the footpath, some workshops where groups of both men and women were painting and decorating glass bangles. There were street vendors pushing carts selling vegetables and other provisions, men riding bicycles, women in rickshaws and lots of children. 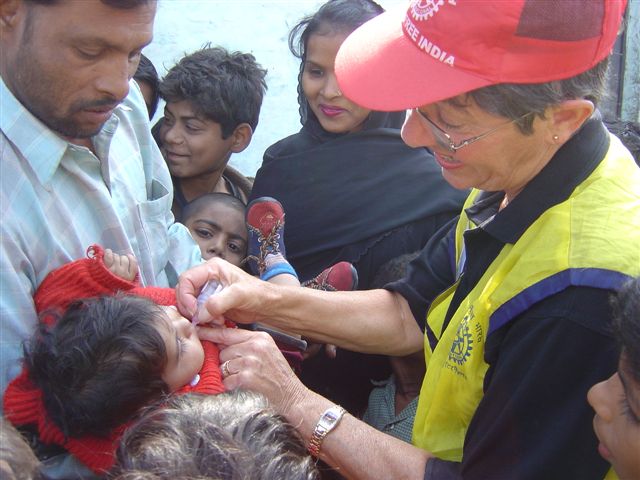 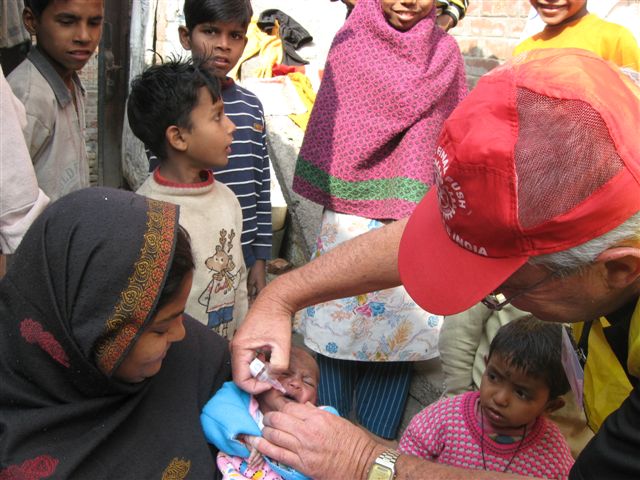 Amongst all this apparent bedlam, we all managed to immunise countless children. Here I am immunising one baby while our President, Ron Lucas, immunised another.

Thanks to the efforts of our group and others like us, Polio has been eradicated in India.

The fight to end polio is led by the Global Polio Eradication Initiative, which includes Rotary International, UNICEF, the U.S. Centers for Disease Control and Prevention, the World Health Organization, the Bill & Melinda Gates Foundation and governments of the world, with the support of many others around the globe.

Editor's note April 2014: After 25 years of hard work, Rotary and its partners are on the brink of eradicating this tenacious disease, but a strong push is needed now to root it out once and for all. It is a window of opportunity of historic proportions.

Reaching the ultimate goal of a polio-free world presents ongoing challenges, not the least of which is a hundreds of million dollar funding gap. Of course, Rotary alone can't fill this gap, but continued Rotarian advocacy for government support can help enormously.

As long as polio threatens even one child anywhere in the world, children everywhere remain at risk. The stakes are that high.

Eliminating Polio in India
+ Text Size -
Do NOT follow this link or you will be banned from the site! Original generation time 1.7739 seconds. Cache Loaded in: 0.0268 seconds.