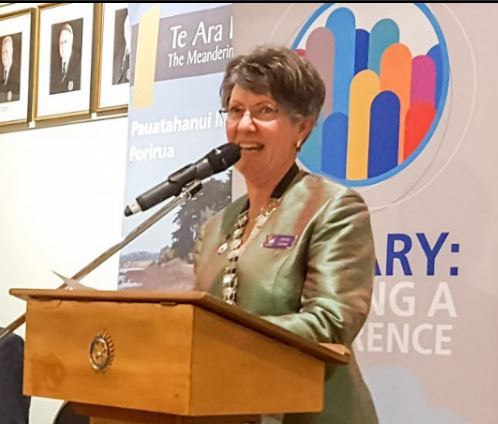 In her final speech, outgoing President, Jenny Lucas, thanked everyone for supporting her. She has really appreciated the encouragement and help during the year. Whilst she said her biggest thanks must go to her Board members, Jenny also thanked her husband, Ron, for his support, all the committees, the club members who quietly undertook the weekly meeting tasks, our website contributors, Amandine, our French Exchange student, and all those who supported her, and the many members of the Club who have contributed to a myriad of achievements.

At this point, Jenny presented the President’s Award to Bill McAulay and announced that Bill is President Nominee for the 2020-2021 year.

About to sign out as our club president, Jenny said it had been an to serve. She said the year helped to build her confidence and to grow as a person. She recalled this time a year ago and how nervous and anxious she was and admitted those emotions had only diminished a little bit.

Before inducting Donna Reed as the 2018-2019 President of the Rotary Club of Plimmerton, Jenny finished her speech with a quote from Pooh Bear:
“When you wake up in the morning, Pooh," said Piglet "what's the first thing you say to yourself?"
"What's for breakfast?" said Pooh. "What do you say, Piglet?"
"I say, I wonder what's going to happen exciting today?" said Piglet.
Pooh nodded thoughtfully. "It's the same thing," he said.