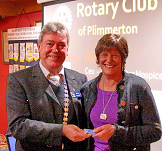 The Club meeting commenced with the induction of Cath Berryman, proposed and introduced by Sue Adams who gave a short biography of Cath’s background.  We have great pleasure in welcoming Cath as a member of the Rotary Club of Plimmerton.  She will make our club stronger by adding her skills, experience and enthusiasm.

Our guest speaker was Ria Earp from Mary Potter Hospice who has held a number of senior or management positions in the public sector across a range of agencies: Maori Affairs, Internal Affairs, Te Puni Kokiri, Youth Affairs, Women's Affairs, and the Ministry of Health. Ria held the position of Deputy Director-General, Maori Health with the Ministry of Health for nine years from 1996 - 2006.

A Matter of Life and Death

One of Wellington’s best known and respected institutions can trace its origins to a Catholic Order of Nuns called the Little Company of Mary. This order established a branch in Wellington in the 1930’s, creating Calvary Hospital (now Wakefield Hospital) through which they ministered to the vulnerable, the elderly, the poor, and the dying. They decided to support the establishment of a separate facility to cater for the terminally ill and their families. One Nun in particular gave generously of her time and arranged for a substantial grant to create the new facility. The year was 1939 and the Nun’s name was Mary Potter.

Speaking at Plimmerton Rotary on 8th July, the CEO of Mary Potter Hospice Ria Earp spoke with great compassion about the extraordinarily important work that the Hospice carried out every day. “We touch so many lives, from Wellington City, through the Porirua Region to the Kapiti Coast. We have just 18 beds at the hospice in Newtown, but every day of the year we supply care and support to an average of 250 people. This is up from a daily average of 150 people eight years ago.”

“To manage this workload we coordinate the efforts of a large number of different specialists. Besides our own doctors and nurses we work in with occupational therapists, pharmacists, physiotherapists, massage therapists, spiritual carers, plus several other types of specialists, as well as our many willing volunteers. We have strong partnerships with other health related entities such as Wellington Free Ambulance, training and education providers, as well as GP’s and their nurses.”

Ms Earp noted the dramatically increasing number of people over the age of 85. “This age group will expand rapidly in the future, placing more and more pressure on our limited resources.”

The annual budget for Mary Potter Hospice was currently running at about $10 million. “We receive about half of this from Central Government. Their grant used to cover 70% of our costs but the grant has remained static while demand for our services has risen, and so now the grant covers only about 50%.”

Other sources of revenue included the eight Mary Potter stores that had been set up in the region. The concept was that people could donate household goods to these stores, which then sold the goods to the public. In the last financial year the stores had generated net profit of about $1.3 million. The balance of funds that were needed to run Mary Potter came from donations from organisations and individuals.

In thanking Plimmerton Rotary most sincerely for its generous donation of $7500, raised at the club’s recent Charity Breakfast with the Prime Minister, Ms Earp noted that the Hospice would in future be reaching out to many other service clubs and similar organisations as a way of seeking the funds they so desperately needed.

On a sobering note, Ms Earp invited her audience to have a serious think, with their families, about the sort of care they themselves would like to have if they became terminally ill. It was always a good idea for everyone to have something planned in advance should this situation arise.

Guess who's coming for Wine and Cheese

Thanks to all those who put their names down for our new wine & cheese gatherings.  This promises to be a great way to socialise with other members. The first get together will be on Sunday 20th July. We will need about 4 hosts. Please let us know if you want to volunteer to host first. Those involved will be rung on the day and told where they are going. It is not too late to be involved. Email Chris Garrett to confirm your interest leegarrett53@hotmail.com

Recent  raffles & sergeant sessions have raised approximately $400  which will go generally towards costs associated  with the Exchange Student and Schools Grant a Wish Project.

Thanks to the Inner Wheel members who attended last night’s meeting. The good turnout added to the success of the evening.