Around the World in 50 Minutes

New Zealand has a bright future as long as businesses of all types, especially those that export, are encouraged to flourish. This is the view of Phil O’Reilly, CEO of Business New Zealand, which is the foremost advocacy group for NZ businesses.

Speaking at Plimmerton Rotary on 22 July, Mr O’Reilly first acknowledged the significant help he had received when, as a teenager, he attended a Rotary RYLA (Rotary Youth Leadership Award) course. The learnings from this course and the contacts he had made, continued to be of help to him in his business life. He also acknowledged the presence at the meeting of a large contingent from Mana Lions Club, noting that his Dad had been a Lions Club member.

In an entertaining and enthusiastic address Mr O’Reilly, who travels frequently, took attendees on a tiki tour of the world, offering brief snapshots of the economic situation in various regions. He described the overall global scene as lumpy, mixed, and with uneven levels of confidence. The UK was bouncing back remarkably well from the Global Financial Crisis, through rediscovering the power of its major brands such as Landrover and Rolls Royce. It was placing less emphasis on European markets and had gone back to its roots of being an international trading nation.

Germany was in a strong position but needed to address its growing need for energy. Since the Japanese tsunami and nuclear disaster, all of Germany’s nuclear power plants had been shut down. Gas piped in from Russia was becoming increasingly important. Germany’s core strength lay in its SME (small to medium sized enterprise) sector.

Conversely, France was not in good shape. The Hollande government was deeply out of favour and the country seemed to have lost its way. Italy and Greece continued to have major problems.

Turning to the USA, Mr O’Reilly noted that sustainable growth seemed to have returned, but this was despite the politicians rather than because of the politicians. He saw major issues ahead in the political arena, with President Obama’s popularity continuing to slide while the views of the Republicans seemed more extreme than ever.

Looking at Asia, the China story was remarkable. “In the last 30 to 40 years the Chinese Government has succeeded in raising more people out of poverty than has ever been accomplished before by any nation in the world.” Economic activity in China was now focused internally rather than externally, as the Government sought to improve living standards further.

In Japan, a slogan to raise that country’s status on the world stage was being promoted by Prime Minister Abe as he travelled abroad: “Japan is back!” This was a reference at China and South Korea, which to a large extent had overtaken Japan in the region. Japan’s Government debt was 200% of GDP (compared with New Zealand’s 30%), and Japan’s population was ageing rapidly. The average age of Japanese farmers was 70, while the average land area per farm was just one hectare.

Mr O’Reilly saw South America as having enormous potential for future growth. Regarding the Arab Gulf States, he noted that NZ was well regarded by the Governments in that region. “They like us because we have very low corruption, we are a safe country, and we talk with them, not at them”.

Turning closer to home, Mr O’Reilly noted that Australia had not weathered the GFC at all well. “They fell harder because they were so reliant on their mining sector, which in turn was reliant on China. Here in NZ, we make food so we were far less affected. But we need Australia to recover sooner rather than later because they are our largest market.”

Finally Mr O’Reilly commented on the scene in NZ. “Our exporting companies are led by real entrepreneurs who aren’t afraid to take calculated risks and to try new ways of doing things. Our terms of trade are currently the best they’ve been in 40 years and in the last quarter, purchases of plant and equipment were at their highest levels ever. New Zealand’s ranking in the OECD has risen 4 places in the last 10 years. As long as successive Governments find ways to make it easier for businesses to operate, then this will be very good news for every New Zealander”. 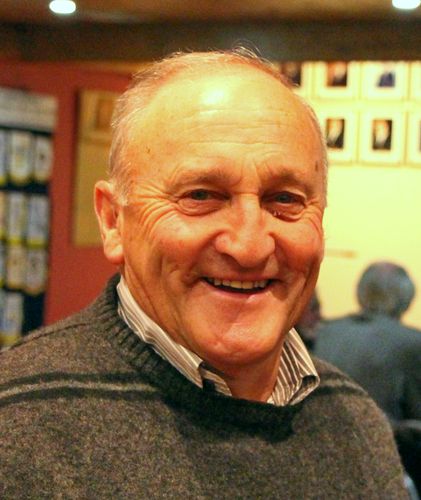 Joint Sergeants' Session: There was a lively and entertaining joint sergeant session by

our Sergeant Peter Cox and Lion Tamer Stu Bryant which, in conjunction with the shrapnel collection, netted $273. This went towards an overall donation of $513 for the Food Bank.  Thank you to all those who made contributions.

We are looking for applications from students who will be in year 13 in 2015 and either attend a Porirua city school or are resident in Porirua city. Click here for more information.

Forest and Bird have asked that club members take part in this season's plantings at Pauatahanui Wildlife Reserve. The club has been involved several times in the past and our efforts have contributed to F & B's progress in restoring full coverage with locally occurring native plants. The work is ongoing. Angus asks that we do our bit againthis weekend. Details are:

Future Hosting: Graeme Blick informed members there will be a Friendship Exchange from New York State early next year. There was a good show of hands for offers of hosting our guests.

Next week's Guest Speaker on 29 July: Steven Sanderson - Chief Executive Officer of Wellington International Airport. Steve joined Wellington Airport in February 2012. Prior to joining WIAL, he was the CEO for Queenstown Airport for 5 years. His career background is predominantly in infrastructure businesses including airports, ports and electricity. Steve is a keen skier and is always looking for the untracked, otherwise he heads for the moguls.

Partners of Rotarians are invited to attend our next three meetings. A ring around will be done to confirm numbers attending.