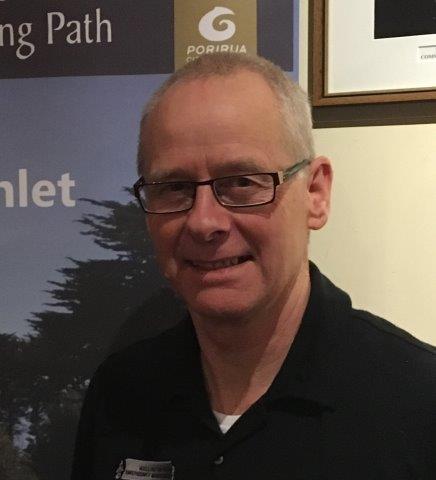 Wellington Region is constantly at risk from extreme weather and from earthquakes. Either of these major events can strike with little or no warning and will cause major havoc in the region. This sobering message was delivered at Plimmerton Rotary’s meeting on 2nd August by Trevor Farmer, area co-ordinator for WREMO, the Wellington Region Emergency Management Office.

Mr Farmer explained the difference between “the big stuff and the smaller stuff” when disaster struck. “It’s WREMO’s job to handle the big stuff: getting resources and logistical support to where they are needed, and co-ordinating disaster relief around the region.

“But please make no mistake: it is your job, every one of you, to handle the smaller stuff.”

By this Mr Farmer meant being prepared at home. First and foremost was the need for an ample supply of water. “In fact, storing 1000 litres of water would not be overdoing it. You can’t do much at home without water, and Wellington’s water supply will almost certainly be disrupted in a major event.” This was because the sources of the region’s water, located in the hills behind Wainuiomata, the twin lakes north of Upper Hutt, and the underground supply in Petone, were all connected by pipelines to homes and businesses in the region. “Every one of these pipelines crosses a fault line at some point and so chances are the entire system will not function for many weeks after a disaster.”

The other major issue households would face following a disaster would be loss of electricity. “We don’t really think about how important electricity is in our everyday lives. But here again the power could be out for a long time and you need to prepare for this. Make sure you have lots of warm clothing including good footwear you can wear in wet weather. It is extremely important that you keep warm, and also you might have to do a fair amount of walking in the early days or weeks following a major event.”

On toileting matters, Mr Farmer recommended people use what WREMO called the ‘two bucket system’, one for liquids and one for solids. “The idea is that you put a small amount of garden soil in the bottom of each bucket, and then you use one bucket for your liquids and the other for solids, and each time after you’ve finished you sprinkle in more garden soil. The buckets can be emptied by digging a hole and burying the contents.”

By preparing for a sustained loss of water supply and electricity, householders would give themselves the best possible chance to survive a major weather event or earthquake in good shape. For more information please visit www.getprepared.org.nz or  www.wremo@gw.govt.nz

Laurie’s Birthday
Our own young French lass had her 18th Birthday on Monday.  It was celebrated at the club meeting with a cake and special birthday wishes from all members.

District Conference in New Plymouth 21 – 23 April 2017
Peter Cox (237 6642) would like to hear from members who are interested in attending district conference. Accommodation in New Plymouth is filling up fast.

District Governor’s Visit
DG Martin Garcia and Denise will be attending Plimmerton Rotary for the annual visit next week. It is a partners night.

Another Partners Night
Tuesday 30 August is the fifth Tuesday in the month and our speaker is Kathy Gibson, CEO of Special Olympics New Zealand. This organisation offers a year-round programme of sports training and competition for children and adults with intellectual disabilities. To find out more before Kathy visits us click here

UN Youth
Maisy Bentley of Aotea College has been selected as one of 22 students from across New Zealand to be part of the UN Youth NZ Global Development Tour in 2017. The group will be travelling in January around Europe and to New York to learn about global development, international cooperation and the role the United Nations plays in both. Destinations include Paris, New York, London, Geneva, Brussels and Copenhagen. The trip culminates in the delegation representing New Zealand at the 2017 Winter Youth Assembly – an international conference for young people, hosted at the United Nations Headquarters in New York.  To learn more about UN Youth click here

Are you interested in the new initiative on Pest Control?
The Government's new goal of exterminating every rat, stoat, possum and feral cat from New Zealand by 2050 has been described as a "game-changer".  If so you can read more here.

August District Newsletter
Adrienne has just completed the August Newsletter for Martin Garcia. You can read all about this month's news here.

Parting Thought: Life is simple but people make it complicated.