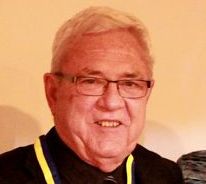 Bob Austin gave us his Viewpoint tonight. And it was a salutory lesson. He said ...

'Tonight, I wish to outline a recent experience.

'To many of you, it will be familiar and to others probably not so.

'It is about Caveat Emptor - let the buyer beware.

'We have had two heat pumps which have given us 22 years of reliable and effective service but unfortunately, their life is at an end. Hence we have decided to replace them.

'We have a preferred brand due to previous impeccable service in another property. MITSUBISHI is the chosen one.

'Onto Google to identify an approved installer. Quite a few were listed and we made our selection.

'I rang the installer for an inspection and quote. We wanted this as the existing units have internal piping which is not readily accessible and are keen to reuse it if possible.

'The installer arrived to check the machines and advised that he was confident he could provide a quote in 12 to 24 hours.

'24 hours passed with no response. I waited for three days, contacted the installer, and was advised that they had been inundated with consumers wanting quotes and it would be emailed to us the following day.

'This was not to be. A further few days passed and I rang the installer and was advised the quote was near to completion and would be emailed the following day.

'The quote was emailed the following day for two Mitsubishi heat pumps. The quote was a little higher than expected and in view of the unscheduled delays in getting the quote to us we decided to get another quote.

'Back to Google and we contacted another installer. He agreed to assess and provide a quote for no charge. It would be in two days and a time was arranged. He rang the day before to reconfirm the inspection time.

'At the inspection, he did similar tests to the previous installer and advised that he would need to consult with Mitsubishi to ensure that the internal piping was suitable. Then he would advise us when the quote would be available.

'He rang the next day and arranged a time to meet to run through the quote and confirmed that he had to make a couple of checks to ensure the existing facility was suitable for the Mitsubishi heat pumps.

'He arrived at the allotted time, completed the checks, and ran through his quote.

Surprise, surprise it was at least a third lower in price and the heat pumps had different model numbers.

'The variation in model numbers and pricing raised questions in our minds.

'We decided to ring Mitsubishi. I explained what had happened and asked for an explanation about the different models quoted.

'Again surprise, surprise, the quoted model numbers for the first quote were not heat pumps supplied by Mitsubishi. The question was how could this be?

'The operator asked, did I have the quote available. Which I did.

'I confirmed that it was on Mitsubishi letterhead.

'The operator asked was there any other notice under 'Mitsubishi' and I confirmed that it stated 'Heavy Industries'.

'The operator confirmed that that was not Mitsubishi.

'The operator then asked about the model numbers for the second quote and confirmed that they were top of the range Mitsubishi heat pumps.

'So the moral of the story is let the buyer beware. If in doubt, do the research as all may not be as it seems.'