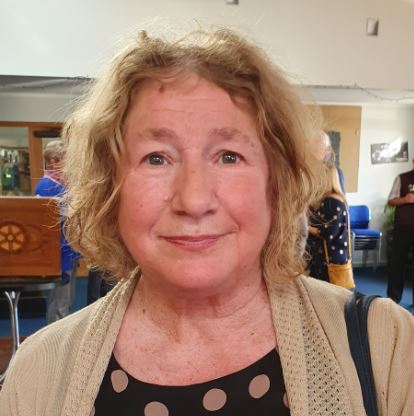 Ann Scannell revealed some of 'The Person behind the Badge' tonight, She said,

'It appears I have been chosen to this week tell you all about me. Now, one thing about me is that I always think negative thoughts before I get around to thinking positive thoughts, so my first thought on seeing my name on the roster was ‘I don’t want to do that’, but it is OK because my second thought was ‘ just get on and do it’.

'I was born in 1952 and spent the first 8 years of my life in Auckland. When I was 8 my family (mum, dad, me and my two brothers) moved to Wanganui (no h, my Dad taught me it was pronounced Wanganui not Whanganui) which is where my father grew up and his mother before him. My mother was Auckland-born and bred so did not want to move, but as my father had had a massive heart attack 2 years before he wanted a slower pace of life, so move we all did.

'One of my memories of Auckland is the beautiful white sand beaches, such as Takapuna, fringed with pohutukawa trees, followed by the intense pain of sunburn after we had spent all day there. No sunscreen in those days! I also enjoyed visits to the zoo and (I hate to now confess it) watching the chimpanzees' tea party and riding the elephant.

'Wanganui was also a great place to grow up with its hot, dry summers and cold frosty winters but I never did get used to the black iron sand beaches. It was a great place to go on extended bike rides (no gears then of course so if the hill was steep it was 'get off and push'). It was also much closer to the mountains than Auckland was and I fell in love with snow!

'By the time I was 18 I was ready for freedom from the rules of my parents and I moved to Wellington to attend Victoria University. I initially enrolled in a double Arts degree majoring in both Mathematics and Philosophy. Despite having found Mathematics very easy all my life I suddenly found I was no longer enjoying it so after 2 years I dropped the Maths and completed my degree majoring in Philosophy alone. I also studied geology for 2 years having always been interested in rocks and in landforms.

'After completing a B.A. degree (that could equally have been a B.Sc. for the subjects I had taken) I attended Secondary Teachers College in Auckland for a year. Oh, the humidity…… A simple walk around the block resulted in the need for a long cold shower!! And to think I had lived here as a child!

'Sometime during that year one of my flatmates introduced me to a friend of his and I was quite impressed! Now, I had done quite a bit of tramping as part of the Duke of Edinburgh scheme while at school so when I got invited to join the two of them on a 9-day tramping trip in Fiordland I eagerly said ‘yes’. To this day I am sure I was told that:

'Let me tell you, while there were tacks and huts on the first half of the tramp along the Hollyford, when we got to the Pike section there were neither. We had to bash our way through thick bush and one day when the valley sides were too steep, float down a glacial river all day. The guys actually sometimes had their feet on the river bed but I am shorter!

'Despite all this, I ended up eventually marrying the ‘friend of the flatmate’ and went with him on dozens more tramps throughout the country. But our children could never quite understand my obsession with needing to always read at least two accounts of whichever tramp my husband had lined up for our holidays to confirm that a track actually existed. The huts were no longer important as we (well not actually me) carried tents.

'I became a Secondary teacher in mathematics and geography and later taught science and agriculture as well at The Correspondence School.

'In 1977 my husband and I bought 100 acres (40 hectares) of hill country land on the Paekakariki Hill Rd (it was steep and it was cheap) and built a house and raised our three children there.

'When the youngest child was 10 we began tramping again in earnest and went on at least 2 family tramps a year. It is wonderful to now see our son going on an annual tramping trip with his young daughters.

'Our younger daughter has taken tramping to the extreme. She has already walked the length of the South Island on the Te Aroha Trail and has walked the Pacific Crest Trail in the United States from the Mexican border in the south to the Canadian border in the north which took her 4 ½ months. This year she hopes to return to the States and do another mammoth walk. I usually stop worrying about her after the first couple of months.

'Fast forward to the present. I am now a widow and retired. I spend my time gardening, sewing, going on gentle walks, and playing with my four granddaughters.

'Hopefully one day soon I will get to travel the world again'.