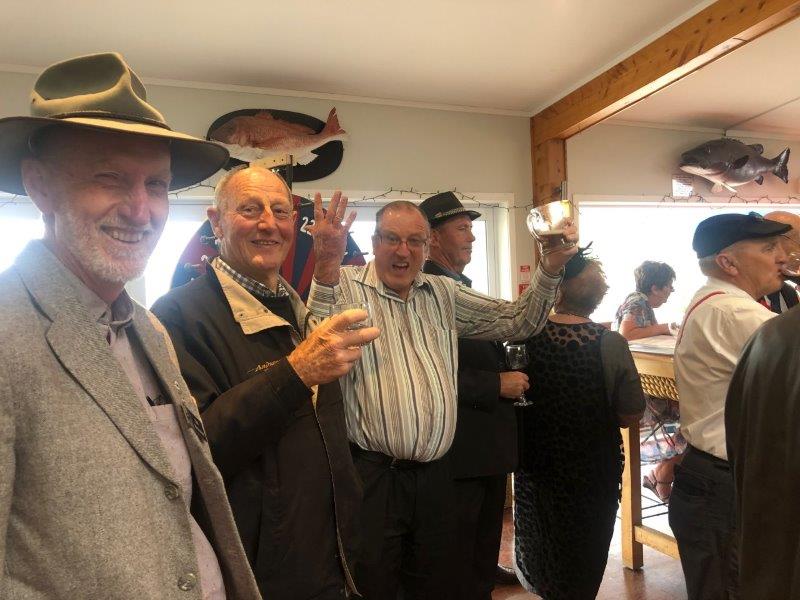 'I walked into a room buzzing with conversation and bonhomie. The mood had been set with Allan Nichols spinning the Jenny (Wheel of Fortune) as people queued for tickets. There was also a queue at the table where sweepstake tickets for the Melbourne Cup were being drawn and purchased amid much angst about whether each number was the winning one. Groups of people milled around in groups indulging in scintillating conversations. Mana Cruising Club members mingled with the Plimmerton and Tawa Rotary Clubs.

'Apart from the usual Rotary garb, many people had made the effort to dress appropriately for this auspicious occasion. Fascinating headwear adorned the women while the men looked dapper in their various hats and suits. 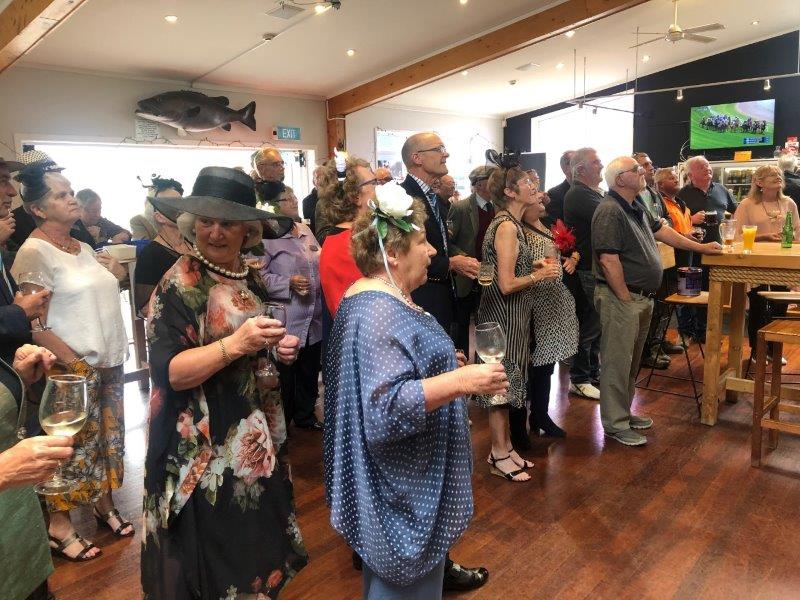 'Finally five o’clock arrived and we all stood glued to the big screen for THE RACE. And what a cracker it was! Liz and I knew when our horse led the pace on the first back straight that it had gone out far too early but others watched with huge anticipation as their horses jostled for position; jostled being the operative word as the second place-getter was relegated to fourth by the stewards later. Vow and Declare was a close head in front and a worthy winner with his associates absolutely over the moon. Winners of the sweepstake were too many to mention individually.

'And that was that. The Cup was over for another year. The Spinning Jenny was re-activated as were the conversations. 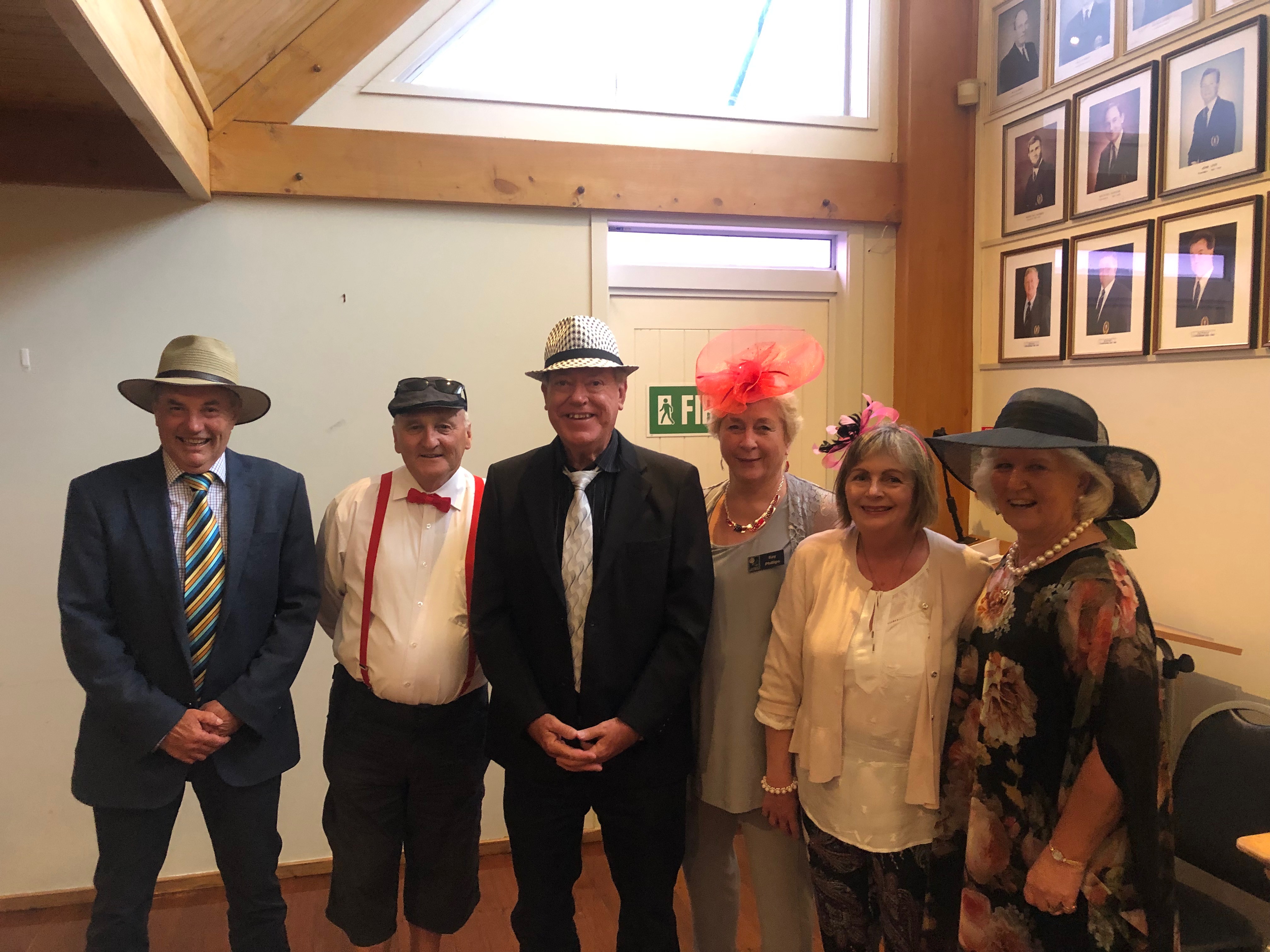 'After the usual welcomes and thanks by President Euon, he announced the winners of the Best Fascinator and the best dressed man. Richard Sherwin was bitterly disappointed that his fascinator was not a winner and Peter Cox, “elegantly” dressed as a Swiss mountaineer was sure he should have received a prize and not just an Honourable Mention.

'Dinner was served for 65 people before the next main event began. 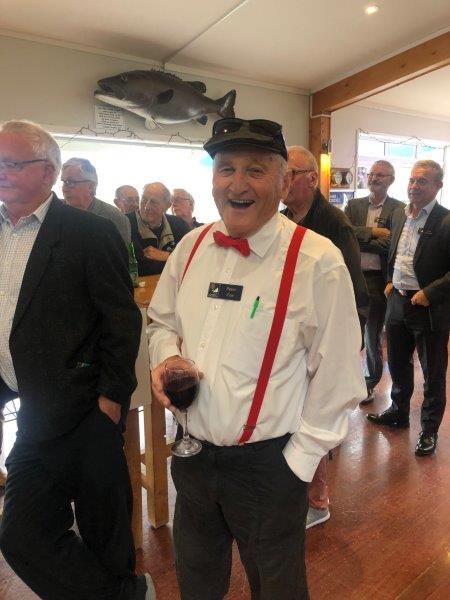 'An absolutely Plimmerton-Rotary-version of Tell the Truth was both entertaining and clever. Panelists Allan Nichols, Bruce Couch and David Pine vied for the best put-downs of their fellow panellists while trying to convince us that their version of the meaning of the word presented was the correct one. The audience struggled somewhat with Allan’s accent so it was reassuring to hear Barbara inform us all, that she can never understand him either. Compère Peter Cox had a flamboyant but clever style of introduction including just as many jibes as the panellists. The three words he presented for the men were:

'Is it a small quantity of leftovers as Allan would have us believe? Or the smallest antelope in the world that Bruce compellingly supported with many facts, or a type of Scotch thistle such as David, as a child, had to help his father eliminate from their Deep South farm?

'The choices were a dog now free of worms, confusing language, or calculate. Given the amount of discombobulation that comprised each panellist’s explanation, the meaning seemed, to me at least, pretty obvious.

'After many puns and oblique references, the panellists would variously have had us believe that nudiustertian meant either a full range of kitchen equipment (including some incomprehensible association with the town of Uster in Switzerland); a variety of nasturtium like those seen growing in gardens locally; or a person, of whom there are many in New Zealand apparently, who object to nudism.

'It fell to President Euon in his summing up of our Melbourne Cup Extravaganza to provide the correct meaning: a rare and perhaps obsolete word meaning the day before yesterday.

'I am already looking forward to next year’s Melbourne Cup meeting.'