A Time of Celebration and Recognition

Tuesday 27 and Wednesday 28 May will be remembered as a time of celebration and recognition for the Rotary Club of Plimmerton and Te Ara Piko, The Meandering Path.  After many years of planning, consultation and construction the first section of Porirua City Council and Plimmerton Rotary’s joint effort to provide a pathway around Pauatahanui Inlet is complete.  Almost 2 kilometres of pathway makes it possible to walk, run or ride from Motukaraka Point to Pauatahanui Village and then into Whitby via Joseph Banks Drive.

At the club meeting on Tuesday evening, 80 guests and members enjoyed video and slide shows covering the 10 years of progress on the pathway. Roger Fitzpatrick, visiting from Australia,  was recognised with a Community Paul Harris Fellow presented by DG Deb Gimblett.  Roger and Ron Lucas were the visionaries whose persistence and perseverance has got us this
far. 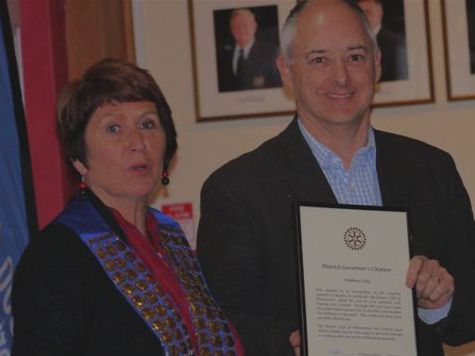 Andrew Gray of Porirua City Council has also been involved with the pathway from the beginning and he too was recognised by District 9940 and Plimmerton Rotary with a District Governor's citation presented by DG Deb Gimblett, who was accompanied by her husband Neville. 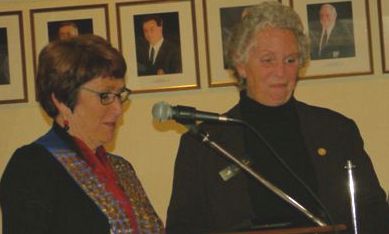 Another District Governor's citation was presented to Wendy Betteridge for all her hard work and the hours of time spent on getting the Plimmerton Rotary website established. It is a very successful

website model for other clubs, and the comment has been made that it is one of the best Rotary websites in the District if not in New Zealand. 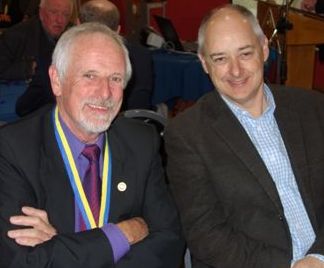 Congratulations to Wendy, Andrew and Roger.

Planning is already underway for the next section of Te Ara Piko. When the approximately 2 kilomtres of pathway from Motukaraka Point to the Camborne walkway at the water ski club is completed, over 9 continuous kilometres will be available for enjoyment of the beautiful Pauatahanui Inlet, by linking Whitby at Browns Bay via Paremata Bridge to Pauatahanui Village. President Ron has thrown down a challenge to achieve this by 2020.

The second evening of celebration and recognition was held at the Lighthouse Cinema on Wednesday 28 May with MPs Hon Hekia Parata and Jan Logie present. Chris Gollins in his inimitable style MC’d the occasion and Mayor Nick Leggett cut the ribbon with President Ron to declare the First Section of the Pathway open.  John Burke as former Chair of Mana Community Grants Foundation and Brian Jenks of Guardian Trust spoke on past and present funding involvement, and President Ron stressed the future funding needs to meet Rotary’s commitment to our pathway partner, Porirua City Council,  of dollar for dollar contribution.

An innovative video by Hayden Smith of Samuel Marsden School, Whitby won the video competition open to school students, with the prize being $2000 towards media equipment for the school.

Michael Thomson of Altitude Imaging Ltd’s amazing video of the Pathway filmed from one of his drones on a recent perfect Porirua morning was very impressive on the big screen at the Lighthouse Cinema.  The marketing potential of the video is huge.  Click here to read Phillip Reidy’s article on the filming event and to see both the videos.